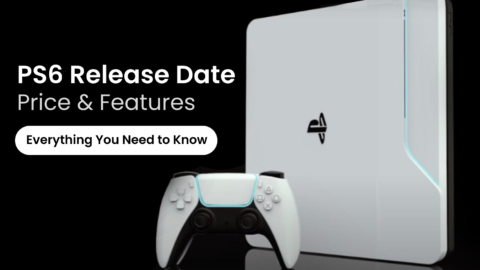 Many leaks, rumors, and facts point toward the Sony PlayStation 6 Release date being far closer than our expectations. Sony did aggressive hiring for PlayStation development. Sony already has filed and received trademarks for the PS6. Moreover, Sony is building some new accessories that are incompatible with the PlayStation 5. This all points to the fact that the PlayStation 6 release date is close.

There are a lot of sources providing a variety of information about what to expect from the PS6. This includes details about PlayStation 6 Launch Date, Price, Features, and specs. So, we have got you in-depth information about the Sony PS6 release date, pricing, and more.

Sony releases new PlayStations every 7 years. By that logic, PS6 should come out in 2027. But that is changing. The PlayStation 6 release date could quietly possibly be earlier than.

There are plenty of rumors and speculations about the future of Sony PlayStation gaming consoles. Some of the best

Based on Sony’s latest hirings, trademark filings, and product development news, it is possible that the PS6 release date might be somewhere in late 2023 or early 2024.

Why? Well, there are a couple of reasons.

Reports show Sony has started hiring for multiple positions in future product development related to the PS6. A Sony patent has revealed a new mysterious cartridge accessory. But it may be incompatible with the PS5.

So this rumor hints that maybe Sony is already working on the PS6. Else, what would this accessory be for? This would mean that the PS6 release date is really close.

This is an example of how Sony will try to implement Planned Obsolescence on the PlayStation 6 release date. Companies try to build products that are like time bombs. They become useless after a particular period of use.

Technology companies make machines with tactics like irreplaceable batteries or incompatible accessories. In 2 years, phones/laptops’ battery loses their capacity, and since the battery is irreplaceable, they have to buy a new phone/laptop.

Sony might be trying something similar. Their accessory would be incompatible with the PS5, so customers would be reluctant to buy the PS6 to use the accessory.

Trademarks are registered close to the launch, suggesting a nearby PS6 release date.

However, it is possible that Sony might be proactive and try to avoid someone else getting the trademarks.

PS5 Pro is Cancelled to make Way for PS6

New Playstation games are released every 7 years. After a few months after the PlayStation launch, sales started to cripple. 7 years is a long time, and Sony needs something to boost sales.

Earlier, this job was done by the Pro versions. The PS4 Pro bridged the gap between PS4 and PS5, giving a much-needed boost to sales.

Sony has confirmed there will be no PS5 Pro. But Sony won’t let the money-making opportunity go. So, Sony will have to get a closer PS6 release date for better sales.

Sony PS6 Features list will be huge. Sony has been trying hard to level up its hardware allowing its consoles to compete with expensive Gaming PCs. Sony is looking to redesign the PlayStation as well.

This is because one of the most talked-about features of the PS5 was its unique design. It made it difficult to store. It was way too big for most consumers. Consumers also wanted something in less flashy colours.

That’s why the PS6 would be intended to have a smaller, much more compact design.

Besides, performance was a big issue with PlayStation 6.

Regardless of the PlayStation 6 release date, you can also expect a significant jump in performance. The PS5 significantly improved performance allowing support for far better graphics.

This is primarily to compete with similar-priced PCs that today perform as well as these PlayStations.

Besides, Playstation 6 Release Date, you must be curious about the PS6 Price. I have firm hopes for a digital-only PlayStation.

Now that you know about PS6 features, you might be excited to buy it. Sony is really trying to do long-term thinking. That’s why it has been able to plan even the PS9 Release Date.

Sony knows that they need to remain ahead of PCs to survive. In tough competition, they would have to significantly improve performance and graphics to stay relevant in the landscape of gaming. That’s why the PlayStation 6 release date could be as close as 2023,

PS6 Price predictions more or less are speculations. Unlike the PS6 release date and PS6 feature list, we have fairly little pricing information.

PS5 sold at MSRP for quite a while due to the lack of supply and high demand. This was caused as a result of global chip shortages.

Hopefully, such problems won’t come in future releases of PlayStation. This will mean the PS6 price could see heavy discounts after its release.

Sony is always tight-lipped about the specs of there gaming machines. Generally, they use multiple hardware vendors to assemble their gaming consoles, meaning there are no fixed specs for the PlayStation.

The Sony PS6 specs would likely support 4k @ 120hz in the most demanding games. It will also support enhancements like ray tracing and provide a more responsive user experience.

You can expect them to outperform similarly priced gaming laptops and PCs because of the software optimizations implemented by Sony and the native game developers.

Will there be a PS6?

Yes. There will be a PS6. Sony has already started developing the PlayStation 6. And the PlayStation 6 Release Date could be fast approaching as well. Sony confirmed that there would be no PS5 Pro, so it’s possible that Sony will have the PS6 Release sooner than expected. So, you can expect the Sony PS6 reveal in a couple of years from now.

When Will PS6 come out?

The Sony PS6 will come out in late 2023 or early 2024 and would be focused on increasing the gaming performance of PCs. Sony is actively working to prepone the PS6 release date to 2023.

When did the first Sony PlayStation come out?

Sony’s first PS came out in December 1994 and was limited to Japan. Gradually it spread to various countries over months. The PS1 got released in America in September 1995.