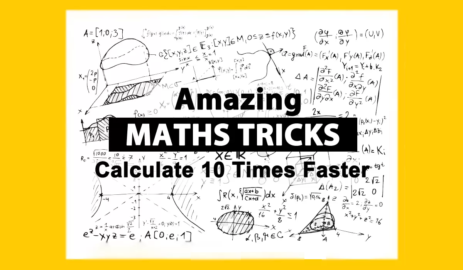 Juggling numbers isn’t everyone’s forte—even though math manages to sneak its way into our everyday lives. Fortunately, these easy-to-remember math tricks will be your best friend next time you’re faced with a tricky equation and don’t have a calculator handy. Also, don’t miss these math lessons you’ll actually end up using in real life.

Did you enjoy your dining service? Leave your server a 20 percent tip with this easy math trick. According to Kate Snow, author of The Math Facts That Stick series, all you have to do is divide your check amount by five. For example, if your check comes to $85, divide that by five and your 20 percent tip will be $17. For more on tipping, here’s our guide on how much to tip in every situation.

Multiplying two-digit numbers by 11 is a breeze with this clever trick from math.hmc.edu. Simply add the two digits together and place the sum in the middle. For example, if you’re multiplying 25 by 11, add the two and five together to get seven, and place the seven between those two numbers to find the final answer, which is 275.

To double a large number, multiply each individual number by two and add them together. Snow suggests starting from the left to make it easier to keep track of the numbers. “For example, to double 147, start with the hundreds place. Double 100 is 200. Double 40 is 80. Double seven is 14. Add them all up (200 plus 80 plus 14) and you get 294,” says Snow. If you think you’re a math expert, try out these arithmetic problems.

Multiplying numbers that end in zero

Even equations involving large, intimidating numbers that end in zero can be easily solved with this handy trick. According to education.cu-portland.edu, just exclude the zeros from the equation, then add them back in afterward. For example, if you’re multiplying 600 by 400, exclude the zeros and solve for six times four, which is 24. After, count the total number of zeros that were in the original equation and tack them onto the number you solved for to find your final answer. Since there were four zeros in the original equation, your final answer for this example is 240,000. This is how mental math works.

If you don’t have your nines times table memorized, not to worry. According to Snow, to multiply by nine, simply multiply the number by 10 first, then subtract the original number. For example, if you need to multiply nine by 23, multiply 23 by 10 to find 230. Then, subtract 23 from 230 to find your final answer of 207. We know, math can be a headache—but these clever math jokes are even hilarious to non-mathematicians.

Turning a repeating fraction into a decimal

According to businessinsider.com, there are three steps you’ll need to follow to easily turn a repeating decimal into a fraction. First, find the number that is repeating. For example, in the number 0.636363…, 63 is the repeating number. Then, figure out how many places that number has. In this example, 63 has two places. Finally, divide the repeating number by a number that has the same amount of places made up by nines, which would be 99 in this case. Reduce the fraction of 63/99 to 7/11—and done.

Not everyone has their 25 times table memorized, but that’s not a problem when you think of each group of 25 as a quarter. “If you had 17 quarters, how much money would you have? Every four quarters make a dollar, so 16 of the quarters equals four dollars or 400 cents. The extra quarter adds 25 cents, for a total of 425 cents,” Snow explains.