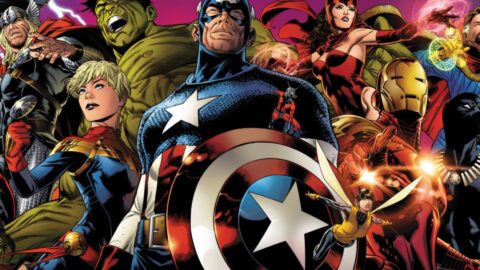 Marvel Comics is very huge and consists of a lot of various characters who are too powerful. Today we are going to know about such powerful characters in Marvel Comics That can defeat anybody. Now there are Multiple characters in The Marvel Comics who are very powerful but We are just going To talk about top 5 characters and maybe your favourite ones Would not be included in this list, so please don’t mind enjoy the list.

No doubt Thanos is considered as one of the most powerful and intelligent villain in Marvel Comics, but in the movies, MCU has portrayed this character In a very humble manner. But in the comics it is totally opposite, thanos is known as ‘mad Titan’ whose only goal is to kill half of the Universe just for his love “mistress death”.

But the reason why he is in this list because, In comics he is a very powerful character who even Defeated the galactus And other characters who are superior to him.

Galactus is a cosmic entity who has always played an important role of Anti villain in Marvel Comics. The reason why I have chosen him to put in this list is because once he has defeated celestial as well, and a full fed galactus is capable enough to defeat Dark Dimension entities like dormammu and other ancient gods of Marvel. Galactus is so huge that Everytime he needs to consume the energy of an planet by eating it to keep himself Powerful. There are uncountable planets in the entire Marvel Universe which Became food for Galactus, And being and cosmic entity, galactus have witnessed Big Bangs and other Cosmic events.

Null is one of the most powerful entity in the Marvel Universe who Came into existence even before the birth of light. Nal used to live in Dark Dimension away from the reach of light,And the reason why I have kept him in this list isHe have defeated one of the most powerful cell skill andCutted of his head which we have seen in the movie Guardians Of The Galaxy. If you still want to, Calculate the power of null then you need to know one thing that in one of the comic, knulll has teared santry in two different parts without any efforts. He is also known as god of symbiotes who created his symbiote Army which includes Carnage, riot and Venom as well.

Now after the eternals movie, I guess everybody has come to know who Arishem is. In Marvel Comics Arishem is the judge of all the celestials and is counted in Higher class of celestial beings. Arishem knows everything about the universe as he has created it by himself, his only job is to judge each and every life form existing in the entire Marvel Universe. The rate of celestialAre also called as pageare also called I face Gods in the comics because they are way too powerful and Unstoppable, all though there are only few characters in Marvel Comics who are capable enough to defeat Arishem the judge.

This is one of the most powerful versions of Hulk because it is controlled by one of the most powerful entity in Marvel Comics named “one below all” who is the Alter ego counterpart of “one above all”. Cosmic Immortal Hulk is capable enough to defeat anyone in the entire Marvel Comics because he consumes the power of one below all Who is the ruler of hell And all the Demons. To get a brief knowledge about power levels of cosmic Immortal Hulk, Then you must know that he can destroy multiple planets by just his single punch. His body’s Re-generating power is way more Advanced than Deadpool.