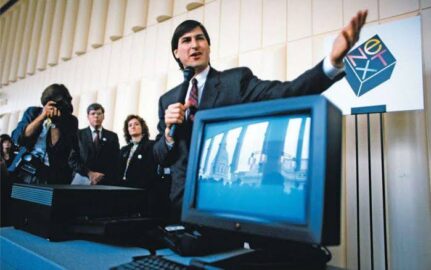 #SteveJobs in #1984 was working on #Macintosh computers. Engineers working on Macintosh were asked to reduce 10 seconds from boot time. Disagreeing with it, #engineers refused to be able to reduce even a millisecond from it. Steve Jobs, addressed engineers to say, ‘would you reduce it’s time if someone’s life depended on it.’ His point was thousands of people would daily waste 10 seconds more booting the Computer. The sum time amounting to many lives. Few weeks later the same team, came up with rewritten code and reduce the time by 20 seconds. Now That’s Amazing Steve Jobs, coined this term and is often used to talk about its presentation skills. Most of the people describe it as a fancy name for Pretending or lying, while I call it a real gold. It doesn’t really mean #pretending it can be better called mind game. When you without saying something make people fell in a particular way it is called #RealityDistortionField. The most common story about Reality Distortion Field include folowing: When Steve was working at #NextStep. He had #JonathanRosenberg, who would later join #Google and many other’s come up to see his newly designed software. During presentation they knew many things were wrong but couldn’t express how they were wrong. After meeting confused as they went back to car parking they realized Steve waiting for them, to express more thoughts. Finally they had to agree with him, even though no one approved it. The thing is he didn’t say a word about inportance of the work, he always presented it as a cause. When he launched #iPod he didn’t say 1GB storage, he said 1000 songs in your pocket. Now that feels good. Here’s the Thing. You have to put stuff in perspective. You have to give people a cause or a motive for which they work. And that’s it that #perspective will change the whole thing. Let’s apply steve jobs in our life and see how it is ‘Practically Magical’