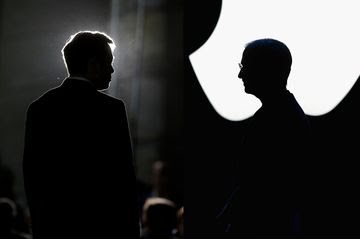 Is Elon Musk The Next Steve Jobs: The Visionary Leaders

Elon Musk is the man behind Tesla, SpaceX, Solar City, Neuralink, OpenAI. Steve Jobs has changed world with Apple, NeXT and Pixar. But is Elon Musk the next Steve Jobs. Elon Musk is not the Next Steve Jobs. Elon Musk is changing the world, he wants clean energy to run vehicles, fast transportation with hyperloop, and wants to take humanity on Mars. Steve Jobs in his life challenged Status Quo, he faced lots of hardships, and changed the world in dramatic way. He brought Graphic User Interface to PCs. He brought the first true personal computer. Steve Jobs was a important person in advent of Animated Movies They both were really successful in there respective fields and no one can deny the hard work that they did. Let us discuss the main similarities between them

Steve Jobs and Elon Musk both were really hard working. Steve Jobs when returned to Apple in 1997, he worked day and night to save Apple, which was going through cash crunch. At that time he was CEO of Pixar also. He used to work tirelessly, and swiftly switch between 2 companies. Steve Jobs had a great vision and could be hard on employees. Elon Musk is also CEO of multiple companies, he works around 100 hours a week. He finds it difficult to get time for his family. And is really considerate about his work, he gets emotional at all mission successes

They both are dropouts. Though Elon Musk has very well studied in Queens University. But his attitude was that there were better girls in it. He later dropped out from Stanford after 2 days of joining it. Steve Jobs studied in Reed College for 6 months and then dropped out, though he used to drop in to some classes that he liked.

Ousting From Own Companies

This is another common thing amongst the 2. Steve Jobs unceremoniously ousted from the company that he found by a person whom he himself hired for Apple. Elon Musk though faced ouster less tragic and that was at early days of PayPal and Zip2, but as soon as someone else became CEO, there were decisions being taken against his wish and he decided it was time to leave his company. Now Let us Discuss Why Elon Musk is not the Next Steve Jobs. I respect Elon Musk For his work. But here we are discussing the differences in personality of Elon Musk and Steve Jobs and it is not to criticize either of the 2. Both are really successful, and comparing them with the products that they made would be comparing apples and oranges. But here i would compare personality, and the lifestyle of #SteveJobs and #ElonMusk. We would be discussing personality, lifestyle, personal life, and characteristics of the 2 visionaries.

Steve Jobs had many girlfriends, he even had a child with his innitial ones without ever marrying her, he even tried to deny himself being father. He git married in his 30s. But his marriage was a good one. Lauren Powell Jobs and Steve Jobs were affectionate for one another, and they understood and trusted each other, there marriage went untill his death seperated them. Overall his love life was peaceful and settles Elon Musk has had complicated Relationships, he married his College Girlfriend, Justine Musk, then divorced her 8 years later. He then Married Talulah Riley and again separated 2 years later. He then got into affair Cameron Diaz.

No one can doubt the marketing and public speaking skills. He created a wonderful brand image, he wanted his advertisements to have a soul in them. And his keynotes were energy packed, and wonderful. Steve Jobs with his Reality Distortion Field, could make employees believe in anything and everything. He is very well renowned for his skills. Elon Musk does not like marketing, Tesla doesn’t run any television ads or marketing campaigns. As far as public speaking is concerned he is a good speaker, he like Steve Jobs delivers all the company keynotes, but they are not that magical. Elon Musk is not that amazing in it. Elon Musk in all interviews and meeting is known to think a lot before answering, showing his careful attitude.

This is the major difference amongst the 2. Steve Jobs was a really focused person, he could forget everything and focus on his work. Elon Musk no doubt has a lot of focus. But he has too many companies and works, that doesn’t allow him to give his 100% to a particular one. Added is his constant disputes and quarrels, due to his tweets he had to pay $20 Million fine to #SEC, and just recently again tweeted a disputable tweet. His personal life troubles also add up to his complicated life. I personally feel Elon Musk is a person who will be more famous, because he constantly come into news, irrespective of the news being some good thing or a rubbish tweet. Elon Musk lives a lavish life with a luxurious home, but Steve Jobs believed in simplicity. He lived in a simple home, and had really simple furniture, allowing his to finish all distractions from his life.