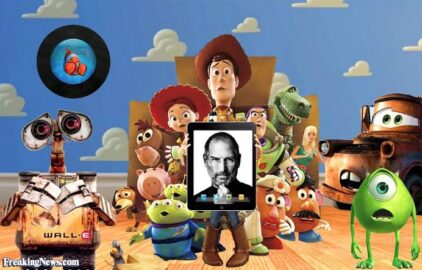 Steve Jobs involvement in Toy Story made the whole thing possible. Jobs in a talk with Disney officials told that he was unhappy, with what Pixar and Disney were doing. He wanted to make animated movie. #Disney agreed. And it was the #ToyStory. And it was what kept #Pixar alive, when its sales were not enough. After many discussions and agreements it was decided that Disney would own the rights of characters in return for 12.5% share of revenue given to #Pixar. Pixar had amazing 3d animation technology that was far ahead of time. They were envisioning the movie to be called Toy Story. In 1991 Steve Jobs negotiated with Jeffrey Katzenberg (then at Disney) for Pixar’s first 3 movie deal. When Katzenberg insisted on owning the Pixar technology Steve resisted: “You’re giving us money to make the film. Not to buy our trade secrets.” Katzenberg relented and a 3 movie deal was struck. Disney would provide financing and distribution. Pixar would keep its technology. It was Steve’s idea to take Pixar public the week after the release of their first film, Toy Story. He went on to lay out his logic: Let’s assume Toy Story is a success, he said. When that happens, Disney CEO Michael Eisner will realize that he has created his own worst nightmare: a viable competitor to Disney. We only owed his studio two more films under our contract, then we could go out on our own. Steve predicted that as soon as #ToyStory came out, Eisner would try to renegotiate our deal and keep us close, as a partner. Steve said he wanted to be able to negotiate better terms. He wanted a 50/50 split on returns. In order to fulfill these terms, however, we would have to be able to put up the cash for our half of the production budgets–a significant amount of money. And to do that we would have to go public. Steve turned out to be right. As our first movie broke records at the box office, our initial public offering raised nearly $140 million for the company. And a few months later, as if on cue, Eisner called, saying that he wanted to renegotiate the deal and keep us as a partner. He accepted Steve’s offer of a 50/50 split. The #IPO was awesome, it was innitially planned for $14, but Jobs insisted $22. But on opening day but it surpassed all expectation, it went as high as $49 before settling in for $39, at the end of day. Steve Jobs designed Pixar’s fifteen acre campus. Inside and Out. In the mean time, when #NeXTSTEP computer was released it gained major hype. In 1990, sales of NeXT were $28 Million, much less than Sun, who had $2 Billion in sales. #IBM decided to not renew there license for software with NeXT, as a result he had to make his software available to public for licensing. His Pixar was going well, and developing according his expectations. His family life was great, as he was now married and a farher, but NeXT was in trouble. There were less revenue. Industry was dominated by Microsoft, Apple was no where to see. In 1993 he had to take a step, that he could have bever dreamt of. He decided to finish production of NeXT altogether. This meant all production team would be layed-off, his production facility, that he put lot of effort in would be sold to Auction, and NeXT shall be a software first company, making and licensing software. Apple meanwhile due to Microsoft dominance was seeing a reducing market share, in the innitial years of Apple without Steve Jobs, there high profits, due to high priced goods and benefit of better #market position. Apple saw a market share of 1996. Apple have had a new CEO in 1993, and then another in 1996. Steve Jobs with Larry Ellison, even planned to acquire Apple for few billion dollars, so that Steve can be there. But Steve said, had Apple invited him back it could have been different. Apple under CEO Gil Amelio lost $1 Billion in first year. He promised to find a alternative software that will be having better memory protection and networking, so that it can take Apple up. But problem was he didn’t have a alternative. The operating system they were coding was still quite RAW, and it won’t be ready anytime soon. They started searching alternatives, and as you can expect the top level would have never talked of havinf Steve Jobs again Rather a mid level NeXT employee, had been continously pinging Apple to have a look at #NeXT software. Some mid level talks initiated between them without #SteveJobs knowing. Amelio was hesitant to call Jobs, but probably God helped him with it, as Steve himself called with him while in a flight and planned to have negotiations after he returned.