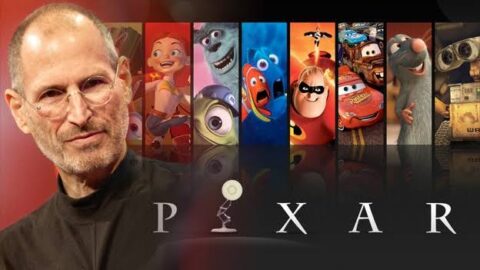 Steve Jobs got a chance to meet #EdCatmull, who was running the computer division of George Lucas’s film studio. They were doing great animated short films, far behind the competition. He liked whatever they did. After few attempts to sell there company, they decided that they would seek for investors. “I wanted to buy it because I was really into computer graphics,” Jobs recalled. “I realized they were way ahead of others in combining art and technology, which is what I’ve always been interested in.” Steve Jobs was #CEO of #Pixar from 1986 until its acquisition by The Walt #Disney Company on May 5, 2006. Steve purchased Pixar from George Lucas for $5 million with the agreement that he would invest another $5 million to fund the company. After some negotiations it became $10 Million, for 70% stake in the company. Later Steve invested another $54 million (of his own money) into the company before Pixar pivoted away from making hardware and toward creating computer animated feature films. The company was named Pixar, after the name of there first PC pixar.   Steve Jobs made Pixar stronger: Steve was hard charging and relentless. A conversation with him took you places you didn’t expect. It forced you not just to define but also to engage. And that in itself had value. Steve made Pixar’s movies better: Once or twice per movie, when a crisis loomed, he would inevitably come in and say something that helped alter our perceptions and improve the film. Whenever offering a note, he always began the same way: “I’m not really a filmmaker, so you can ignore everything I say…” Then he would proceed, with startling efficiency, to diagnose the problem precisely. Steve focused on the problem itself, not the filmmakers, which made his critiques all the more powerful. If you sense a criticism is being leveled for personal reasons, it is easy to dismiss. You couldn’t dismiss Steve. Every film he commented on benefited from his insight. The main focus was selling or licensing the hardware and software they developed for animation. They had limited success (think the ballroom or magic carpet scenes of Beauty&The Beast and Alladin). So for a very long time Pixar was a huge money hole and the only person who believed in them/funded their short movies was Jobs, from a creative standpoint Jobs got out of their way and handed them money to make short movies even when he was down to his last 10mil and these shorts were still very expensive. Toy Story was of course the saving grace of Pixar and spurred box office hit after hit. They tried to sell Pixar many times and in this area I understand Jobs actually got in the way.. a lot, when reasonable deals were close to being made he would ‘throw his toys out of the pram’ and screw everything up. Some would say this is because he saw the true value that others didn’t, some would say Jobs was stupid. In the end Pixar was sold for a mind staggering profit, thanks in large part to Jobs, and while a lot of people were scared that Disney would swallow up and water down Pixar the heads of Pixar ended up as heads at Disney and saved a once legendary company. I don’t think anyone can deny that Disney Animation had fallen very far in the 1990s and is now in a considerably better place thanks to people like John Lasseter. Hercules or Frozen? You decide. Steve negotiated Pixar’s sale to Disney for $7.4 billion. He felt Disney was the best partner for Pixar due to Disney’s mastery of consumer products and theme parks. He felt Pixar was vulnerable due to its relatively small size and that it would find safe harbor with the much larger Disney company. Steve said: “Right now Pixar is a yacht. But a merger will put us on a giant ocean liner, where big waves and poor weather won’t affect us as much. We’ll be protected.”  Even if Pixar suffered a few poor performances at the box office being part of Disney would ensure its survival. Steve loved Pixar. He once said in his next life he hoped to come back as a Pixar director. And it was the stake from Pixar that took his major portion of net worth at time of his death. The Pixar stake earned him a really valuable portion, when it was acquired by Disney, and #Apple stake was quite less.