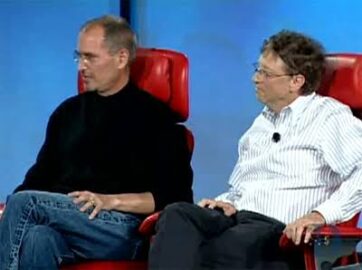 Bill Gates and Steve Jobs: When 2 Legends Met to Change the World

History has witnessed many great partnerships of 2 legends that together changed the world. Few of these include the partnership between,  Albert Einstein and Niels Bohr another included Thomas Jefferson and Alexander Hamilton. Another such greta partnership has been between Bill Gates and Steve Jobs. The leaders of Microsoft and Apple respectively. When most of the people hear the names of Apple and Microsoft together they assume rivalry. But there vision was different. They considered them to be great partners. This was seen years later when Apple was sinking, and it was the funding from Microsoft and return of  Steve Jobs helped it rebound. Similarities of Bill Gates and Steve Jobs included common interest in technology, eager desire to change computer world, and capability to have a far vision. They were 2 dropouts born in same year – 1955. Bill Gates Unlike Steve Jobs was from a family where father was a lawyer and mother was a civic ceader of variety of boards. He didn’t spend his childhood making “Blue Boxes”, and had a quite good hold over coding. He was really good at coding and was more practical, logical and empathetic than Steve Jobs. His tantrums from childhood include making, making a software for his school that helped schedule classes, though rather than a social cause, he used it in his own favor to get seated with girls of his own choice. Jobs and Gates were different in there personalities and qualities but technology united them to a partnership. Jobs used to look down and Gates, because he had a bad taste of things, and was not as good in getting creative ideas and going into minor details. On other hand Bill Gates, used to look down at Steve Jobs because, Steve Jobs could not do coding. He considered Steve Jobs to be having a bad and arrogant personality. Though Hertzfeld has told, that Gates used to be intrigued by the fact that how he could influence and persuade people. That was a part of Reality Distortion Field. Bill Gates later in life realised how good he was at imagination. #SteveJobs did not have much knowledge about coding, but still he could imagine the future and understand what could be a great product. And he understood it in many cases. The biggest including the #Xerox #PARC one. Where Steve Jobs learned the idea of Graphic User Interface or #GUI, and was enlightened but Gates realised his potential late. There partnership started with Macintosh. Jobs wanted the best software for Macintosh, and he saw the capability in #Microsoft. He wanted Bill Gates to write a version of Word processor, a Spreadsheet software and a version of BASIC for Macintosh. Steve Wozniak had written a version of BASIC for Apple II, but he couldn’t update it to handle Floating Point. Bill Gates to get it done. Apple was a much bigger company at that time when compared to Apple. Microsoft wanted to be as big as Apple. It, like Apple, wanted to be the next #IBM, and had bet there company for it. Microsoft had more engineers working over #Macintosh than Apple it self. Jobs admitted that #Microsoft made crappy software but improved it very quickly. Bill Gates was amazed by the smooth animation of cursor that #Apple had achieved, and it took him some time to accept that it could be achieved without using any additional software. Apple made a deal to allow Microsoft to write all of the BASIC programming for Macintosh, in return for a agreement under which Microsoft will not make a version of its Spreadsheet software for next 2 years. Microsoft grabbed the deal. Initial plan to bundle Microsoft Applications with core Macintosh software was dropped, as it would upset other developers. The decision to unbundle Microsoft software was financialy beneficial to Microsoft as well. The Microsoft Excel was launched for Macintosh at a separate press dinner at Ney York’s Tavern on the Green. In 2007, Bill Gates and Steve Jobs were interviewed in All Things Digital. Where they talk about the rivalry between PCs and Mac. “Kara: Are you competitors? I have to admit, I really like PC guy. Steve: The art of those commercials isn’t to be mean, it’s for those guys to like each other. PC guy is great. PC guy is what makes it work! Big laughs.” – Engadget  Apple’s goal is much more modest than world domination, said Jobs. “We don’t think we’re going to have 80 percent of the market,” he said, doubtlessly disappointing legions of Mac enthusiasts. “We’re happy when our market share goes up a point.”