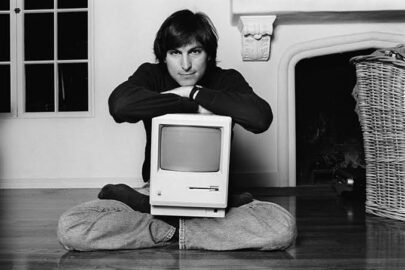 Steve Jobs and the Journey From Apple 1 to Macintosh

Steve Jobs and Steven Wozniak were the two main founders of Apple. Woz was more active during the earlier part of Apple. He was the man behind the first 2 computers of Apple, the Apple 1 and the Apple 2.

At that time Steve Jobs was living with Cristann Brennan who had been making fun stuff with him. They both enjoyed each other, and she loved his crazy attitude towards things. It was later that they starting going out together

The PC that they made were not much radically different from market, it was that they made a better deign and better PC by integrating keyboard etc. together into one pack. They had put a case over it.

As far as the question goes, it is not the first PC that #SteveJobs made, it was Steven Wozniak’s PC. Now after this as you can expect Steve Jobs wanted to make his own contribution so that Steve Jobs can settle scores with Woz.

Brennan got a baby, and told that Steve was the father but Steve stated that he was not the only one with whom she was in bed, and therefore he refused to admit himself to be the father. Later as it turned out due to judicial works he had to accept it when he was found to be father in paternity test, and provide his daughter Lisa Brennan Jobs some compensations including some monthly payments.
Later on… while building the PC that would be his own he named it Lisa. To remember his daughter. Lisa was a step in right direction. That was first PC that had things that were new to market and had better design.
But still he wanted to something more radical more dramatic but he couldn’t understand how. He got the right idea of what he wanted to do while doing Macintosh.
There have been many allegations Of Bill Gates stealing Steve Jobs’ idea of Graphic User Interface or #GUI for #Apple. Today we disclose the whole story including #Xerox link. #BillGates did not steal Steve Jobs idea. Gates himself stated that he went into Xerox’s home to rob it, when he realized Steve had already stolen it. Though it was a metaphor, for what happened. Confused? Don’t worry I’ll explain.
Bill Gates stated in this context as follows, “Well, Steve, I think there’s more than one way of looking at it. I think it’s more like we both had this rich neighbor named Xerox and I broke into his house to steal the #TV set and found out that you had already stolen it.”
Story is that Actually Steve Jobs and Bill Gates were invited to Xerox Palo Alto Research Center in 1980’s where they showed up revolutionary idea of GUI, Internet and Mouse, Steve got enlightened and got to develop it. Bill didn’t got much into it and later when he realized it’s potential he went into developing it
And now whole of the industry runs on Graphic user interface. Steve Jobs was good at realizing potential of newer technologies. Xerox could have governed the whole of computer industry but they missed the opportunity.Steve Jobs had already taken there idea so Bill Gates didn’t stole anything from Steve Jobs. Because it was the idea of Xerox.
If you are wondering that Steve Jobs might have stole the idea then that is wrong. The Palo Alto Research Center was highly confidential and no visits were allowed but when Steve Jobs allowed Xerox to invest in Apple at $10 per share he also got the permission to visit the Palo Alto Research center along with the team.
So after that he developed the #Macintosh with Graphic User Interface, where each alphabet was not a character but a no. Of pixels. The result was that each and every alphabet looked beautiful over it. But made the whole PC slow.
The Xerox PC when shipped was over expensive and when Apple dissected it they found many things wrong and that was a relief to them, as it meant that they were ahead in competition.
When Macintosh shipped it was not received well. Because the GUI required more processing power, which PCs that time were incapable, this made it slow. Most people thought that Computer had to be something of industrial use rather than personal, therefore it took long to understand potential and also, people couldn’t understand the concept of GUI. As a result Lisa was what sold the most and brought them funds, even though Macintosh was a more revolutionary product and today Macintosh is only remembered but that time, it was Lisa.