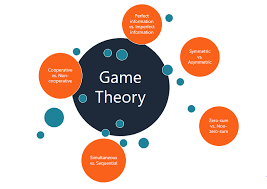 We often stumble with situations where we reach to situations where we have to take decisions and both the choices seam equally right. Here comes the use of Game Theory, a way where based over a rational principle you take decision, where you benefit irrespective of what other variables happen to be. It is a situation where if you are competing among people for something, you have to take decision in a manner that you win. Now okay, practically that is the idea, but basically it means, that if there is profit then with this strategy you get the highest profit, if there is loss, then you face least loss. And it does not mean you have to remain away from risks. We will explain you Game Theory later with example, but first lets understand what situation are we talking about with this poem from Robert Frost

The Road Not Taken
Two roads diverged in a yellow wood,
And sorry I could not travel both
And be one traveler, long I stood
And looked down one as far as I could
To where it bent in the undergrowth;
Then took the other, as just as fair,
And having perhaps the better claim,
Because it was grassy and wanted wear;
Though as for that the passing there
Had worn them really about the same,
And both that morning equally lay
In leaves no step had trodden black.
Oh, I kept the first for another day!
Yet knowing how way leads on to way,
I doubted if I should ever come back.
I shall be telling this with a sigh
Somewhere ages and ages hence:
Two roads diverged in a wood, and I—
I took the one less traveled by,
And that has made all the difference.

These are amazing words describing the phsychology of the person.

Now let me explain you Game Theory with help of classic example. Imagine a crime situation in which you and another person are being examined, by investigation officers, you are about to have 2 years of imprisonment. Here Officers provide with a method, in which you can either go home free, or you may have to face 10 years of jail. Both of you are tense, both of you have the objective to get the least punishment, and both of you know that either one of you will be having an extra edge at the end of day. The officers have given you chance, and the rules are simple, 1. If you admit crime and the other one doesn’t, then you are free and others gets 10 year jail 2. If none of you admit, then the existing punishment for a two year period remains. 3. If both of you admit, then both get 5 years of jail.   Now what would you do? Game theory suggest that, you have to select the option where you get more leverage irrespective of what decison other person takes. According to it, you should admit your crime. Because if you admit crime, and other doesn’t admit, then you are free, and if other person does then also you get 5 years of jail. Okay you still have chance of 5 year jail, but game theory has stated, that if you profit (go home) then yours is the most profit, and if you lose (5 year jail) then yours is the least loss. Had you not admitted, you would either get 5 year jail or 10 year jail. Thus you have w leverage here. Now this is a example of a finite game. Finite game is defined as a game with fixed players (you and other criminal), fixed rules(terms for playing game) and fixed objective(get least punishment) Here you have to make a decision which you get the bigger slice of cake irrespective of what other person’s decision is. There is another type of game also. It is called infinite game, a game with indefinite players, indefinite rules and the only objective is to continue the game forward, on and on and on… It is something like Russia and America controversy, where both are simply continuing the game. Here the way to succeer is by not taking a different decision, here you have to change the game, you have to bend the rules in a way that only you leverage the game. It will be explained in the following example. “Every once in a while a revolutionary product comes that changes everything, not judt the product bht the entire industry. We have been fortunate to be part of few of them. When we launched iPod, it did not change the way we listen music it changed the whole industry” -Steve Jobs Steve Jobs said these words at the launch event of the iPhone. iPhone was the next big thing that changed the industry. With iPhone they didn’t improve the industry they changed the way we thought about phones, and changed whole industry. Here it was a indefinite game, the rules were not there, and the objective was just to continue game, goal was to gain maximum market share, Apple was a new player in the game. Here Apple didn’t took a decision like in finite game where a decisiongives you leverage. They didn’t take decision to add more battery, or more vibrant display, they changed the game. They changed the way we used them, rather than buttons there was touch screen. It was something no one thought, and it was something that changed the game, it opened hell lot of new possibilities and new apps and web design took birth, that made Apple what it was. It is a different thing that Apple, now under Tim Cook is whole lot different.