Was Steve Jobs wrong when he said that, 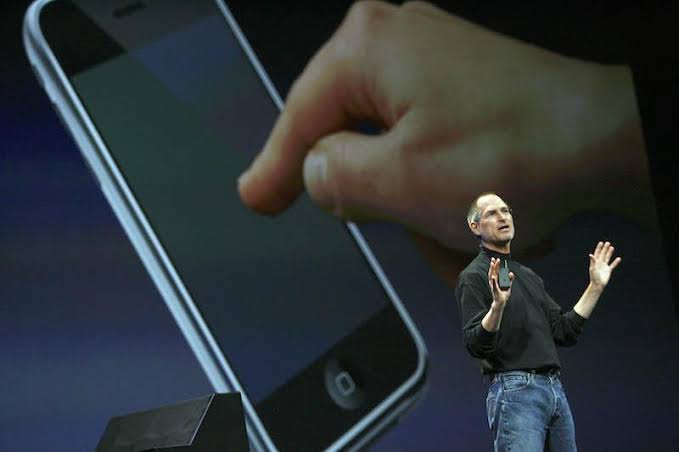 Was Steve Jobs wrong when he said that, “No One Is Going To Buy Them”, about the big Smartphones. Answer is “No, He Was Right”

Back in the boom years of Smartphone many companies including #Samsung brought up many new smartphones, out of which one of the biggest difference from iPhone was Screen Size.

Why The question of Big Phones came into Existence

Those phones were really big, when compared to iPhones. We are talking of the days of iPhone 4.

Back then they shipped with 3.5 inch screen. Due to the issue of Antenna gate, which was basically extensive call drop in iPhone 4, they had a press conference.

During the Press Conference, Steve Jobs in his usual dominating and confident tone, upon being asked by a reporter claimed, “No One Is Going to Buy Them”, Big Phones.

But that was 2010, and by 2012, Steve Jobs was no more, we had lost the Legend in October 2011, One thing we saw after him was large screen sizes 5 inch big sizes seen in iPhone 6, which made reaching edges difficult on #iPhone too.

The reason was that there was a multi billion dollar smartphone market that wanted big screen smartphones. And the Screen Size was one of the biggest problems reported by #Apple Users.

But Was Steve Jobs “Wrong” when he said “no one’s going to buy that” about Big Phones? If you compare 2013 and 2010, then surely Steve Jobs seemed wrong, but coming years were to have a change. As the #screen to body ratios #improved Steve Jobs was again proven right.

Steve Jobs believed 3.5 inch screen size is ideal for smartphones which was turns out to be wrong.

But, his logic that No One Will Buy big phones still exist. At one point around 5.5 inch screen size seemed max till which any normal human hand could extend, and bigger ones weren’t possible.

But then change came, the mindset changed to increase screen size while making the phone smaller, basically high screen to body ratios.

And Steve Jobs, turned out right average phone sizes increased till 2016s, and then with the forth coming of bezelless displays, came, the phone sizes stagnated, and now only screen grew.

This is because no one wants big phones, people want small phones, and large screens. Smartphone manufacturers were able to fit in more display in less footprint.

The Samsung Note 4 packed 5.7 Inch screen, it was released right around that period, and it’s height was 15.3 cm.

So back then as phones well over 15cm, it was surely logical to say, that people don’t want bigger phones, because it’s difficult to reach 15cm apart the top edge of phone.

And the current generation iPhone 11 pro base model is 14.4cm tall and packs a well around 6inch screens.

Undoubtedly Screen Sizes increased, over the years, but considering that Steve Jobs said no one would buy bigger phones he was right. The iPhone lineup grew taller by 1.4 cm in 10 years. Which is acceptable, atleast I believe.

Then why has there been a false notion about People believing Steve Jobs to be wrong when he said that, “No One Is Going To Buy Them”, for big phones.

When we say big Phones, people assume that Bigger screen means bigger phones, that has been true to some extent, because for most part of the history of smartphones, the increment in screen size directly meant increment in Size of Phone too.

But then the Size of Phone got unlinked from Size of Screen. The phones had better screen to body ratio, which meant that they could increase screen size without increasing size of phone.

Another big #reason , is the aspect ratio, in earlier days, phone’s used to be having screen of aspect ratio 4:3. Which made phone really wide, this width didn’t allow thumb to reach from one end to other end without becoming uncomfortable.

Over the years, the aspect ratio changed, in favor of 16:9, which meant the phones were now taller. And then we went onto 18:9 which is modern day standard, and common use case.

I shall clarify once again, large phone means the dimensions of phone, and basically it’s footprint. Whereas large screen means more area to display things.

In past one year, another new trend which proved that People do not want large phones is the idea of folding smartphones. A device of the size of a smartphone, essentially a small device which unfolds and becomes as big as a tablet.

This gives almost double the screen real estate as of the Body Size. If people loved big Phones, then Foldable smartphones would feel a stupid idea, but it’s not.

Because we hat big phones, no one wants to buy Big phones, though we love big screens.

There was a period when phones became really big, and that period, made people understand screen size and phone size to be the same thing which is not true.

This misinterpretation is the reason why we considered him wrong

Thanks for Reading, Warm Regards, Aditya My Latest Article 17 Secrets to Know: How I optimized My WordPress Site to Load in 927ms.
Tags:#Apple#improved#iPhone#reason#Samsung#screen#SteveJobs