KIA SONET || A LEGEND UNBORN, WILL SOON TOUCH THE SHOWROOMS!

SOMETHINGS TO KNOW ABOUT IT……📁

Kia Sonet has successfully managed to create the hype among the compact SUV buyers. Since the unveiling of the prototype, customers are willing to have their hands on the steering wheel.

Recently the spy shots of the interior have been leaked across the internet and seems a tough competitor for the rivals. Let’s see what does the Kia Sonet includes.

HOW IS THE LEGEND DESIGNED!

First of all the, we have to applaud the design team of the Kia. Kia has mastered at making the right proportion of the car as it’s also seen in the Kia Seltos and Kia Carnival. The concept of the Sonet is almost 70-80 per cent closer to the production-spec. So we can expect the exterior design to resemble the production model by a very good margin. The Kia Sonet concept had very sharp and bold elements. From the front, the compact SUV gets aggressive looking headlamp and DRL unit that merges into Kia’s signature tiger-nose grille.

Coming to the side, the compact SUV posses very unique floating roof design which is kind of hate it or loves it. The tyres shown at the concept were quite big but we can expect around 15-inch or smaller wheels for the production-spec. From the rear, the Sonet has LED taillamps and horizontal LED strip that joints both the taillamp units. The skid plate is cover with a piano black finish and it gets dual faux exhaust. The exhaust gets chrome surrounds. This gives the car a good stand out feature. 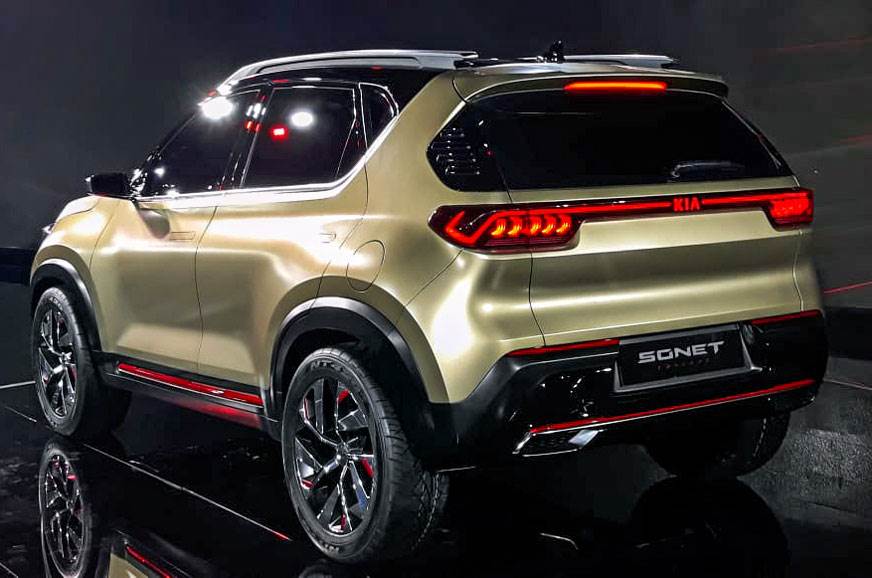 The spy shot of the interior disclosed many features. The interior theme of the compact SUV has a black and beige theme. The seat cover looks premium and upmarket compared to the rivals with the ribbed layout. Looking carefully we can see that the interior replicates the Seltos in may ways. The infotainment screen is about 10.25-inch which was confirmed at the time of the concept unveiled. The sound system might be a Bose premium audio system. Another interesting feature of the compact SUV will be the Kia’s UVO, the smart connectivity feature from the manufacturer. Other convenience features will include wireless charging, cruise control, automatic climate control, auto headlamps, and many more.

After the launch, Kia Sonet will be rivalling Tata Nexon, Ford EcoSport, Hyundai Venue Maruti Brezza and Mahindra XUV 300. Considering the overall package of the Kia Sonet specifications, it will surely give a tough challenge for the rivals.

WHAT WILL IT COST YOU ?