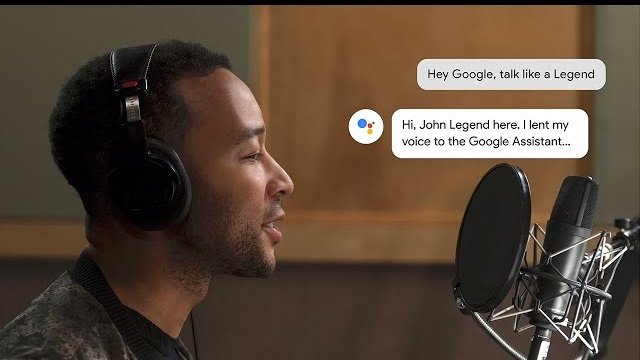 Google uses DeepMind, its Artificial Intelligence based system, that it uses to generate words from sounds. Each alphabet makes different sound as a part of different words.

Google collects the voice samples of the necessary voices, in this case the voice of John Legend. They use this voice sample, to further generate different voices.

The problem with simply joining sounds of alphabets is, that different sounds may not join to form pleasing sounds of words. With creating wave forms, they create sounds as specific to different words.

#JohnLegend is one of the 6 voices that anyone can listen on #Google Assistant by going to its settings and selecting voice.

“WaveNet allowed us to shorten the studio time, and the model can actually capture the richness of his voice,” Google CEO #SundarPichai said onstage.

Google has recorded answers to some questions specifically and therefore given them special care. There are also some easter eggs prepared fir John Legend’s voice, along with the other usual and standard functions.

You can simply go to settings then voice and the select the voice, or you can talk to Google Asisstant saying “Talk Like A Legend”

Thanks for Reading, Warm Regards, Aditya My Latest Article 17 Secrets to Know: How I optimized My WordPress Site to Load in 927ms.
Tags:#Google#JohnLegend#SundarPichai

previousCloudflare adds a VPN To Its 1.1.1.1 DNS Resolver
nextYour Time is Limited Don’t Waste it Living Someone Else’s Life