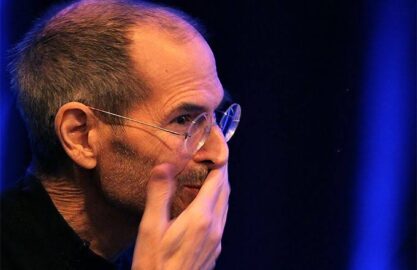 Steve Jobs has an amazing art of convincing people towards something. In front of him, the reality was malleable. This art got coined with the term Reality Distortion Field. There are many examples that prove that Steve Jobs had a talent for convincing and pursuing people for a task. The term Reality Distortion Field was coined by Bud Tribble. The term was taken from a Star Trek episode, where Aliens use it to create their own world.

Steve Jobs was not at all awful, on paper he may seem to be awful, but it was the way of speaking that could make him feel awesome in fact inspiring here is a Reality Distortion Field example to prove it. I will tell you classic office conditions where your employee refuses to be able to do a task and you have to get it done. How would Steve Jobs get it done?

Many times people call Steve Jobs awful, but this is his secret to success, in simple words, Steve Jobs saying an employee, to reduce the boot time of mac by 10 seconds when the employee says he can’t shave off a millisecond.

Disagreeing with it, he refused to be able to reduce even a millisecond from it. Steve Jobs, using Reality Distortion Field addressed engineers to say, ‘would you reduce its time if someone’s life depended on it.’ His point was thousands of people would daily waste 10 seconds more booting the Computer. The sum of time amounting to many lives. A few weeks later the same team, came up with rewritten code and reduce the time by 28 seconds.

When Steve was working at NextStep. He had meet Jonathan Rosenberg, who was at Google and many others come up to see his newly designed software. Jonathan in the book How Google Works gives this Reality Distortion Field example, where during the presentation they knew many things were wrong but couldn’t express how they were wrong. After meeting confused as they went back to car parking they realized Steve waiting for them, to express more thoughts. Finally, they had to agree with him, even though no one approved it.

After he returned back to Apple in 1997, Jobs summoned Apple’s top employees to the auditorium, and, wearing shorts and sneakers, got up on stage and asked everyone to tell him “what’s wrong with this place.” After some murmurings and bland responses, Jobs cut everyone off. “It’s the products! So what’s wrong with the products?” Again, more murmurs. Jobs shouted, “The products suck! There’s no sex in them anymore!” That’s how you make people understand loopholes. By lying you shall not only lose respect but also makes the road more clear.

The thing is he didn’t say a word about the importance of the work, he always presented it as a cause. When he launched iPod he didn’t say 1GB storage, he said 1000 songs in your pocket. Now that feels good. Standing in front of his employees, Jobs told them, “we want developers to write small, efficient code, not Microsoft code.” His logic was that would optimize all over the place.

The limit would become Apple’s advantage by forcing developers to do more with less headroom. The staff seemed to like the logic — Jobs’ reality distortion field at work — but Shelton wasn’t convinced. “I was the only person who wasn’t accepting it because I knew how operating systems grow, how software grows.” Jobs thought developers would make their apps smaller, “but it wasn’t going to go that way,” Shelton says. Software code only ever balloons in size.

With Reality Distortion Field you can even change memories of people when we say who developed the GUI? You would say Apple or you may say, Steve Jobs. But that is not true. I will explain it in a minute. First let’s understand the idea, Steve Jobs basically when heard a new idea from someone which seemed to be good. He would put all his heart and soul to develop it and the result would be that he would talk and interact with so many people in developing it that naturally, people would think it was his idea. If you are confused, then no problem now read that story about GUI and then read this again.

The story is that Actually, Steve Jobs had allowed Xerox had allowed buying some shares of Apple at $10 per share, in return to which Steve Jobs got access to Xerox Palo Alto Research Center wherein 1980’s they developed up the revolutionary idea of GUI, Internet, and Mouse, Steve got enlightened and got to develop it.

Xerox had got a lot of scientists dedicated to developing new technology. Their development took place at a place far from which was known as Palo Alto Research Center or PARC in short. They developed a communication system similar to the internet, they developed a navigation system similar to a mouse, and the third idea blinded Steve Jobs. This third idea was the idea of Graphic User Interface. They have developed it to a great extent. But Xerox wanted to remain in making photocopy machines and as a result, they didn’t get much support. Steve Jobs put his heart and soul into development. He put around a year to work it up so that the graphic user interface could ship with the very first Macintosh in 1984.

Whenever required to make an instinctive decision, Steve was very good at it. Whenever possible try to find out what is right and do it, but if everything seems right then do as Steve Jobs said, “Follow Your Hear And intuition because they somehow know exactly what you want to be.” Most of the time it gets things right and in case it goes wrong most of the time you would be able to go back to it. Be Yardstick of perfection demands perfection even if it is not required. A great carpenter would not put a bad piece of log in a cabinet’s back even if it is going to face the wall. Steve Jobs was the same, he made a last moment circuit redesign to just adjust a small wire. Engineers suggested to let it be as it is, but it was Steve Jobs perfection that he wanted to feel sure that even though it would never be seen by customers still he would be sure that when that night he goes to his bed, he knows that he made the thing as great as possible.

Here’s the thing. You have to put stuff in perspective. You have to give people a cause or a motive for which they work. And that’s it that perspective will change the whole thing. The point is all examples of Reality Distortion Field are just a change of perspective. Unlike manipulation where you present something wrong, or technically you lie, but in reality distortion field is when you present a point that is not lying, but that is not really true also.

Take my favorite example, when Microsoft launched their Zune PDA, they marketed some ‘X’ GB storage. When Apple had launched their iPod they said 1000 songs in your pocket. The point is that it may or may not hold a thousand songs. But the perspective that they presented allowed them to sell to like hot pancakes. They just put things into a different perspective. This is the beauty of the Reality Distortion Field, in manipulation, you lie in order to gain an edge over others. In Reality Distortion Field, you get an even greater edge, and you don’t lie, and this can be seen in all its examples. You just present a different perspective. A perspective that makes other people feel good.

Another Great example of the Reality Distortion Field follows Andy Cunningham, a marketing expert who was working with a photoshoot of Steve Jobs. In a hotel in New York, he arranged tables and chairs for Steve’s Photoshoot. It was a Fortune magazine shoot, Steve Jobs wanted Michael Jackson being played in the background so that he could feel good and get energized for the shoot. So to make Steve behave they had to play “Billie Jean” soon Steve would start to behave.

As soon as the song would get over, he would start to lose control over himself and Andy had to rewind the 1980’s cassette and play it again for Steve Jobs to start working normally The thing is that it does ensure that another person doesn’t get to know about it. In manipulation, if a person has moderate knowledge also, you can be could in the act.

But in the case of the Reality Distortion Field that is not the case. Reality Distortion Field played a really important role in the life of Steve Jobs, and it doesn’t seem that this talent is difficult to imply. All incidences were of day-to-day life, rather than being some real-world war or a serious level of incidences. He is none of the above cases used it does demoralize anybody. Rather he got unwilling things done from Others or in the case of a photoshoot with himself also. We should do the same with ourselves.