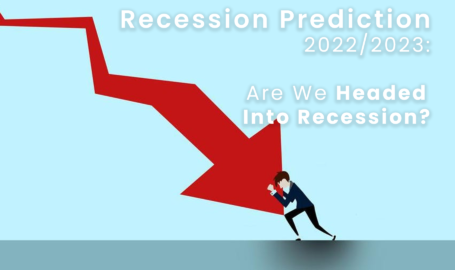 Recession Prediction 2023: Are We Headed Into Recession?

Many major financial indicators worldwide have been signaling a possible recession. It’s high time that we understand the nature of this recession and prepare ourselves well in advance for the economic hardships that might be coming.

CNN reported that there is about 98% that we will see a recession in 2023. The argument of the proximity of the recession has been debated by many analysts, economists, and financial advisors.

But, many significant factors collectively point toward an upcoming recession. Let’s do an in-depth analysis and understand everything.

We’d also be analyzing the global impact of the recession in America.

A recession is tough to predict. First, it’s a rare phenomenon, happening once every couple of years, so things change quite a lot, making accurate predictions difficult.

Secondly, even when we are headed into a recession on a global level, we rarely have a decent way of guessing how good/bad the recession will be.

All these factors make predicting if we are heading into recession even more difficult.

Whenever there’s a significant war, the global economy starts panicking. In the past few months, we have seen Afghanistan being taken over by the Taliban, the Ukraine, and Russia going into a long war, have contributed to fear among business houses.

Furthermore, other incidents include countries like Myanmar coming under military rule and Sri Lanka facing one of the major economic crises of all time.

Multiple countries have been continuously struggling in their matters which have harmed world trade and slowed trade at the international level.

Russia also retaliated against western countries by cutting supplies and reducing trade. The aviation industry still had not recovered from the pandemic and saw a major crisis, with international flights to/from Russia suspended.

If the above-mentioned war didn’t ring a bell, then these direct economic factors will make you believe we are heading into a recession.

Though, it has been seen that even after matching generally accepted criteria, many countries continued to perform well.

However, if you look closely, the CPI (Consumer Price Index), Industrial Production, Unemployment Rate, and many more have been in the red zone for a long time. These are some major multiple economic factors at the global level that point us toward a recession.

While the US economy isn’t at its best, the US dollar is still strong. As the world fears recession, the American currency is considered to be immune to currency crashes due to its immense value on a global level.

As a result, many people are trying to buy and hold American currency to maintain their purchasing power in a significant recession. The world is accepting the American buck.

This is resulting in further economic hurdles in other countries. Since USD is used in International trade, a strengthening of USD means countries have to pay a relatively higher price in their currency for every import (since the price in USD remains the same, but the value of USD is more expensive).

This results in a negative feedback loop, where costlier USD results in reduced trade, which results in economic fear, which in turn pushes people to buy USD, which makes USD even more expensive. This is a critical factor in answering, are we heading into a recession?

What is the Global Impact of Recession?

A Recession in America would mean a financial crunch on a global level. When in recession, countries would reduce their expenses, businesses would defer expansion projects, and individuals would avoid unnecessary spending.

This would have a significant ripple effect on how other businesses work. Many countries that depend on America for a trade would start struggling financially. China, for example, is a very independent country, yet Americans are their significant customers. Most of America’s manufacturing and production needs are fulfilled by the Chinese.

So, the Chinese economy would see a significant slowdown. Many other countries which export oil, minerals, resources, and more to the US would also suffer. Similarly, most other countries would struggle to survive due to the recession.

One of the most critical problems that have made the possibility of recession very high is Inflation. Increased demand with insufficient supply in almost every industry (thanks to Global Chip Shortage) has created a challenging situation for us as consumers who pay excessively high prices due to limited supply.

At the same time, the Russia-Ukraine war has resulted in logistical problems for transporting oil and various other precious elements. This has again caused the prices to rise.

Solving the global supply chain problems is no joke, but still, for the most part, that’s the easiest way to again bring the prices back in control and ensure that markets and GDP can be normalized, pulling ourselves away from recession.

Employment is another major hurdle. After the pandemic, companies adopted many automation techniques and optimized their overall workflow. The shake-up has resulted in fewer than good jobs being available to these workers.

Proper employment and control over inflation would be critical to saving the global economy.

How Can You Prepare For The Recession?

Recession is something that everyone wants to avoid, yet most of us would see at least 1 recession in our lifetimes.

The upcoming recession could be one of the worst recessions in history. So, let’s talk about how you can survive a recession:

Yes, the world is heading into a global recession due to multiple geo-political conflicts, diminishing American GDP, and the simultaneous strengthening of the American Dollar. If things don’t change, we will see a global recession by the end of 2022 or the start of 2023.

Proper steps must be taken to avoid going deep into a recession that would cause significant problems on a global level,