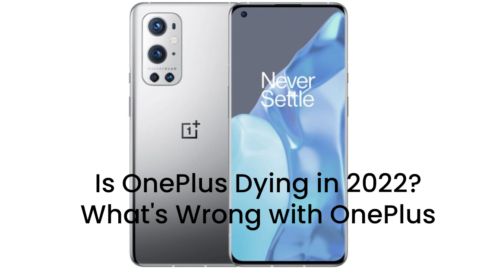 Downfall of OnePlus — Is OnePlus Dying in 2023?

OnePlus was once the most promising android smartphone brand. They brought cost-effective yet flagship-caliber smartphones to the masses. But today, OnePlus seems to be dying.

There are many reasons why OnePlus fans believe the end of OnePlus is near. OnePlus phone prices have constantly been increasing, their lower-end phones aren’t good enough, and after adopting ColorOS, they have shot themselves in the foot.

The fierce market competition means that only the best companies will survive in this market. At one point, OnePlus used to make phones half the cost yet matched almost 90% of the feature set.

They were trendy in developing nations. Yet, today, almost every tech enthusiast and OnePlus fan are scared for the company’s future.

Why Do Big Companies Die After Being Successful?

Lack of purpose or vision is the primary reason for companies failing. Sometimes companies achieve their goal and then don’t know what to do next. In other cases, businesses get distracted from their purpose itself.

Starbucks lost its purpose/vision when CEO Howard Shultz left in 2000. But, when he returned as CEO in 2008, he did a magical turnaround by getting the company on the right path.

Apple saw its decline when its legendary co-founder Steve Jobs left in 1985. They were 90 days from bankruptcy in 1998 when Jobs returned and did a magical turnaround to make it one of the most successful companies of all time.

The downfall of OnePlus is a result of their lost vision of creating cost-effective, high-quality smartphones, poor software support, and the lack of future vision. People loved their Oxygen OS, but OnePlus replaced it with bloatware-filled ColorOS. Moreover, its founder Carl Pei left OnePlus to start another company.

How Did OnePlus Become a Successful Company?

OnePlus started as a crowd-funded project to create mid-range flagship killer smartphones. It was a line of products that were supposed to be almost as good as the iPhone and top Samsung Phones but cost far less.

In an initial couple of years, this strategy worked pretty well. OnePlus was growing and becoming a threat to almost every big company. They put only the most useful/relevant features and avoid unnecessary ones.

Some brilliant marketing campaigns fueled their fast growth. One of their campaigns, “A Day’s Power in Half an Hour,” effectively promoted their fast-charging capabilities.

For many years OnePlus dominated the mid-range smartphone market. However, it meant that they were working on reasonably thin profit margins.

One of the essential things wrong with OnePlus is their decision to move to higher-end phones and create a new range of OnePlus Nord phones targeted at the lower end.

This was the beginning of the downfall of OnePlus. Their diversification of product range is the central portion of what’s wrong with OnePlus.

More products mean they have less time to perfect any given product, indirectly resulting in reduced product quality.

As we discussed earlier, there are plenty of things wrong with OnePlus. Their diversification of the product line, leaving Carl Pei, adopting ColorOS, and removing some of the most loved OnePlus features have all contributed to OnePlus being close to its death.

Let’s understand the primary reasons why OnePlus is dying.

Things were more or less acceptable for OnePlus for a long time until OnePlus announced its official merger with Oppo. There were many things wrong with OnePlus, but their biggest blunder was the merger with Oppo.

As a result of this merger, Oxygen OS would be phased out, with OnePlus adopting a common codebase derived from Oppo’s ColorOS. It made business sense, but the idea of leaving Oxygen OS for a relatively slower and bloatware-filled ColorOS wasn’t excellent for customers.

Moreover, the transition wasn’t smooth either. OxygenOS 12, which had a lot of common codebases, didn’t really meet expectations, with lots of bugs and issues that spoiled the fantastic user experience of OnePlus users.

In the initial days of OnePlus, products were focused on the western markets and were launched there before expanding to other regions. As a result of changes on an organizational level, the phones now launch in China first and then move towards other countries.

This means that OnePlus is creating phones with China in mind. While the customer needs mainly are the same globally, this shows that OnePlus is now prioritizing China over Europe and America. This also meant that the products from OnePlus took a lot more time to become available in the EU and America after the launch.

Another paradigm shift that answers “Is OnePlus Dying” is their product diversification. Starting as a phone company, they have expanded to TVs, earphones, accessories, and more. Not only that, but OnePlus launched another lineup of their phones called the OnePlus Nord.

OnePlus moved its product line to compete with the true flagships, and the Nord lineup was supposed to cater to the lower end.

However, OnePlus hasn’t been successful either. At the proper flagship price, you expect exclusive flagship features. OnePlus provides performance and tools at par with flagships, but they could never really reach iPhone/Samsung level in terms of Cameras.

For a long time, Carl Pei was the face of OnePlus as a whole. Being one of the co-founders, he was influential and had his audience. Moreover, the western world associated OnePlus with Carl Pei.

Carl Pei left OnePlus to start his own company called “Nothing”. Carl Pei’s departure from OnePlus was the beginning of the question, “Is OnePlus Dying”.

Even after having the second founder, they seem lost and lack a vision of how they want to keep their existing customers happy while making great products to attract new customers.

Speaking of products, let’s look at the issue with their products.

What’s wrong with OnePlus? Well, ask any current customer of OnePlus, and they inform you about deteriorated build quality, delayed software updates, and unoptimized operating systems with plenty of issues that have made their lives a big mess.

Another that is wrong with OnePlus is its desperation to diversify. They plan to release a new smartwatch to compete with the likes of the Apple Watch. At a time when their existing products

Why OnePlus is Failing? Losing The Identity

OnePlus is failing because they were traditionally a mid-tier brand, but now they make expensive phones, which its core fans don’t like. Customers have observed a dip in the quality of new OnePlus phones. The relatively inferior software of the new OnePlus devices, along with their China-first approach, has contributed to the reasons why OnePlus is failing.

They were once associated with quality products, today, you will get decent products at best. They were the only ones making products like that for a long time.

Today, they create products with a wide range of similarities with other products. Many gaming phones from other companies have better performance than theirs. Standard flagships have a lot better cameras than them. Moreover, as far as charging speeds are concerned, many other companies do equal or even better fast charging than them.

OnePlus’s distinctive design and feature set are nowhere to find today. It won’t be an exaggeration to say that OnePlus is dead, and its USP is nowhere to be found and is one of the significant reasons why OnePlus is failing.

No, OnePlus is NOT dead in 2023. But, OnePlus is fast approaching its death due to the wrong target market, lack of quality smartphones, launching too many products quickly, and poor administration.

For a business to scale up successfully, all aspects of the business have to expand equally. Too fast growth in sales that can’t be handled by administration and support staff results in poor user experience.

OnePlus is on the verge of dying due to bad administrative, financial, and technological decisions. However, OnePlus can avoid its death by again creating midrange flagship killers with reliable software and support.

Now that you know the answers to “What’s wrong with OnePlus” and “Is OnePlus dying”. Clearly, they are in a big mess.

OnePlus is dying because of a lack of purpose, a merger with OPPO, the departure of Carl Pei, and poor product strategy. But they still have a lot of capital to turn around and regain their success. OnePlus must work on consolidating its existing products and improving them.

Otherwise, their death would be soon and very inevitable.