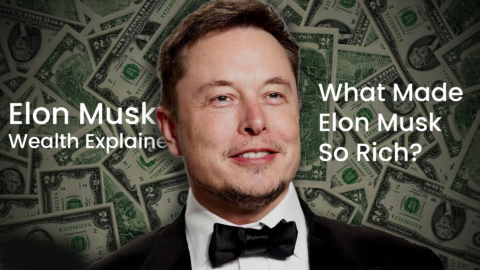 What Made Elon Musk So Rich? | Elon Musk Wealth Analysis

Elon Musk is one of the wealthiest and most influential men in the world. But he wasn’t rich a few years ago. This begs the question, what made Elon Musk so rich? We’ll answer that in this article.

We will be looking at Elon Musk’s early life, career, wealth inheritance, and more to help you understand Elon Musk’s money sources.

How Wealthy is Elon Musk?

Elon Musk is really wealthy. He is among the richest person in the world currently. His net worth is frequently seen moving around $200 Billion and $250 Billion. In case you don’t realize, that’s a 25 and then 13 zeros after that.

Elon Musk is one of the top 10 richest humans in the world and is frequently seen as #1 of the richest men. Elon Musk comprises majorly of his stake in various companies. He also has crypto investments and various other assets, but their contribution to his wealth is relatively tiny. Moreover, Elon Musk has confirmed the fact that he doesn’t own any real estate in his own name whatsoever.

What Made Elon Musk So Rich?

Elon Musk became so rich with the help of relentless hard work, optimism, proper leadership, and the ability to innovate. He becomes so rich by finding brilliant ideas, creating great products for those ideas, and then selling them to people in need.

He has been doing this since the days when he developed and sold a game as a kid.

Elon musk was made rich by selling his stake in his 2-startups Zip2 and X.com. He reinvested that money in Tesla, SpaceX, and Solar City where it grew exponentially and made Elon Musk super rich,

Timing, perseverance, and innovation fueled with a lot of passion made Elon Musk so rich that today Elon Musk is the richest person alive.

What are the Elon Musk Money Sources?

Elon Musk owns a variety of assets and properties that constitute his wealth. His income as the CEO of multiple companies is fairly minimal. However, in contrast, the value of his stake in different companies is giant.

He also founded other companies like Neuralink and OpenAI, in which Elon Musk owns a majority stake in them. These companies are also big Elon Musk money sources valued at about $1 billion each.

When Did Elon Musk Get Rich?

Elon Musk wasn’t always rich. He was born in a fairly middle-class family in Pretoria, South Africa. For the initial years of his life, he didn’t enjoy any extraordinary wealth.

Elon Musk got rich the first time when he sold one of his companies in a $180 Million deal. But even after that, his struggles continued as all his companies were on the verge of bankruptcy in 2008.

But after 2008, Elon Musk did get richer and richer with each passing year. It must be noted that one of his companies, Tesla kept struggling to profit until 2020.

Elon Musk did not have rich parents. His parents were fairly middle class. He grew up with his brother and sister. Things were smooth even after their parents had a divorce when Elon was 10. As he grew up and decided to go to Canada for an education he had to start managing his own bread.

Elon Musk’s rich parents could afford all the basic amenities and provisions that he needed as a kid. Yet, Elon Musk ran his own errands, including building his own game called “Blaster”, which he sold for $500.

He reached Canada with not much money. Elon Musk’s parents weren’t rich enough to fund his higher education in Canada. There he worked hard in various part-time jobs. By the time he left college, he had $100,000 in debt.

After this, Musk moved to the USA to study at the University of Pennsylvania. Thereafter, he started a startup called Zip2 with his brother Kimbal Musk, which was the foundation stone of his success as an entrepreneur/businessmen

Where Does Elon Musk’s Money Come From?

Elon Musk’s first significant jump in wealth was when he sold his first company Zip2 and become a millionaire. Thereafter Musk became a founding member of a company called X.com which later became PayPal.

Elon Musk’s money came from selling his stake in PayPal earned him just shy of $200 Million. He used this money to fund SpaceX, Tesla, and SolarCity. Today, a lot of Elon Musk’s money comes from Tesla and SpaceX. He uses this money in his new ventures, including OpenAI and Neuralink.

So, in short, Elon Musk was made rich by selling his stake in 2 of his wildly successful startups worth $180 Million and he reinvested that in Tesla, SpaceX, etc. to become worth more than $200 Billion.

So, what made Elon Musk so rich? Well, Elon Musk’s hard work, perseverance, and ability to properly captilize on his success made him the richest person on Earth.