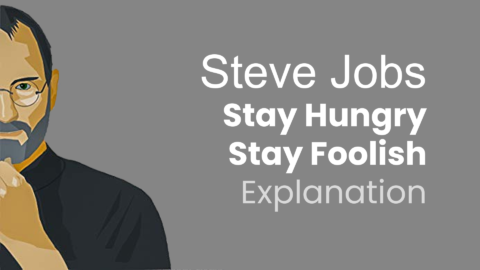 I will share the real meaning, origin, and other facts about the quote “Stay Hungry Stay Foolish” quote.

This quote from Steve Jobs was popularized during his Stanford Commencement speech in 2005. He narrated three stories about his life as life lessons to the students. During this speech, Steve Jobs said, “Stay Hungry, Stay Foolish.”

With the quote “Stay Hungry Stay Foolish,” Steve Jobs asks you always to keep the hunger for ideas, keep struggling, and don’t worry when you are called foolish. Indeed successful people are initially considered foolish by others, keep ignoring them.

What is the Stay Hungry Stay Foolish meaning? Stay Hungry means always being curious and looking for new ideas. Stay Foolish means ignoring your critics & demotivators. Overall this quote suggests that when you are always trying new things and hunting new ideas, you would be considered “foolish” or “insane” by many. To become successful, you have to ignore all such voices, and focus on your goals.

But what does he mean by saying “Stay Foolish”?

Stay Hungry Stay Foolish: If you have a hunger for knowledge, ideas, creativity, and innovation you will be called foolish by many. You must keep ignoring them because those with a real hunger are the ones who succeed in life.

Brand and his team had this publication called “Whole Earth Catalogue,” which was no less than the Google of those times. After a couple of years of issuing it, they knew its time had come. Hence they put out one final edition of the Whole Earth Catalog.

For the final edition of Whole Earth Catalogue, the back cover had an image of a deserted road, which you’d probably find when you are hitchhiking. At the top of the body was an image of the sun during Solar Eclipse, and in the middle was the quote, “Stay Hungry, Stay Foolish.”

Steve Jobs had read the final edition and was moved by this quote.

So this is the history of how Steve Jobs got this quote from the work of one of his acquaintances. He would keep this quote near and dear to his heart for many years.

Later, during his Stanford Commencement speech of 2005, he would mention the beautiful “Stay Hungry Stay Foolish” quote, and his words would be remembered for a long time in the future.

He did the due diligence to mention Stewart while making this quote. However, it’s still very popularly (and wrongly) remembered as a quote from Steve Jobs. Steve Jobs Stanford Commencement speech is considered one of the best motivational speeches of all time. Steve Jobs started the speech by joking, “that’s the closest I have ever gotten to a college graduation,” as he was a college dropout.

You can’t connect the dots looking forward. You have to look backwards to join them. Many unrelated things today will connect; in the future, you could look back and see the big picture forming. In hindsight, you will see how these unrelated things connected miraculously and landed you wherever you are today.

Steve Jobs had been immensely successful and had become a millionaire before 30. At the age of 28, he unveiled his finest creation, the original Macintosh. But then, he was fired from the company he started. After being confused and directionless for the next few months, he realized he was rejected, but he was still in love with what he was doing.

Steve Jobs emphasizes that if you live every day as if it was your last, someday you’ll most certainly be right. Realizing that we have only a finite amount of time left and we’ll be dead soon is the best way to make big decisions. The fact of the matter is that no one really wants to die.

Even those who dream about going to heaven don’t want to die. That’s why you must always follow your heart and passion because your time is limited, and everything else is secondary. That’s why every day of his Steve Jobs wished for himself to “Stay Hungry, Stay Foolish,”

He ended his speech wishing all the students of Stanford to “Stay Hungry, Stay Foolish.”

Steve Jobs was a visionary and a great motivator. Many of his quotes have given inspiration to a lot of people.

Steve Jobs’s “Stay Hungry Stay Foolish” is one of the most famous Steve Jobs quotes, yet most people don’t completely understand its meaning. Moreover, Steve Jobs actually took that quote from the last edition of the Whole Earth Catalogue.

The quote inspired Steve Jobs and probably played a critical role in his life. He saw this quote in the early 1970s and remembered it till his death in 2011. This is one of the simpler yet one of the most profound meaning quotes that you could ever find.