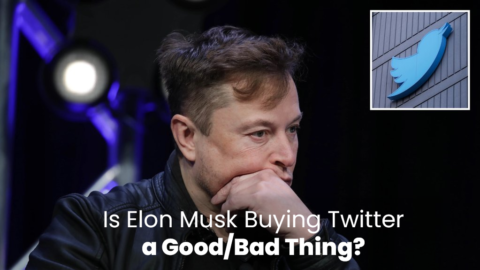 Is Elon Musk Buying Twitter a Good or Bad Thing?

Elon Musk has bought Twitter for $44 Billion. What does this mean for the world, Twitter itself, and its employees?

Privatization and having the entire power in the hands of Elon Musk alone is considered too dangerous by many. On the other hand, having a visionary innovator like Elon Musk could make Twitter the world’s best place for Free Speech.

So without wasting more time, let’s see if Elon Musk buying Twitter is a good or bad thing for Users, Employees, and the World. But wait, even before that let’s understand how did Elon Musk buy Twitter. If you already know the history, then skip ahead to Is Elon Musk Buying Twitter a Good/Bad Thing?

Elon Musk had always been critical of Twitter and had many reforms in his mind to make it a better place.

As a result, the Twitter board brought into effect a “Poison Pill Strategy” to prevent anyone from owning for than 14.9% of Twitter.

However, in the upcoming days, Twitter considered Elon Musk’s proposal, and on 25th April 2022, they decided to accept the offer.

Many people have had a lot of opinions about the impact of Elon Musk buying Twitter.

There are some obvious immediate impacts on Twitter. It’s likely that Twitter would introduce an Edit button, work to eliminate fake bots and take steps for Free Speech.

While most people support Edit Button and the elimination of Bots, the problem comes with Free Speech.

More specifically the form of Free Speech. Sometimes free speech could give rise to fake news, hate speech, and political issues. It’s no wonder that the ideal world of free speech isn’t the right direction.

Elon Musk has already clarified that Free Speech would be practiced within the bounds of the law of land. Balancing the national laws while maximizing free speech is a tough balance to achieve.

With Free Speech comes another hurdle — Content Targetting. In a world of Free Speech, you want everyone to get full chances to read and receive content.

Elon Musk has already promised that Twitter will be open-sourcing its algorithm to ensure prove its dedication to free speech.

No doubt, Elon Musk’s ideas are great. But, improper execution can be catastrophic for Twitter as well as the world in general.

Many people/organizations have been vocal about the impact of a single entity owning such an influential platform.

Their arguments are totally correct. That’s because Elon Musk owning Twitter alone makes it a dictatorship where Elon Musk could simply change his ideals 180 degrees to use Twitter as a weapon against his competitors with no one to stop him.

But, for a moment think of Facebook. When Instagram became popular, they bought Instagram, making them the owner of the 1st and the 2nd most popular social media. Thereafter, they acquired WhatsApp to become a monopoly in the Chat Messenger industry as well.

If those actions aren’t anti-competitive, then what’s wrong with this.

Twitter CEO Parag Agarwal seemed to have fairly good relationships with Musk. Parag himself is uncertain about the future.

Even though Elon Musk’s offer is accepted, the actual trade, completion of legalities, transfer of money, and transfer of assets can take many more months. That’s why currently Twitter will work as it has always been.

Will there be any mass layoffs on Twitter? No, Twitter still has about 4-6 months before being completely under Musk, which means there are no immediate Layoffs. Twitter is not highly profitable, but it isn’t loss-making either. There is no immediate need to conduct layoffs from a financial standpoint. That’s why layoffs are unlikely.

Elon Musk is an able leader, visionary, and dreamer. He already is running SpaceX, Tesla, Boring Company, OpenAI, Neuralink, and more. Elon Musk is already managing so many companies, he probably doesn’t have time to understand an already existing company from scratch.

Moreover, Parag Agarwal has been doing great work. Elon Musk and Parag Agarwal have talked publically as well, and have been vocal over many issues on Twitter. These include Edit Button, Spam Bots, and more. This gives a hint, that they both might gel in well enough for Elon Musk to trust Parag as the CEO. Of course, being the owner he can takeover quite easily if need be.

The consequences of this poll will be important. Please vote carefully. https://t.co/UDJIvznALB

So, what exactly will happen to Twitter employees after Elon Musk buys Twitter. There are no expected mass layoffs, there could definitely be reorganization and transfers to align Twitter with the new leadership. But, other than that, things are likely to remain the same.

Elon Musk buying Twitter could quite possibly become one of the best or worst things that could happen in the world of Social Media.

While successful, and capable of growing multi-billion-dollar companies, Elon Musk lacks experience in running a completely software-based company. Furthermore, he has almost no knowledge/understanding of the organizational setup of Twitter, making things difficult.

However, Elon Musk will inherit an excellent team of great executives to help him run Twitter. If Elon Musk’s ideas are executed properly, then Elon Musk buying Twitter could be one the best things to even happen to any Social Media company.

Hopefully, Twitter will grow enough to be able to compete with Facebook and Google in terms of market cap and revenue while still being the go-to for free speech.

If you still don’t trust Twitter, then a new platform Milyin might be the perfect place to have truly free speech.