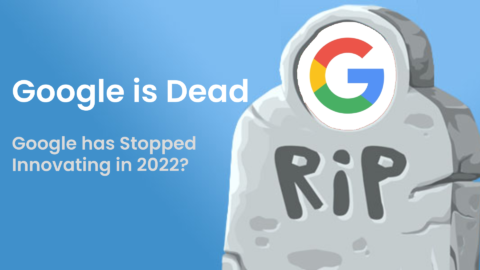 Google is Dead — Google has Stopped Innovating in 2023?

Google, a multi-billion dollar tech giant, has been on a mission to sort the world’s information with their search and various other products. However, let’s face reality; Google is dead. Okay, it’s still significant, has a lot of money, and is profitable, but the undercurrent isn’t promising.

Google’s primary source of income is ads in search and YouTube. With stricter privacy laws and more aware users, it’s getting harder for Google (and others) to harvest data. Google’s anti-competitive behavior can also land it in many legal troubles in the future. (We’ll discuss it later)

But, lately, Google has not built any revolutionary product in years. Does this signify that Google is dead in 2023? Keep reading to find out the answer.

Google could die due to some unprecedented paradigm shift brought about by a search engine, rendering the entire workflow of Google dead, or some movement against data collection for marketing by Google and Facebook. It could lead to Google becoming incapable of generating ad revenue.

The future is unpredictable. Anything is possible. Who knows if the reason for google dead would be something unimaginable.

Another reason Google is dead are services like Vanced YouTube, DuckDuckGo, and Brave browsers. These apps block ads and marketing from Google/YouTube (and others)

But, for this post, we talk about the primary reasons for Google’s success and significant challenges that exist today, which make me believe that Google is dead.

Even before that, let’s understand what made Google so successful.

How Did Google Become So Successful

Google is still a relatively new and young company. Among Google, Apple, Amazon, and Microsoft, Google is the most youthful company, less than 25 years old. Even though we talk about its death, it’s worth noting that the level of success achieved by Google in 25 years is still a fantastic achievement.

One of them is to nail the search algorithm. Google search was far more advanced, relevant, and accurate than its competitors for its day. But that’s not all. After all, once the competition caught up, Google maintained market dominance. How did they do that?

Well, the answer is -> Integration and revenue stream. These two factors distinguished Google from all other companies and helped them succeed. But, today, it’s possible that these two factors have become the reason why Google is dead.

Today, most of us use Google, even when competitors provide equally good search results. Some services like DuckDuckGo, are even better than Google in some ways.

But Google has the advantage of Gmail, YouTube, Android, and Chrome. Google is the default search engine on Chrome, and Google search comes built into Android. Google integrates all of its services within one another.

It ensures that if they acquire a customer for 1 product, soon the customer would be using all of the products. Any other company does not enjoy this advantage. Google’s such practices are being considered anti-competitive. We will discuss later how integration can be the answer to why Google is dead.

Secondly, Google nailed revenue. Google has made its services completely free. They didn’t charge a dime: no hidden charges or bills. In the day and age of heavily paid cable, newspaper, and other subscriptions, Google brought completely free services in the form of YouTube.

Their source of income was advertising. Customers had no problem, as they were already used to seeing ads on TV and in newspapers.

Giving customers better products at better pricing that integrated with their other services was the secret recipe to Google’s success.

Moving on, we must discuss how Google is dead today.

Google belongs to the elite group of companies to have reached $1 Trillion in evaluation. Google is massive. They are unparalleled in their markets. But today, all these companies face an existential crisis. Companies like Apple are dying as well.

Google has many great products today. The problem here is that Google seems directionless. Most of the new products/services from Google are barely successful. Take the Google Pixel, for example.

The Google Pixel 1 looked like a promising start for Google’s hardware division. But, they never got it to sell well. Furthermore, Google struggled to make good phones as well. It was visible in Pixel 4’s gimmicks such as RADAR and Infrared sensors.

Anti-Competitive behavior occurs when organizations intentionally create barriers for other companies to reduce competition. It’s done to create an unequal playing field to gain an advantage over the competition.

Google has used such anti-competitive behaviors in many places. It’s important to know that Google isn’t alone. Apple and Microsoft are under scrutiny as well.

We saw how Google used integrations to build its empire and maintain market share. The anti-competitive behavior restrictions will finish that magic for Google.

That’s why Google is dead today. Their products could easily fall apart, and customers would find it easier to shift to different companies if they finished the anti-competitive behavior.

That’s a big one. People today value their privacy far more than ever before. Companies like Google and Facebook use your personal information like location, age, interests, and many more to target particular ads to you.

The government, law enforcement, and the general public are increasingly putting pressure on the malpractices of these companies with anti-competitive laws, Right To Repair laws, and privacy laws.

The highly targeted ads by Google and many other companies distinguish them from conventional general-purpose ads. Consumer demands for more privacy. They want to have complete control over the data.

European Union has been taking many actions like the GDPR and more to protect user privacy. More and more laws to protect user data and privacy are coming up. This is creating trouble for Google. Such laws are inevitable so that Google will be dead in 2023.

Google is seeing solid challenges from other competitors as well. Google, which once enjoyed the luxury of unmatched technological supremacy, faces harsh competition.

Google Chrome is being challenged by brave browsers, which are built through Google Chrome but have features to protect user privacy and have a built-in AdBlocker.

YouTube is already seeing harsh competition from TikTok and Twitch. Gamers are turning towards Twitch more than ever before, and Google’s TikTok rival called “YouTube Shorts” is still far behind TikTok.

Furthermore, Google search is being challenged by companies like DuckDuckGo that bring privacy-focused and high-quality accurate search results.

Has Google Stopped Innovating in 2023 – The Google Graveyard

Google, even after having successful products, has faced many shameful failures. One such failure is Social Media and Instant Messaging.

Google has tried to enter the Social Media market many times with various services. But most of these services are dead today. They couldn’t crack the code for it.

Similarly, Google created Google Hangouts and then Google Allo to compete with WhatsApp and Hike, but it was also a failure. I personally used to love Google Allo. It was an amazing app and had many features far better than WhatsApp at that time. But that too died.

Google has killed so many products that you can find an open-source list of all the products killed by Google, and it’s massive. It’s called the Google Graveyard.

This shows that regardless of Google being very successful, they may still fail in creating the next big product for the market.

This is a sign of worry because once the existential crisis of Google is dead and actually starts, they will have a hard time building a new product that is successful.

Even when many signs suggest that Google is dead from the inside, there are still some silver linings.

Even though it’s had little success, they hopefully have enough time to establish themselves as a hardware + software brand before it’s too late.

The Google Assistant-powered Google Home is slowly creeping into the market as well. These products could be the foundation for the next 25 years of Google’s success.

Google Pixel hardware with the Pixel 6 has finally started looking good products for the general public. Furthermore, Google’s earbuds and many other accessories are also gaining momentum.

With Google Stadia, they are trying to enter the Game Streaming market. Even though Google Stadia is nowhere close to being good enough for the general public, it’s still one of the best.

Google Stadia can finally mark the entry of Google into the entire gaming industry. This will open doors for an untapped and underutilized market for Game Streaming.

Google is dead. It is. This is due to the law, competition, and public sentiment against Google.

But, Google is smart. Google knows it better than us that Google is dead from the inside. They must be developing many products and ideas internally that might take the entire internet by storm.

Things that were once their strengths are becoming their weaknesses today. Even after being highly profitable and successful, you can find Google dead from the inside.

They took strict action against Vanced YouTube, causing it to shut down as well to keep their advertising business going.

They are trying their best to keep themselves alive. It won’t be easy. We wish them all the very best.