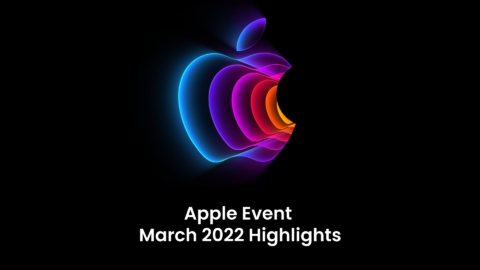 Apple Event 2022 was a complete banger. Many expected launches, but some big surprises as well.

After months of speculation, Apple finally made a big announcement. And we have got the new releases. We have tried to summarize and present the Apple Event March 2022 Highlights for you.

The invites for the event were sent last Wednesday, which was unexpected since Apple generally sends invites on Tuesdays.

Apple quickly jumps to the major announcements. Starting with…

Apple started by announcing new colors for the iPhone 13s. The mid-year launch was themed around the color green.

Next up iPhone SE

Apple Event 2022 March saw the update to the iPhone SE. It’s the same design as the previous iPhone SE.

It’s upgraded with Apple’s A15 chip. This gives it more processing power, which fuels better computational photography and camera features.

It’s got tougher glass, 5G, better battery life, and more. Apple brags about how they refreshed the internal design of the iPhone SE.

Now the important question, price. It starts at $429. Preorders start Friday, and are available on March 18th, 2022.

Apple quickly shifts the focus from iPhone to iPad.

iPad introduction starts with talking about Apple Silicon, and how the design of iPad is popular.

There comes the next big announcement.

The Apple Event 2022 March iPad Air announcement started with Apple bringing the M1 chip to the iPad Air. It’s surprising since the iPad Pro already had the M1 chip.

Apple shows how the iPad Air is at least twice as powerful as similarly priced Windows laptops.

Apple also brings a wide-angle camera to the iPad. But wait, there’s more. Apple is also bringing Center Stage. Center Stage is super popular feature in iPads, and that’s why the iPad Air has got it.

The highly speculated yet unexpected announcement. There was not much known about this announcement in Apple Event March 2-22.

Yes, you guessed it.

M1 Ultra is, according to Apple, the last addition to M1.

Apple doubles almost every single specification on M1 Ultra. That’s why it supports up to 128GB of Unified Memory.

Apple came back with its meaningless graphs in presentations. They are never going to learn. But nevertheless, let’s enjoy M1 Ultra.

Mac Studio was one of the products that were leaked very recently, and not much was known about it. In fact, many expected it to not be happening at all.

The name, too, was unexpected. The studio isn’t a naming scheme Apple has used for Macs. Clearly, Mac Studio was the biggest and most unexpected highlight of the Apple Event March 2022.

It comes with multiple M1 chips to choose from. The M1 Ultra Mac Studio is more than 3.8x faster than the fastest 27-inch iMac. There are many more stats presented in Apple Event March 2022 highlights. But, we won’t trouble you by showing Apple’s marketing tasks.

Mac Studio graphic faster than the fastest Mac Pros and iMacs. M1 Max offers up to 64GB of unified memory that can be used for Graphics.

This time Apple has built the stand into the display, after the $1000 stand for Apple Pro Display XDR.

The Studio Display comes with a 12-megapixel ultrawide camera, 3 mic arrays, and more.

It’s a 27-inch display that brings a 5k retina display, with excellent connectivity. It can be connected with multiple Studio displays. It can deliver up to 96W of power capable of fast charging a MacBook Pro 14′.

There is not much talked about the display quality and features.

So, the Apple Event March 2022 has concluded. One of the best events in recent times.

A lot of speculation had been made about what would #Apple release. Some of them were true. Others weren’t. From iPhone SE to Mac Studio, to iMac Pro, to iPad Air, and more. There were a lot of things expected from the Apple Event March 2022.

We tried to list all of them and be the only place you need to know about Apple Event March 2022 Highlights.

Did we miss anything? Let us know in the comment section below.