MH370. A massive aircraft vanished, and we haven’t found it in so many years. But finally, it looks like we will find it.

MH370 rescue was a 3-year long search operation covering 120,000 km² of the ocean bed. But, it ended with no success. No debris or bodies of the deceased were recovered.

It’s been many years since then, but the latest MH370 update 2022 looks promising. We might be finally close to uncovering what happened with MH370.

Research shows that the search area was incorrect. In reality, the MH370 was crashed 2,000Km west of Perth. Also,  do you know 2 senior air crash investigators have claimed MH370 to be a “murder-suicide plot”

Another MH370 Update 2022 shows that research uses modern technology to find aircraft. According to it, the aircraft must have been in a holding pattern for 22 minutes. This could reduce the distance plane could travel. As a result, the actual crash site could be further up north than the current search area.

What Happened With MH370

MH370 is one of the largest modern-day mysteries. It’s hard to believe that a Boeing 777-200ER disappeared and we haven’t found it in so many years.

There’s a lot of new information to figure out what happened to MH370. But for now, let’s get the basic and known facts right. Then we shall discuss the MH370 Update 2022.

What We Already Know About MH370 MH370 was a regularly scheduled flight from Kuala Lumpur to Bejing. The aircraft was a Boeing 777-200ER. It vanished with 239 souls on board.

The flight MH370 from Kuala Lumpur to Beijing, took off as scheduled, it was the last flight for First Officer Fariq Hamid, after which he was going to be certified First Officer, his trainer was a 53-year-old, Captain Zaharie Ahmad Shah, one of the most experienced Pilots that the airline had.

The takeoff and climb were mostly uneventful. The first 40 minutes were as perfect as they could be. But then things changed quickly. As the plane headed EAST and passed the Malaysian Jurisdiction, the Kuala Lumpur ATC contacted MH370 and said,

After this moment MH370 vanished from Malaysian radar and never contacted Vietnam either. Somehow the transponder, which is used to transmit the aircraft’s location turned off, and the plane changed its course.

Ho Chi Minh took 18 minutes to realize that a plane was missing and to call Kuala Lumpur to talk about it.

By that time, the plane took an aggressively left turn towards Malaysia, now pointing WEST. Later, it crossed entire Malaysian territory and reached the Indian Ocean, where it again made a turn to point SOUTH. 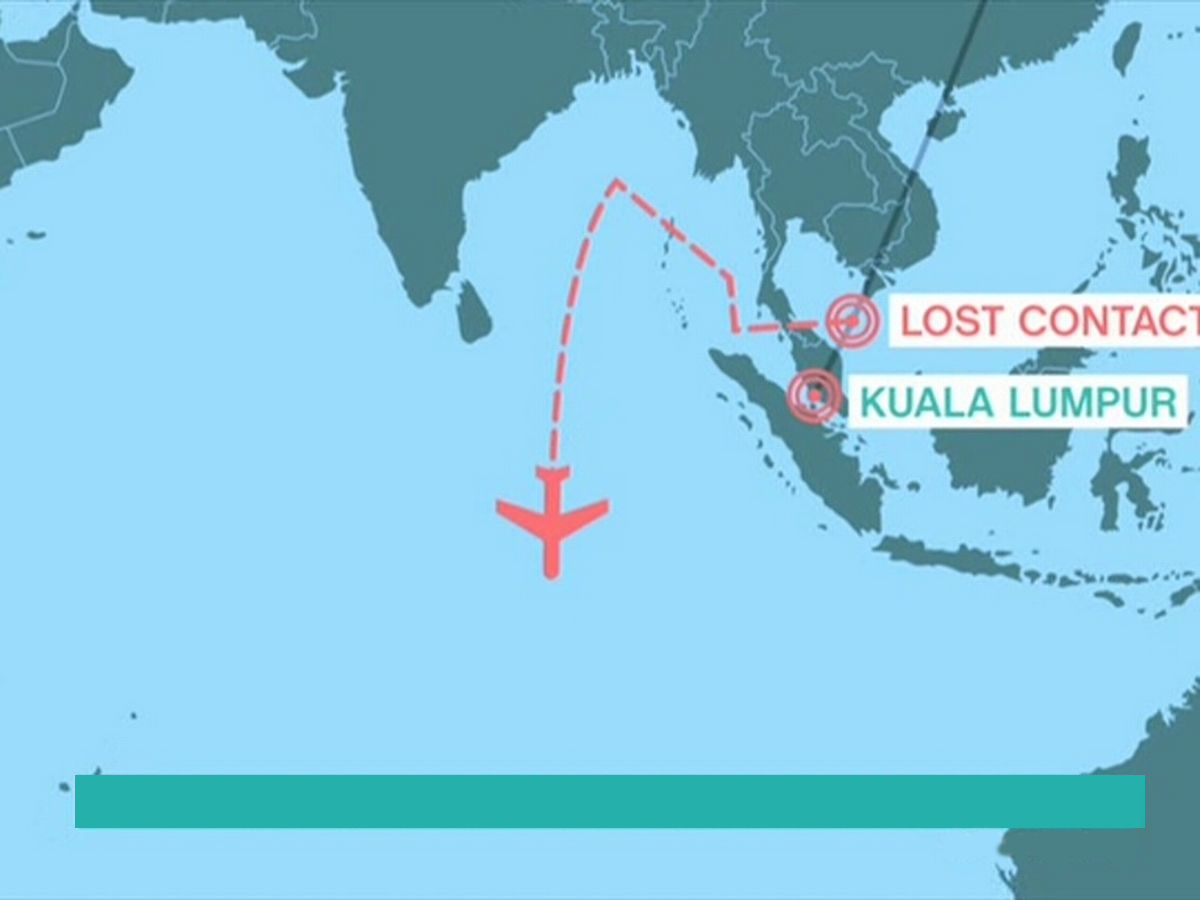 Not much is known about the aircraft after that.

There are 2 abnormalities in this story. First and foremost a procedure for radio communication was broken by the pilots. After being asked to contact Ho Chi Minh, the MH370 replied, “Good Night, MH370”. This was wrong. Pilots must repeat the instructions provided to them. In this case, the right reply should have been, “Contact Ho Chi Minh 120.9, Good Night Malaysia 370”

Secondly, after losing the radio communication, the plane took a left turn. According to calculations, for this turn to be possible, the plane would have to bank at an angle greater than the safe angle. These unsafe maneuvers are not done in normal conditions.

Improper communication and unsafe maneuvers may point towards Pilots being under some pressure, some technical issues, etc.

Now that we are done with the basics, let’s see some popular and possible theories of what happened with MH370.

The secret to What happened to MH370 lies somewhere deep inside the Indian Ocean. We are no closer to locating the debris than ever before thanks to the latest MH370 Update 2022.

Two air crash investigators made the claims, of a “murder-suicide plot” in a documentary “MH370: The Final Search”. John Cox, a renowned aviation safety investigator, and retired pilot claimed, “The loss of MH370 was no accident”

This should mean the plane performed a controlled ditching or glided into until crashing in waters.

There have been numerous claims about it being suicide by Captain Zaharie Shah.  A couple of activities performed by the airplane required a high level of skills. These skills are likely to be only possessed by Captain Shah.

If it is true, we can clearly explain what happened with MH370. This included the totally unexpected and unexplainable disabling of the aircraft’s datalink system.

For six hours after the jet vanished from secondary radar, MH370 maintained intermittent contact with a geostationary Indian Ocean satellite operated by Inmarsat, a commercial vendor based in London.

This indicated that the plane had not had a catastrophic accident. It is thought to have continued in high-speed, high-altitude cruise flights for the whole six hours.

The time gap between sending and received signals was used to estimate distances, and an arc was made in waters near Australia. This was the primary search area for the majority of search missions to date.

MH370 update 2022 include the works of a British aeronautical engineer, Richard Godfrey. He had presented the most recent and important theory about what happened with MH370.

His calculations suggest crash site to be 2,000km west of Perth, Western Australia in the Indian Ocean.

“No one had the idea before to combine Inmarsat satellite data, with Boeing performance data, with Oceanographic floating debris drift data, with WSPR net data,” he said.

He did complex calculations to use data from multiple sources and came on a collective result, about which he is fairly confident.

Holding pattern is when an aircraft moves in a virtual closed loop. It’s a common practice to use to maintain geographical position without landing. It’s also used to manage traffic congestion in busy airports.

But these practices are non-existent in cruise phase of flights. A new research shows that MH370 could have been in a Holding pattern for 22 minutes. Which would have burned a lot of fuel but kept it in roughly the same geographical position, thus reducing range. What Happened With Mh370 The Secret 22 Minute Holding Pattern

Former Qantas captain, Mike Glynn used Weak Signal Propagation Report (WSPR). These signals are commonly used for general purpose, including calls. According to Glynn this can be used as a “Trip-Wire”

Whenever aircraft flies through such signal, it can be tracked. His analysis shows that the MH370 conducted a 22 minute long holding pattern. There’s no logical reason to conduct a holding pattern 2hrs+ into the flight.

If this is to be believed, then the MH370 crashed long before the area where search missions were conducted.

Now that we know the possibilities to where MH370 is, we must know What Happened withMH370.

There are lot of possibilities to explain what happened with MH370. Some extremely unrealistic, like alien attack. Other vague possibilities were like the plane landing on some island, refueling and taking off again.

But there were some very real possibilities too. Let’see based on our MH370 Update 2022, what happened with MH370.

Experts believe it to not be a possibility.

The basic intent for most of the hijack is to either crash a plane, put some demands to a particular government, and take part in terrorism by trying to have mass casualties.

In case it was a hijack, there were no demands made by the hijacker.

Malaysian Airlines Flight 370 was in the air and comfortably cruising for many hours after the contact loss. So, it was sufficient time for Hijacker to put forth the demands.

In case it was an act of terrorism, the goal is to either cause mass casualties or destroy the properties of a nation (like the twin towers).

They crashed deep in the sea, so there’s almost no national resource destroyed and they were far from proximity from any nation.

In case they would try to do mass casualties it would be wiser to crash it on land so that the crash could have caused casualties of people on the ground.

Also, most terrorist organizations are quick to claim the responsibility for any act of terrorism.

The airplane crashed 7 years ago, and no claim from any of the organizations is another point that ensures that terrorism/hijacking is not a possible outcome in the mystery of MH 370.

Did Captain Shah Suicide on MH370?

The latest Update about MH 370 includes the fact that there are chances that the plane was hijacked and crashed by the crew themselves.

A close friend of Captain Shah claims that he was seeing other women while still being in a marriage. Some sources claim that the wife of Captain Shah along with Kids had moved out of the city a day before the MH370 disappeared. 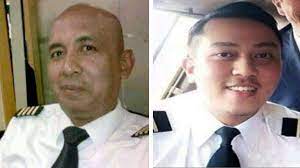 Is it possible that it was a pre-planned crash by Captain Shah?

Yes, a fellow pilot also claims that captain Shah was “terribly upset” with his marriage.

Could this have caused him to take his life?

He had no professional plans or social plans after the 8th of March.

But new sources in MH 370 Update 2022 claim that he had booked a dentist appointment that was supposed to happen after the 8th of March.

There are some unconfirmed reports that claim that the co-pilot might have tried to do a phone call. The report claims that the co-pilots phone briefly connected to a cell phone tower, which may indicate a attempt to call being made, it is unknown that whether a call was made, or it was just a brief connection between tower when the phone was switched on.

Pilots like passengers, aren’t allowed to use phones mid air, and must keep them switched off. Malaysia’s transport ministry said that, “A ‘reattachment’ does not necessarily mean that a call was made. It can also be the result of the phone being switched on again.”

Did MH370 crash due to the wrong intentions of pilots?

One of the strong points about this is that the pilots didn’t communicate in the right way to the Kuala Lumpur ATC while doing the good night handshake, which might show that the pilots were making mistakes.

Even after the advancements in aviation technology, and safety procedures pilot mistakes bring down planes. MH 370 Update 2021 can be very well linked to have a possible storyline Helios Flight 522

In Helios 522, a mistake of pilots caused the cabin to get depressurized, and when aircraft warned them, they interpreted it to be a Takeoff Configuration warning.

As they were already airborne they ignored it thinking it was something misleading. It later resulted in Pilots getting incapacitated and the plane crashing after fuel starvation

Could something similar have happened with MH 370?

Yes, some error may have caused MH370 to turn back, but the pilots were incapacitated before being able to reach Malaysia and the plane kept cruising on Autopilot and ditched after fuel starvation.

But Helios 522’s pressurization issue began with a careless maintenance engineer, and then negligence of pilots.

The Pilots of 370 had a great and almost clean flight record and showed they were good at following procedures.

MH370. It’s to this day, one of the biggest mysteries of aviation.

Someday, the mystery will solve. All that matters is how soon the day will come. Newer MH370 Update 2022 are promising. Latest theories about it’s location are the most important factor in solving the mystery.

It’s hard to imagine that a giant Boeing 777-200ER is lying underwater mostly intact and retaining it’s shape, yet we can’t find it.

Nevertheless, we still wish peace to those who were onboard MH370. Families of deceased have our complete sympathy. We hope someday we will definitely understand what happened with MH370, and that day, hopefully will come soon.