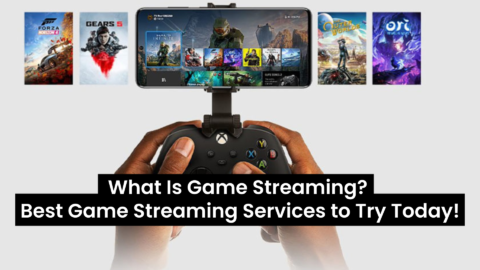 Admit it. We all have felt bad when our new and expensive gaming PC starts feeling like a thing of the past, because a new CPU, GPU came out.

Now you have to buy a new CPU to improve your gaming experience, only to have your CPU become old again in a few months. The problem that most gamers face is that their PCs get outdated and it costs a lot to upgrade rigs. Only the most dedicated players upgrade their console or PC more than once every four or five years.

Well, your wishes can now become a reality. Yes, all your problems have a real solution, and it’s actually really good. Game Streaming.

A TV. A streaming stick. A Mobile Phone. A Potato PC. Game streaming allows you to play games with high-quality graphics on any device at any place at any time. Your phone with Game Streaming could be more powerful than your $10k Gaming PC.

If you can’t afford to upgrade your rig frequently or you like to game while traveling or aren’t into tech but still love games, game streaming is for you. It’s cheap, you can play on any screen, and you don’t have to be a tech guy. See, it’s that simple.

What is Game Streaming? What are its Benefits?

Now that you know that Game Streaming is the one-stop solution to your problems, let’s learn more about it.

Game streaming is a service where games can be played on any device, but you don’t have to download the game. That’s because, through multiple connected devices, including phones, laptops, and TVs, you play the game in real-time, but it’s run on a remote server somewhere else in the world.

The video of the gameplay is transmitted to your device over the internet. It’s as if you are screen mirroring a game from a game streaming service to your phone. So you can play games on any screen.

Now that you know how game streaming works, I will answer your question. So cloud gaming solves a lot of problems. For example, you can play games while traveling. Imagine playing God of War or Halo on your mobile phone while traveling – wouldn’t it be cool!!!

If you are a gamer chances are you own a good setup, but the problem is all of it becomes outdated in 4-5 years. New consoles are released and old ones are decommissioned. New graphic cards are released, and suddenly your high-performing gaming PC becomes a potato PC. See, it is evolving, but backward.

Say goodbye to buying expensive parts or upgrading consoles. Most of the game streaming services are far also cheaper than upgrading your PC or buying new consoles.

As I said, the concept of cloud gaming is brilliant and it solves a lot of problems. But as you already know, ‌reality is often disappointing.

It takes a fraction of a second for an image to arrive on your home screen from a data center and a fraction more for a button press to get back to the data center from your home.

Those fractions do not have to be very high for a moderately fast-paced game to become unplayable, and not much higher than that for almost any game to become unpleasantly sluggish. Some of that delay is because of the internet, the quality of the router.

Even the make of your TV has an effect. But mostly it’s raw physics. A gamer in Houston, Texas, playing on a data center in Seattle, Washington, for instance, is a little over 3,000km away.

Let’s take Google stadia for an example: we played Doom eternal on stadia feels exactly like playing it on consoles, which is impressively boring. Setup wasn’t pushing stadia quite to its limits. The screens were 1080p instead of 4K, and the sound was stereo through headphones, not the promised 5.1 surround sound that will arrive with the full subscription version.

You need to know that Microsoft also showed a demo, but the only difference was that they played on mobile. Yes, you read that correctly. Microsoft played Halo 5 and Resident Evil 7 on mobile, see, I told you you can play games on any screen. In fact, the phone was connected to the internet wirelessly, rather than through a cable, which reflects how these devices will be used in real homes.

Even if the data traveled at the speed of light there and back with no other delays, there would be a delay of more than 1/60th of a second – and one frame can be the difference between a win and a loss in a fighting game.

Let’s take YouTube and Netflix as an example. No matter how easy it looks, streaming high-quality video is tricky as hell. They use a lot of compression to find the perfect balance between quality and size. That’s the major problem.

Best gamers want at least 120fps of 4k beauty. Most of the game streaming services are capable of processing these games. But the problem is Internet. Most people don’t have access to fast internet capable of 4k 120ps.

We gamers hate lag more than anything in this world. But, frame rate and resolution are equally crucial.

Remember when Video Streaming services like Netflix started. We thought, buy one service and enjoy all the movies/shows. But the reality is now that we need to buy half a dozen streaming services.

Some companies own exclusive licenses for movies/shows. As a result, we have to own multiple streaming services to enjoy everything we want.

The same could be the fate of Game Streaming. It’s possible that Game Streaming services will start getting exclusive licensing for games.

This will make us have to spend more to ensure we have all the services to play all the games. However, it would still be far cheaper than having to upgrade the PC and buy the game too.

Still, there are a lot of questions yet to be answered that will affect these companies’ chances of success. For Google, their gameplay wasn’t as flawless as it showed in the Youtube space demonstration.

The company is also pricing stadia as a console, with an upfront fee for the controller, a flat price per game, an optional monthly subscription for added features (such as 4K), and access to a rotating catalog of free games. Microsoft did what I call a “PRO MOVE”, they didn’t promise anything.

Anyways, let’s talk more about stadia. Stadia has a lot of problems. For starters, you need to meet these three criteria: While you may have a low-latency connection that’s consistent, maybe it’s not fast enough to use game streaming services. Maybe it is fast enough, but you live too far away from your nearest data center.

Another problem is an internet connection. Some people might buy stadia because their internet is slow and they can’t download games. if you are one of them then your internet won’t be able to handle streaming games on stadia as well.

Google Stadia is the most limited video game streaming service. You can play free games every month with the $9.99 Stadia Pro membership, but otherwise must buy your games individually through Stadia. These titles remain on Stadia, and cannot be downloaded or incorporated into any other digital game library.

More than 100 games are currently available on Stadia, but it’s still an extremely limited list.

Xbox Game Pass Ultimate isn’t a streaming service on its own, but it covers all the bases, whether you are Xbox or PC gamer. For $14.99 per month, it includes a selection of more than 100 games for both Xbox and Windows 10, rotating regularly and including appealing choices.

It also features cloud gaming as part of the membership, accessible on Android devices.

In this case, game streaming is a bonus feature that’s still in beta, but we’ve been impressed by how well it works so far.

Shadow was originally one of our top picks, given its $12-per-month subscription offered full access to a remote Windows 10 PC (with higher tiers adding power features like ray tracing). Though the company changed ownership and the subscription price increased to $30 per month, with no ray tracing option.

Shadow still lets you play your games in a lag-free fashion, but the service is closed to new subscribers until later in the year. Yeah, sorry for being the bearer of bad news.

Amazon Luna is another early access service, but it impressed us in tests. It offers multiple, channel-based choices for game streaming, starting with a compelling (if uneven) games selection on the $5.99-per-month Amazon’s Luna+ channel and $14.99-per-month Ubisoft channel.

We strongly recommend getting the $49.99 Amazon Luna Controller, as it uses its Wi-Fi connection to improve performance (the controller also makes it easy to switch between Luna-compatible devices).

PlayStation Now’s $9.99-per-month membership ($4.99 monthly, with an annual subscription) doesn’t let you buy games but provides access to a library in the hundreds. The streaming catalog spans the entire PlayStation family’s lifetime. It’s hardly a complete library, but it’s a huge list with numerous gems.

Think of it as Netflix for PlayStation games.

There is some rumor surrounding PS7 and Game Streaming services. It is rumored that maybe the PS7 will be a game streaming service. It means that you don’t have to buy CDs and you can just stream games.  We don’t know whether these rumors are true or not, but Sony does want to change things for the better, and I think it’s a  good idea. If you want to know more about the PS7 and its price predictions and possible features, then read this post: PS7 release date and features

Game streaming is a great idea and it has a lot of potential. It’s cost-effective, reduces e-waste, improves game performance, doesn’t require installations, and is easier to use if you are a novice.

Clearly it has a lot of potential, and in the future we might see the landscape of gaming shift to being Game Streaming exclusive.

There are a lot of problems still to be solved. This includes improving latency and ensuring faster internet services.

Of course, it has some flaws like lag and issues with internet connectivity, but still in its initial stages and I think it’s here to stay.