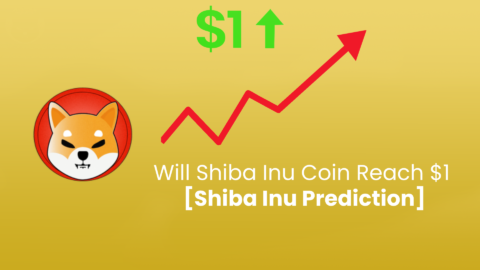 The Dogecoin Killer Shiba Inu, has become one of the largest Cryptocurrencies in the world. Many people jump to buy the Shiba Inu. Here are our Shiba Inu Predictions.

We will give you lots of valuable advice about Can Shiba Inu reach 1 cent, and further people wonder Will Shiba Inu Coin reach $1 in 2022?

Earlier in 2021 Shiba Inu or SHIB as people like to call it, got listed on many popular crypto exchanges and sites. This propelled its growth to the point where it is now one of the fastest-growing coins in the market and is in the Top 10 biggest cryptos by Market Value.

One of the biggest milestones for crypto like Shiba Inu and Dogecoin is to reach $1, to be as valuable as normal currency and thus making it capable of replacing normal currency.

So will Shiba Inu coin reach $1? Well, we will answer it in a bit, after clearing the basics.

First of all, the most obvious question is, will Shiba Inu be profitable? And should you Invest in Shiba Inu?

The answer is Yes, Shiba Inu is unstoppable and will keep growing. You should probably invest in Shiba Inu right now. As it gains Momentum and popularity, it will grow.

Currently, it is on many popular crypto exchanges, but it is not on Robin Hood, and it’s not still in the early stages in Asia and many other countries.

So Shiba Inu Predictions show it has a lot of potentials, therefore if done wisely Shiba Inu can be profitable.

This goes without saying, that Crypto and everything related to finance are risky. Everything talked about here, is not financial advice, of course, I have tried to research and make the best predictions, but none of it is a guarantee of the future. I or this site isn’t responsible for any financial decisions you make after reading this.

Should you Invest in Shiba Inu Coin in 2022?

You might wonder why so many people are interested in Shiba Inu Coin when its price is not even 1 cent.

Well, the answer is supplied, they have 1 Quadrillion coins in total. Multiple this tiny price with 1 Quadrillion and you reach a figure bigger than many MNC’s market cap.

Shiba Inu as I said isn’t at its full potential.

That’s what any more people jumping into Shiba Inu think. There are a lot of people who believe that the Shiba Inu coin can reach $1

Shiba Inu started to kill Dogecoin, it is pretty successful in it, as its market cap is now higher than Dogecoin. Yet it’s still less known and doesn’t have Elon Musk in its favor.

Shiba Inu has Vitalik Buterin who is the co-founder of Ethereum also involved in Shiba Inu coin. This gave Shiba Inu huge exposure due to his huge following.

Shiba Inu’s mantra for success is its easy accessibility, as the low price allows anyone to buy it, and community support.

So you should Shiba Inu.

Shiba Inu isn’t dependant on any external driving force and is self-dependant, the community is the driving force.

Shiba Inu can be profitable. I am personally invested in Shiba Inu, and consider it can further grow by another 50x-100x easily.

Anything beyond that has its problems.

That’s the big and the most common question people ask.

Currently crypto is a multi-trillion dollar market, but think for a minute, there are 1 Quadrillion Shiba Inu in existence.

Shiba Inu has a lot of growth potential.

The slightest increase in demands can fuel major growth when the cost of a coin is very low.

However reaching $1, which would be well over 10000x growth over the current price is impossible.

The Ethereum Effect: One of the biggest hurdles in Will Shiba Inu coin reaching $1 is Shiba Inu value itself.

Shiba Inu is an Altcoin based on the Ethereum Blockchain.

Most of you don’t need to understand how it works, just know that Ethereum is a ledger where Cryptocurrencies are like Ethereum itself.

I consider the Crypto industry much like the situation of Space Exploration today.

Multiple companies are thriving to make private space tourism real, but the market isn’t big enough to accommodate more than 1 large-scale space tourism company, as a result, it difficult for all of them to survive.

Same way, multiple crypto coins are trying to grow, but the market isn’t big enough to accommodate more than 1 large large-scale at the same time, which makes growth in Shiba Inu value difficult.

For Shiba Inu to exist Ethereum Blockchain should keep working, which somewhat guaranteed that Ethereum keeps growing too. The industry isn’t big enough to support Ethereum and Shiba Inu at the time, making it difficult for both to have unparalleled dominance.

We have now discussed and given you a detailed explanation about “Will Shiba Inu coin reach $1?”, now let’s lower our goals and discuss Can Shiba Inu reach 1 cent.

If the price of 1 Shiba Inu reaches $0.01 or 1 cents, the market cap of Shiba Inu Coin would be in the ballpark of $10 Trillion, roughly at least 5 times bigger than any company that currently exists.

It’s ambitious, yet possible. No one ever thought Bitcoin would one day have a market cap of $1 Trillion.

One of the bigger arguments favoring “Can Shiba Inu reach 1 cent” is Bitcoin. Once people weren’t sure if Bitcoin will hit $1, and today it trades often above $50,000.

Of course, if the dollar weakens, and the entire crypto industry grows massively in scale with time, it is possible, however, it’s still ambitious.

But I am pretty confident that it can reach 0.1 cents and quite surely 0.01 cents.

This is because the entire crypto industry is a multi-trillion dollar market.

There are a lot of reforms needed to have Shiba Inu reach 1 cent in value.

Currently, it has more than 130 Billion Coins in circulation.

So Dogecoin can reach $1 at a far lesser market cap than Shiba Inu.

Since Shiba Inu coin is considered Dogecoin Killer, it’s Apt to compare it and hope it performs better than Dogecoin.

So let’s get back to the big question of Can Shiba Inu reach 1 cent?

What #ShibaInu did in October 2021, by achieving a Market cap of more than 50 Billion.

I hope the bull run continues and it can easily give a 10x or 100x return.

Shiba Inu the meme about the #Dogecoin meme is no real, and it is no more a joke. It’s a serious financial entity.

Our Shiba Inu Predictions suggest that Shiba Inu can reach something crazy like a 100x growth in the next few years.

Shiba Inu Predictions suggest that it will grow a lot more. Shiba Inu value is capable of improving by 100x easily.

If we target a relatively smaller, yet still massive goal of 1 cent, then also it’s extremely profitable. Can Shiba Inu reach 1 cent? Yes, it’s possible, but still, it would not be happening anytime soon.

For Shiba Inu’s value to reach 1 cent, it would have to grow by 10000x, which is big and will not be a cakewalk

So, can Shiba Inu reach 1 cent, Yes but it would take many years.

Even without it, various Shiba Inu Predictions show it is still capable of growing for a long time.

Shiba Inu’s value can easily have 10x/100x growth over the years and is still a quite good investment.