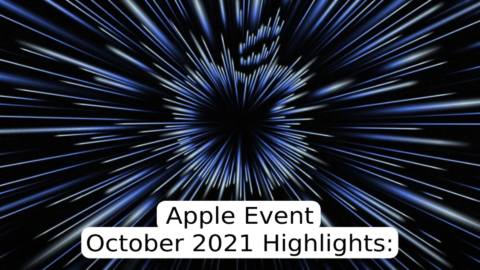 Apple Event October 2021 was a banger, here are the highlights and main announcements at the Apple Event 2021.

After months of speculation, Apple finally made a big announcement.

It was a brilliant event, and a rare event as it happened on Monday, usually Apple Events happen on Tuesday.

Tim Cook starts the event by highlighting the key areas of today’s event; Music and Mac

First up in the Apple Event October 2021 Highlights is Apple Music.

We will talk about the Apple Silicon and MacBooks in a second.

Apple Music and Siri work even better, you can now ask Siri to play a playlist for a particular mood.

You can ask Siri to Play Music Playlist for Hiking, or whatever.

Apple announced Apple Voice Plan starting at $4.99 that allows you to use Siri to utilize the full potential of Siri.

Apple updated HomePod Mini with 4 new colors, including my favorite Orange and Yellow.

HomePod Mini has been the most successful speaker from Apple.

Apple is doing its best to make HomePod better and aligning it with its color scheme for other Apple devices such as iMac, which last year got a similar color update.

Coming into AirPods. AirPods are another major update from the Apple Event October 2021 Highlights

Tim Cook bragged about AirPods being the most popular earphones of all time.

And then announced the first major update to #AirPods since their release.

Now the new baseline AirPods support spatial audio and have a shorter stem.

The shape of the charging case has also been changed accordingly.

Apple Event October 2021 Highlights would be incomplete without talking about Apple Silicon.

Apple set the theme by talking about MacBooks.

The new Chip was rumored to be called M1X or M2

However, Apple surprised everyone by calling it “Apple M1 Pro”

M1 Pro has 10 cores with 8 Performance cores and 2 Efficiency cores.

As expected it has up to 32GB of unified storage.

It has about 200GB/s of Bandwidth.

Performs significantly better than M1 and has even better efficiency.

What else could you expect from #AppleSilicon

Apple got me jumping from my chair.

When they announced another chip.

The M1 Max has 32 GPU cores. It brings up to 400Gb/s I/O performance. Apple promises dramatic Performance per watt against all the competition.

M1 Max has up to 64GB RAM, which outperforms all optimizations.

Apple claims to deliver the same performance with up to70% less power consumption.

M1 Pro will be able to compete with Discrete GPUs while consuming significantly less power.

They got a really big redesign, with thinner bezels better I/O, and a lot more.

First of all Apple Touch Bar is dead.

And yes, the #MagSafe is coming back to MacBooks.

You can charge with USB-C or MagSafe.

The New MacBook has a notch, a larger display with a Tiny Notch.

Apple claims to have the MacOS to take full advantage of the Display Design.

That’s not all, Apple’s new display is based on Mini LED.

Yes, Apple has finally done it.

Mini LED on MacBooks, with more than 1000 not brightness.

The mics now have a much better noise floor

They get 6 Speaker sound system that even supports Spatial Audio

Apple claims the new MacBooks are up to 3x faster than the previous generation i9 MacBooks.

In Apple Event October 2021 Highlights, Apple flexes how you would be able to quickly perform tasks that other PCs can’t even do.

#Apple made new MacBooks Pros that are super powerful while still being super-efficient.

This results in a lightweight machine that gives you excellent battery life. MacBooks now support Fast Charging. They charge up to 50% in just 30 minutes.

That’s it for the Apple Event October 2021 Highlights, in case you think we missed something let us know.

The new updates to Apple Music, and AirPods were really good. The highlight of the event was the M1 Silicon and the #MacBook.

Oh boy, they are great. I hope you enjoyed the Apple Event October 2021 Highlight