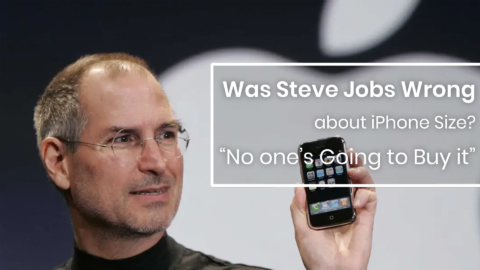 Steve Jobs was Wrong – Phones are Getting too Big

iPhone Size: Was Steve Jobs wrong when he talked about Big Phones, saying “You can’t get your hand around it, […] No one’s going to buy that.”

Steve Jobs iPhone Size has been a topic discussed many times before, Steve Jobs believed 3.5inch to be the perfect size for phones. Steve Jobs called the big phones “Hummers”

Steve Jobs had an opinion about iPhone size that anything more than 3.5 inches was too big to hold in hand, and should be reserved for tablets.

First of all Why iPhone Size was considered 3.5 inches?

It’s important to understand the logic behind a 3.5′ screen size to answer Was Steve Jobs Wrong about iPhone Size.

Well, the size 3.5 inches was defined by the thumb length of the average human, which meant ensured people can do single-handed operations on the entire screen of the phone without stretching their thumb too much.

Apple launched the first iPhone with a 3.5-inch screen, and Apple held with this screen size for the next 4 iPhones until the android market proved them wrong this made people wonder Was Steve Jobs wrong about size.

It was the first popular phone to feature a touch display and no keyboard, before the iPhone all phones were having small 2-inch screens.

The 3.5 inches screen on the original iPhone was so big for that time that people hoped that Apple would launch an “iPhone mini”

Though that never happened.

As time passed, iPhone 3G, iPhone 4, and other iPhones all had a 3.5-inch screen size.

As competition caught up with the technological advancements of the first iPhone, some companies started to improvise the design of these phones.

Samsung most notably was making phones with relatively large screens, 4 inches and 5 inches screens became common in the Android market. And that was the start of big phones, which lead to the question was Steve Jobs Wrong about iPhone Size.

iPhone 4 customers were facing network issues, where holding the phone in a particular way could cover the antenna bands and massively reduce signal strength.

To address this issue which was dubbed Antennagate, they had a press conference. In the conference, Steve Jobs gave his famous quote about smartphone size due to which today we are discussing Was Steve Jobs Wrong about iPhone Size.

During the conference, Steve Jobs tried to explain how people were holding the phone wrong, and how holding it differently can solve the problem.

To this, a reporter asked Steve Jobs about making the phone bigger, to give more space for us to hold the phone while still being able to accommodate antennas. He replied:

This was a classic example of Steve Jobs using his Reality Distortion Field to make people believe in it..

This was where the controversy started, and this proved to be the only major wrong prediction in his career after returning to Apple. This made Steve Jobs wrong about iPhone Size.

Why Did Big Phones Succeed? and What brought Changes to iPhone Size?

Before understanding/answering “Was Steve Jobs wrong about iPhone Size” we must understand why are so many big phones out there. We need to understand the need for big phones.

The argument that big phones make it difficult to do one-handed operations sounds really logical. What good is a phone if you cannot use it with one hand?

So why did Big Phones succeed?

Well, the answer to Was Steve Jobs Wrong about iPhone Size is, that people never wanted Big Phones, but they always wanted Big Screens.

Aside from the professional/work-oriented stuff you do on the phone, a lot of customers, use their phones for media consumption, watching movies, videos, and other tasks.

A big screen is really advantageous in it.

As a result, these big Phones succeeded, and proved that Steve Jobs was wrong about iPhone Size.

So as it turns out, the first part of his famous quotation “You Can’t get your hands around it” is true to this day, and is a problem even today,

But, “No one’s going to buy that.” is false, people buy Big Phones, and struggle to get their hands around them, for the sake of better media experience.

When Did iPhone become “Big Phone”

Steve Jobs was quite sure to keep the iPhone size constant.

When Steve Jobs died in 2011, he had already taken part in a lot of development of the iPhone 5, as a result, even though Steve Jobs was Wrong, Apple’s iPhone 5 too shipped with a small size.

The iPhone 6 and the iPhone 6 plus, were the first phones majorly developed without Steve Jobs.

And the iPhone 6 was a clear answer to the question, Was Steve Jobs wrong about iPhone size.

These phones were the first big iPhones that drifted away from small iPhone sizes, to clearly admit that Steve Jobs was wrong about Phone Sizes.

Apple after Steve Jobs, saw some dips in sales and profits, even when the industry itself was growing rapidly.

With the entire industry exploding and expanding outwards, it was quite important that Apple regained its market share and maintained its dominance.

They did customer surveys and many experiments, some of them were targetted to figuring out, “Was Steve Jobs Wrong about iPhone Size”

Surveys showed that the biggest complaint of the existing iPhone users was the small screen.

The Small Screen which once was considered advantageous and beneficial for one-handed use, had now become a disadvantage for Apple.

This isn’t the only time when an advantage became a disadvantage for Apple. Apple’s tightly integrated machines, with extreme control, were once considered an advantage as they allowed Apple to build machines effectively, and control every aspect of it.

But today the growing movement for “Right to Repair” which demands machines to be easy to open and use standardized tools has made Apple’s approach a disadvantage… Read more about Explained: What is the Right To Repair Movement? and Why Do We Need it?

Years later, when many of the documents of Apple have gone public, some slideshows and internal documents that discuss whether Steve Jobs was wrong about iPhone Size were also found.

Yes, Steve Jobs was wrong about iPhone Size, he had misjudged the requirements of consumers, they wanted a bigger display more than a phone with one-handed usage.

Over the years, a lot of things have changed in the industry.

As said earlier, the reason why we ask the question “Was Steve Jobs wrong about iPhone Size” is because people want bigger displays, not bigger phones.

Since the first iPhone, few things have changed in terms of smartphone design, that allowed bigger screen while still making the phone easy to reach with one hand.

This has been made possible by 2 major changes, which Steve Jobs never imagined, had Steve Jobs imagined these 2 smartphone design changes, we would probably not be asking Was Steve Jobs wrong about iPhone Size.

These 2 changes were the increased Screen/Body ratio and the taller aspect ratio in modern phones have allowed us to accommodate larger phone sizes.

Research has shown that the average phone size from 2016 till today has been roughly the same.

However, the average screen size has got a lot bigger, this has been made possible by narrowing the bezels, and stretching the screen as close to the display edge as possible.

Another reason why can get a big screen is the aspect ratio. First-ever Candy Bar style phones had no specific display ratio.

To better understand “Was Steve Jobs Wrong about iPhone Size”, we need to understand the design of the first iPhone.

This was quite normal at that time, and could easily allow the phone to fit in their hands.

Over the years this aspect ratio became 16:9, making the phone taller. As it got taller more than it got wider, the phone could still be held in 1 hand easily.

This was one of the main factors that allowed phones to accommodate larger displays while still having a small size, and thus proved steve jobs wrong.

The Steve Jobs iPhone Size and design of the first iPhone was a 0.5 inch thick device with 3.5 inch screen, that could browse internet, make calls, play music, send emails. It quite wide for it’s time, customers even speculated a skope of iPhone mini, and made many believe Steve Jobs to be wrong when he said that, “No One Is Going To Buy Them”, for big phones.

When we say big Phones, people assume that Bigger screen means bigger phones, that has been true to some extent, because for the most of the history of smartphones, the increment in screen size directly meant increment in Size of Phone too.

The phones had a better screen-to-body ratio, which meant that they could increase screen size without increasing the size of the phone.

Another big reason why Steve Jobs’s iPhone Size was wrong, is the aspect ratio. In earlier days, phones used to be having a screen with an aspect ratio of 4:3. Which made the phone really wide, this width didn’t allow the thumb to reach from one end to another end without becoming uncomfortable.

Over the years, the aspect ratio changed, in favor of 16:9, which meant the phones were now taller. And then we went onto 18:9 which is modern-day standard, and common use case.

I shall clarify once again, a large phone means the dimensions of the phone, and basically, it’s the footprint. Whereas a large screen means more area to display things.

While I admit Steve Jobs was wrong about iPhone Size, to some extent Steve Jobs’s perspective of iPhone Size is true to this day.

So, in 10 years, the iPhone screen size almost doubled, but the phone itself grew by just 3 cm in 10 years, this somewhat proves Steve Jobs was right about iPhone Size.

Undoubtedly Screen Sizes increased, over the years, but considering that Steve Jobs said no one would buy bigger phones he was right. The iPhone lineup grew taller by 1.4 cm in 10 years. Which is acceptable, at least I believe.

It perfectly shows that even though Steve Jobs was wrong about Phone sizes, and his argument of iPhone Size being 3.5 inches only was baseless, he is somewhat right to this day, where even after close to doubling the display size, the phone itself is the same.

Another great argument, that people want bigger displays and not bigger phones are the existence of Folding Phones.

In the past couple of years, another new trend that proved that people do not want large phones is the idea of folding smartphones.

A device of the size of a smartphone, essentially a small device which unfolds and becomes as big as a tablet.

This gives almost double the screen real estate as of the Body Size. If people loved big Phones, then Foldable smartphones would feel like a stupid idea, but it’s not.

We hate big phones, no one wants to buy Big phones, though we love big screens. There was a period when phones became really big, and that period, made people understand screen size and phone size to be the same thing which is not true. This misinterpretation is the reason why we considered him wrong

Was Steve Jobs wrong about iPhone Size, when he claimed  “No one will buy them”? Yes, he was wrong.

There was some level of truth in his statements.

Today it is true, that most people can’t get their hands around their phone easily. But they prioritize better display.