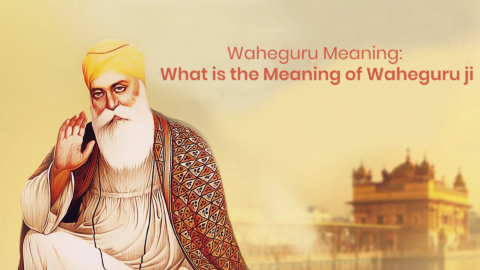 What is the Meaning of Waheguru Ji?

The word Waheguru has several meanings, definitions, and interpretations. It is a word commonly used in Sikhism. We will see the true definition and meaning of Waheguru Ji.

If you are reading this, you must have heard the word “Waheguru” or the phrase “Waheguru Ji Ka Khalsa, Waheguru Ji Ki Fateh” before also. Want to know what it means? We will explain all that, but first, let’s get the basics of Waheguru’s meaning sorted.

Sikhism has a couple of words to symbolize God, Waheguru being the most common of them. So, let’s decode the Waheguru meaning and understand Waheguru.

Waheguru Ji is the distinct representation of God’s name in Sikhism. It’s considered omnipresent and the supreme power. Waheguru can roughly be called the equivalent of God in Sikhism; however, that’s not the accurate description of the word, “Waheguru”.

Waheguru is omnipresent and is similar to God in Sikhism. They believe in one supreme form of God, which sets out the principles and morals for the proper functioning of the world.

Sikhism is majorly dominant in northern India. The state of Punjab in India is a hub for Sikhism.  Reference to Waheguru can be found in the regional language of Punjab, known as “Punjabi”.

Waheguru in Punjabi is a great way to understand the meaning of Waheguru.

Waheguru (Punjabi: ਵਾਹਿਗੁਰੂ, vāhigurū or ਵਾਹਗੁਰੂ, vāhgurū; also transliterated as Vahiguru) In Sikhism, this phrase is most commonly used to allude to God, the Supreme Being, or the creator of all. It translates to “The Wonderful Teacher” in Punjabi.

So what exactly is the meaning of Waheguru?

The meaning of Waheguru is not written in the Baani of Sikh Gurus, which are sacred texts for Sikhs. However, it can be found in Baani of Kashmiri Bhatt Brahmins in Guru Granth Sahib and Bhai Gurdas Ji Vaara.

Some other sources like Dasam Granth, have mentioned this many times as only title, but NOT as in verse. Overall, we could find many mentions of Waheguru, but most of them had a proper explanation of the meaning of Waheguru.

Let’s decode the Waheguru meaning by using ancient texts as well as language.

The word “wahe” means “wonderous” and “guru” means “Teacher“, this means that Waheguru simply put, is the “Wonderous Teacher”

Which translated to Waheguru the wondrous Lord/teacher who dispels the darkness of ignorance and bestows the light of truth, knowledge, and enlightenment among its followers.

Bhai Gurdas Ji was NOT a Sikh Guru; still, he was a prominent Sikh figure and had a lot of influence in his days. He was the nephew of the Third Sikh Guru, and therefore his words are still very important to us.

These 4 eras are known as Satyug, Dvapar, Treta, and Kaliyuga. Kaliyuga is the time frame in which we humans are currently living.

Bhau Gurdas Ji Vaara suggests, that the word Waheguru is formed from the names of the 4 Gurus of these 4 eras.

When Va, Ha, Ga, Ra sounds are joined by the usage of appropriate vowels, the sound of “Waheguru” is formed, and therefore is the meaning of Waheguru.

The word Waheguru meaning symbolizes that the recitations of all the gods of the four eras of humanity combine to form Waheguru, which is the soul of the humans according to Sikhism.

The Waheguru Satnam meaning can again be understood using Hindi/Sanskrit and Punjabi. We have already discussed the meaning of Waheguru, so we will focus on the word “Satnam” here.

The word “Satnam” finds its meaning in Sanskrit. “sat” means “truth,” and “name”, meaning “name,”. So Waheguru Satnam meaning comes out to be “The name of Waheguru is the only truth in the universe”

It postulates the supremacy of Waheguru, and that there is no substitute for Waheguru.

Wahe Guru Wahe Jio is a popular mantra that is often chanted as a prayer or a blessing. This is a mantra of ecstasy.

So what is the Wahe Guru Wahe Jio meaning?  Waheguru, but the meaning of Wahe Jio is quite simple.

The translation of “Wahe Jio” comes out to be “Great beyond description is the experience of God blessing the soul.”

So, what is the meaning of “Wahe Guru Wahe Jio”? According to Yogi Bhajan, it means a “clear perception of what is important to preserve,” and that it “links the essence of your purpose to the greater minds and souls in the cosmos.”

“Khalsa” means “Purity”. The teachings of Waheguru suggest that we can only become pure, if we see God in all people, and for doing that we need to get rid of lust, anger, greed, attachments, ego, hate, anger, back-stabbing, stealing, lying, cheating, misleading, misrepresenting.

“Fateh” means “Victory”. Victory can only be achieved when someone is pure.

Both are the meanings of God. One symbolizes Waheguru to be the “Wonderous Teacher” the other gives the meaning as “representation of teachings of 4 gurus from all 4 eras”

Both meanings of Waheguru are correct in their own way. What we must never forget is the teachings and lessons of Waheguru. It’s meaning useless if we do not implement their teachings into our own lives.

We must remember the message of “Waheguru Ji Ka Khalsa, Waheguru Ji Ki Fateh”, and always be on the path of truth and purity to achieve ultimate success.