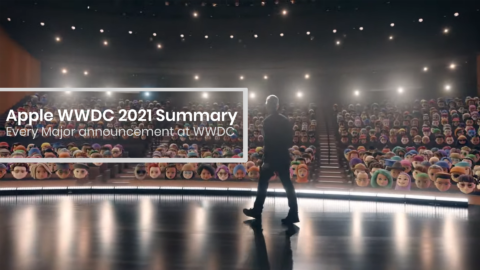 Apple WWDC 2021 Summary, get to know what happened at Apple WWDC 2021 event. Apple’s World Wide Developer Conference 2021 happened via Online Livestream on 7th June, which had many major announcements.

This was the 2nd consecutive year without any in-person audience for the WWDC, Apple made the event free to attend for all.

I have got all the major announcements summarized to save you time. From iOS to macOS, it was a great event overall.

The event starts with talking about iOS. The newer iOS as expected is called the iOS 15. The Apple WWDC 2021 Summary will tell you all major announcements about iOS 15.

It starts with updates for FaceTime. Apple’s Spatial Audio features are coming to FaceTime.

Another Big feature in WWDC 2021 announcements was that FaceTime is getting Portrait Mode for the front camera, to improve the viewing experience and focus more on the subject of the video.

Another Major Announcement at Apple WWDC 2021 was that Apple will now allow you to schedule meetings and share its links with people, this can be even done for Android users and Web Browsers too.

So now you can schedule a meeting, and have your friends with Android also join the video call.

Finally, we are getting FaceTime on Android, this must be one of the biggest highlights of the Apple WWDC 2021 Summary.

That was big. Haha

Apple after a long time brought some good updates to the notifications section, and that’s why it’s the 2nd major announcement of the Apple WWDC 2021.

Apple had made some must-welcome announcements for Notifications in Apple WWDC 2021, which got a new update with newer designs and bigger icons.

Apple WWDC 2021 Summary would be incomplete if we do not talk about Apple’s Notifications Summary, which is a nice way to stack similar notifications for quick access while saving space.

Apple will also use its on-device intelligence to prioritize notifications, relevant notifications would be shown higher up in the list.

Apple made some improvements to photos.

Live Text is Apple’s tool that allows you to select and find text in your photos. You can select and even copy the text from images and even screenshots. Initially, it supports 7 Languages.

One major Highlight of the Apple WWDC 2021 Summary is that Apple’s Spotlight on iPhone will now allow you to search for photos and videos on basis of location and other filters, making your media accessible more than ever before.

Another new feature brought to Apple Photos is in Photo Memories, with integration from Apple Music, now Memories will feature personalized music that suits the specific memory, making the experience even more beautiful.

Apple Wallet got a couple of updates, which allow you to store even more keys than ever before.

BMW will start shipping its cars supporting Apple Car Keys, so that you can unlock and drive your car, without taking your phone out. Bye Bye Keys

Apple Maps is expanding to more countries and is bringing elevation representation in Apps.

The Apple WWDC 2021 saw some great announcements in Apple Maps, that are worth noting.

These are limited to few cities for now but will expand in the future.

Apple Maps got a lot of updates, with Day time and Night Time colors.

A great 3d design with immense attention to amazing details. They will bring details such as 3d animations for popular landmarks, road markings, and even crosswalks.

AirPods did not have any hardware-related announcements, but there were some good software updates.

Apple WWDC 2021 Summary tells, that they have a new feature called Conversion Boost, will help in hearing for those who have minor hearing problems by using Apple AirPods Pros

AirPods Pro and AirPods Max will also support the Find My, allowing you to easily track your devices. No more hunting for your lost AirPods.

Besides that, the Spatial Audio feature loved by many is now coming to tvOS.

iPadOS has got many new features. As expected at the WWDC Event Apple Announced that the new iPadOS is called iPadOS 15.

It has got some significant updates too. We will discuss all of it here in our Apple WWDC 2021 Summary.

iPadOS 15 now allows you to place your widgets along with Apps on your home screen.

Apple now allows you to multitask by allowing quick access to the split view options available at the top of the app, this allows you to have multiple apps open simultaneously.

Multi-Tasking will allow you to open and shuffle between apps far more easily.

In Notes, now you can add tags to your Notes app so that you can easily search relevant notes.

You can now tag other people in your notes, and they would be notified easily.

Apple also announced Quick Notes, which is a great way to take notes in a jiffy, it will work on macOS and iPadOS

Another major announcement at Apple’s WWDC 2021 conference was about Translate App.

Apple is also bringing Keyboard Shortcut menu for iPad, when attached to iPad’s Magic Keyboard, making it an even more desktop-like experience

Another major highlight of the Apple WWDC 2021 Summary is the emphasis on Privacy.

Apple built great features in Email and Safari for benefit of customers.

Apple Mails will now block Pixels, which are codes that help companies now when you open the mail they sent you, and these codes also share your IP Address and other information without your permission.

Safari will now hide your details such as IP Addresses even better to protect your privacy.

Siri also got updates. Siri will now use On-Device Speech Recognization. It will now process even more data on the device, minimizing the need to send your personal information over the internet.

This will make Siri speed up processing your tasks, and make your life more private.

The 2021 Apple WWDC Summary also brings to you an update for paid users of iCloud, called iCloud+.

It is for the paid iCloud users, which has features for safeguarding your internet browsing from Safari. All internet requests will be relayed to 2 servers to encrypt the data even further, minimizing the information that internet companies get.

Neither Apple, not site owners will be able to access any data about your personal information.

These are great steps and show Apple’s attempt to strengthen the privacy of their devices.

Now let’s talk about WatchOS in our Apple WWDC 2021 Summary of Major Announcements at the WWDC Keynote. So the new version of WatchOS is called the WatchOS 8.

WatchOS brings small yet subtle features, such as Next hour Precipitation notifications, and many other small and big changes.

Fitness was a really important focus as always for the WatchOS. The Watch OS is now getting 2 new workouts, Tai Chi and Pilates. Apple Fitness+ is getting many 7 new workouts featuring Jeanette Jenkins.

Apple has redesigned the Photos app for Apple Watch.

Apple improved the Watch Faces, and brought new ones, a Watch Face particularly Highlighted in WWDC included selected pictures from Photos that were used as the Watch Face.

Apple WWDC 2021 Summary notes that Messages support Dictate and Scribble, and now they also have Emojis. This will make conversations even more fun.

Apple had an array of small yet significant announcements at WWDC 2021 for Home Accessories.

Besides that, HomePod will now feature Lossless audio.

HomePod Mini are coming to even more countries to make it even more accessible.

This is a seriously big update, that would push developers to develop for HomeKit too. The smaller user base of HomePods and Apple’s restrictions made the Adoption of HomeKit very slow among developers, hopefully, this will improve the situation.

After Home related stuff, now let’s head onto the MacOS in our WWDC 2021 Highlights.

As always the big question with every Mac release is what’s the name.

The next macOS is called macOS Monterey.

For those of you including me, who hoped to see a new MacBook, let me make it clear, there was no hardware at the event whatsoever. The Apple WWDC 2021 Summary tells that were no new Macs announced at the WWDC. While there was a lot of speculation of redesigned MacBooks with Apple’s own silicon, none of it was mentioned at the event.

Apple WWDC Major Announcements include Apple’s new feature for macOS called Universal Control. It is a great feature, at I can bet users are gonna love it.

Universal Control is a new feature that allows you to use the same Keyboard and Mouse of Mac to iPad. You can now control your iPad with the trackpad and keyboard on Mac.

This can also work with multiple Macs, you can use a single Keyboard/Mouse for multiple Macs too. Universal Control also allows you to share files between compatible devices.

AirPlay is now coming to Mac, it works similar to how it already works on other devices.

Apple is also bringing Shortcuts to MacOS, allowing you to automate your actions, and even do large tasks using Siri.

Safari has got a design overhaul, with a lot of design changes to efficiently use the space.

I hope you enjoyed reading my Apple WWDC 2021 Summary, and Apple’s Major Announcements at WWDC 2021.