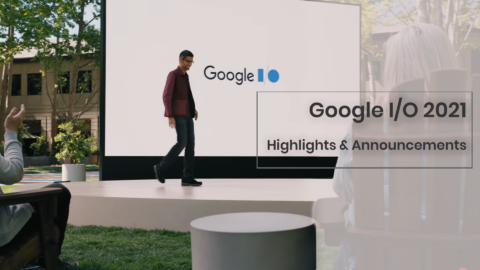 So let’s get started with Google I/O 2021 Highlights & Announcements that include Android 12 and a lot more.

Google I/O is Google’s annual developer conference, that is targeted at developers. Last year’s Google I/O was canceled due to a rise in COVID-19 cases.

Google I/O 2021 started with highlighting the importance of Google during the COVID times. Google helped people stay up to date with COVID info. Google was really useful in helping people find Vaccines too.

Google announced, that it will allow people to share documents while being in a Google Meet call. Google will also allow teams to collaborate and video calls on Google Meet directly from Google Meet.

These features are targeted to helping people have an easier time while staying in remote locations from their offices.

Google will also allow voting on projects, so that those who are in remote locations, can have equal say as those who are physically present.

The new TPU is powered by the V4 chip and is 2x as powerful as V3.

TPUs are a major upgrade from the last generation.

Google I/O 2021 announced that Google will be allowing its Cloud customers to use the TPU later in 2021.

Google announced that Google now deleted its customer’s account activity after 18 months by default to ensure that Google doesn’t contain older data and thus becomes a threat to your privacy.

Google I/O 2021 Highlighted that Google had made Phone-based authentication, a default security measure for all new accounts.

Besides this, Google I/O 2021 announced changes to its password manager.

Google I/O 2021 announced, that Google will bring a lot of integration between Android and Chrome, to ensure that your passwords always stay in proper sync.

I hope you are enjoying reading the Google I/O 2021 Highlights & Announcements.

Google also announced that they would automatically alert customers if their password gets compromised in Data Breaches.

Google announced a new feature called Locked Folder for Android. This would allow you to store photos, that won’t be visible in your Google Photos, and would be password protected.

Google I/O 2021 announced that Google Maps will see a lot of new improvements in Live View, allowing you to access Live View directly from the Google Map.

Google Maps will add Landmarks and Street Signs relevant to you.

Beginning with Zurich, the Live View will show Indoor Land Marks for Train Stations and Airports too.

Google I/O 2021 announced that Google will use AI to predict relevant Landmarks,

For example, they would suggest you Coffee Shops at 8 am, but will more likely recommend you some Restaurants for Dinner at 6 pm.

YouTube would soon allow people to directly purchase products that were featured in the video, reducing the hustle of hunting and trying to find the product.

Google Chrome, would remember all your recent carts and would feature them when you open a new tab, this will help you revisit any shopping plan that you left in middle.

Besides that, Google will also show you discounts on products in your cart, so that you don’t miss out on the deal you had been waiting for for a long time.

Google would be using patterns to collectively present photos, that in singularity might not look important, but when combined with similar photos, can mean a lot.

Google will allow you to hide photos of a particular person, or particular location whenever you want.

Google I/O 2021 announced, that now people will be able to remove a particular photo from the Google Photos memory and rename the memory altogether.

It is a design scheme that would use our behavior and anticipate our feelings, using this data will generate a custom color palette which will be used as the color scheme of the UI.

Google showcases how they also brought changes that are improving the usability of Android better.

Lock Screen now shows a large clock when there are no due notifications. The unlocking screen happens through a smooth fading transition.

Google I/O 2021 announcements included major changes to Quick Settings, it looks quite different, but it includes new features, like having space for Google Pay and Smart Devices, right from Notifications.

Published: 10th September 2021
Last Updated: 19th May 2021
Views: 74
Tags:#Android#Google#GoogleIO
previousA Stock Market Crash May Be Coming: 3 Things To Do Now
next[Definitive Guide] How to Use the Color Psychology in Marketing
Leave a Reply Cancel reply