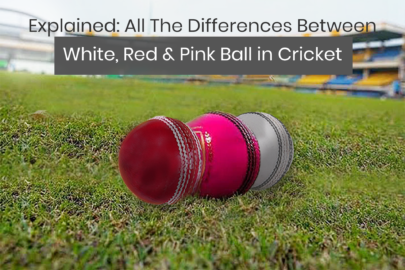 Professional Cricket nowadays uses 3 types of balls, today we discover Differences Between White Ball, Red Ball & Pink Ball in Cricket. The balls are used for different purposes based on needs, primarily the White Ball is used for ODI and T20 but Red and Pink balls are used for Tests.

We will compare White Ball vs Red Ball vs Pink Ball based on Game Play, Manufacturing, and various other features.

So let’s get started.

Why can’t we use the same ball in all formats?

Well that sounds like obvious, all the games are similar, same players, same bat, same wicket so why not the same ball

Traditionally Cricket was only limited to Test Cricket, and that used to have only Red Balls. These could be easily shined, provided great support for ballers, and lasted 80 overs on a decent pitch. It swings well, it can be easily shined, it’s durable, and works great on most of the pitches. The color is not very pronounced, as a result, it isn’t suitable for nights.

But Why is Pink Ball used in Test Cricket?

Pink Ball is used in Test Cricket Matches that are played in noon-evening, they start late in the day, and by the time they end, the sky is dark, some people wonder the why Pink Ball is needed in Test Matches when we can use White Ball too, as white is shiny

Pink Ball has a great shine and is durable too, this ball is relatively new, but it’s really good, it brings great visibility at night, it is more durable than White Ball and has the highest shine, but it doesn’t swing easily, and it has close to nothing to offer for ballers in last overs, due to no reverse swing.

The more subtle Seam of this ball can also be a blessing or a curse based on balling action of the baller.

So, each ball has different benefits, lets discuss all the differences between White, Red & Pink Ball in cricket.

The Cricket Balls, swing due to the difference in roughness on one of the 2 sides of the ball.

White Ball is already shinier, this is because it has a shiny coating over its surface to ensure better visibility to the batsmen.

This is necessary because these balls are used in ODIs and T20s which quite often are played in the evening, and end at the night, no amount of Stadium lights can keep them visible.

The added shine in the white ball allows more swing to the baller and therefore is arguably far more useful for the baller. In terms of spinners both the balls are quite similar.

The Red Ball is usually not very shiny at the beginning, players rub the ball with their dress or even apply saliva to make one of the 2 sides shinier.

The red Ball can be made to swing if the ball is properly maintained by the balling team.

It’s durable, and as it gets old, it is effective in the reverse swing too.

It maintains its hardness comparatively well, which is useful for the ballers, as hardball is important for good bouncers, and using demons of the pitch.

Pink Ball, has 3 layers of shiny coating, while the White ball has just 1 layer. While this makes it shiniest among all the 3 balls, we need to remember that the balls don’t swing just because shine, they need one shiny side and one rough side.

The 3 layers, while ensuring that the ball remains shiny after 80 overs of play, it also means that the other side takes really long to get rough, thus reducing the swinging capabilities.

In Short, the Red Ball is too rough, and Pink is too Smooth for a nice swing for the ballers, doesn’t mean these balls are bad, its just that the White ball is much more effective with the swinging of the ball

When we are comparing White, Red & Pink Ball in Cricket, we should also talk about the spinners, right?

While overall the spinners are more or less happy with all the 3 types of ball,

The less visible seam of the Pink ball makes it difficult for the batsmen to understand the motion of the ball thus giving an advantage to the baller.

Another Major difference between White Ball, Red Ball And Pink ball according to some ballers is that the seam of the Pink Ball is much easier to hold, and the spinners get a better grip over the ball.

The durability of the ball is an important factor among many differences between White, Red & Pink Ball in Cricket. A good quality ball should last the duration of the match to ensure that the ballers.

Comparing White Ball vs Red Ball vs Pink Ball in cricket, many factors practically affect how the ball degrades.

A White Ball being used in T20s will obviously get degraded quicker than a White Ball in Cricket, simply because T20s have far more hard hits that impact the ball itself.

In general, when talking about a build-up of Red Ball vs White Ball vs Pink Ball are made of the same material inside, they have cork inside, all the balls need to maintain a weight between 155.9 grams to 163grams

All types of cricket balls have the same size and dimensions, with slight variations in the size of the seam, this fundamentally makes White Ball, Red Ball & Pink ball quite similar.

However, practically using it is found the Red Ball is the most durable and white is the least durable.

White Ball faces the most abuse among 3 balls due to intense hitting in ODI and T20s, earlier there used to be 1 ball available for the entire duration of a #ODI, with time the ball started to get recolored in 35 overs, so ICC allowed the new ball to be taken at 35th over, but now with cricket getting even intense, the 50 over match has 2 balls used per innings, each bowl is used for 25 overs each.

The 2 balls are used simultaneously in ODIs, one over is done from each ball alternatively, so by the time of the 40th over both the balls are already 20 overs bowled, so the death balling gets great reverse swing while still allowing great visibility to the batting side.

Red Balls are really meant to be durable, in Test Cricket you only get a new ball after 80 overs, unless a ball is completely torn apart, or lost, you have to keep bowling for 80 overs, so these balls are made really durable.

The seam and stitch are strong enough to ensure that the ball doesn’t lose its shape in 80 overs.

Test Cricket has less abuse to the ball, which definitely helps it survive 80 overs, but in general, it is found to be more effective.

Another contributing factor is the pitch and the ground itself. #T20i often happens in the evening, and many venues have dew in the evening, so the wet ground degrades the ball quickly.

But in Test Cricket, matches end often before the sunset, and the dew has no role to play thus helping it survive.

When comparing the White Ball vs Red Ball vs Pink Ball in terms of durability, the weather can be a really important factor that leads to Red Ball is the most durable among them.

When comparing Pink Ball vs Red Ball they both are used in Test Cricket and are primarily made with the same material, but there are some key differences.

The difference between Red Ball and Pink Ball in terms of manufacturing is only the extra layer of shiny paint applied onto the Pink Ball, that makes it shine, but this layer is made to last 80 overs, so making it rough for swinging is touh.

The Pink ball due to extra shine is difficult to reverse swing and therefore unlike the Red Ball, it has much less to offer in the last overs of the match.

Also, due to dew, the ball might get quickly degraded, as the Pink Ball test matches continue till late in the evening. 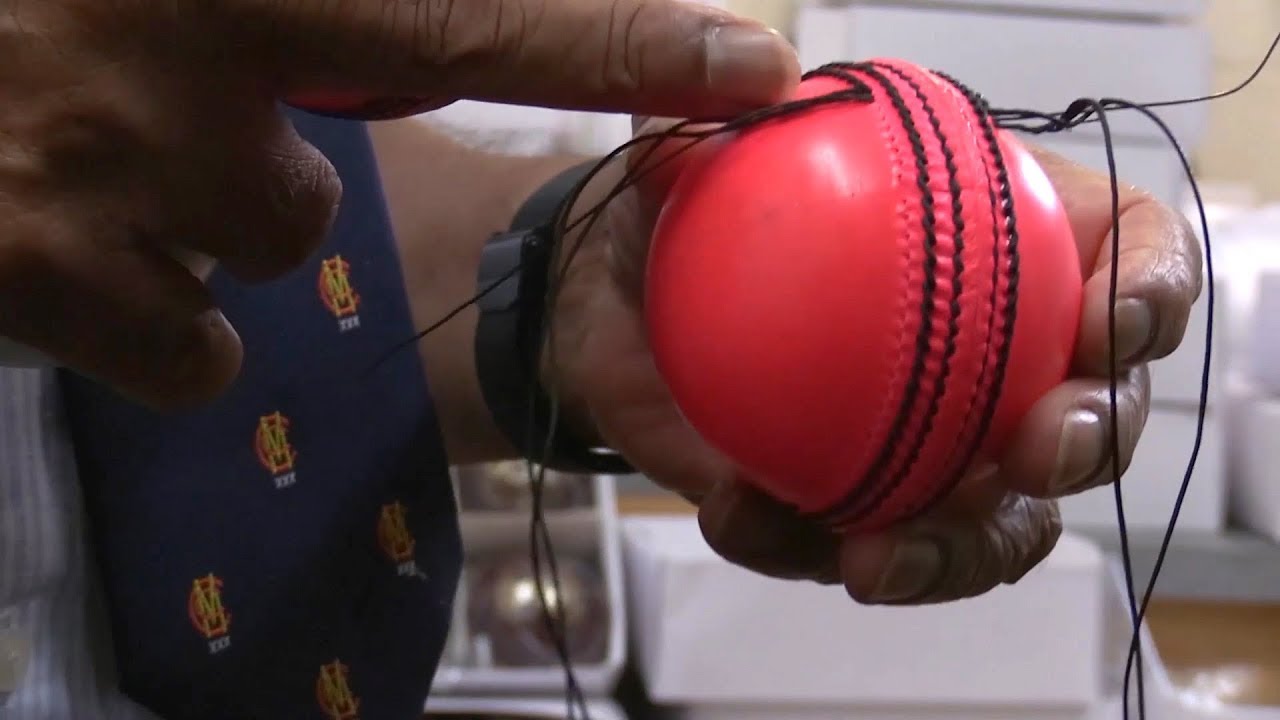 How Is Pink Ball Manufactured

However, when comparing the White Ball vs Red Ball vs Pink Ball in Cricket, there come significant differences outside.

The color of the seam used in the balls is different. Red Balls have a white seam, Pink and White Balls have a black seam.

Besides that in the manufacturing of Red Ball, initially, leather is colored by dipping into the dye, then the leather is stitched onto the core of the ball, and then finally the coating of lacquer is applied into a ball, this gives it its characteristic color and shine.

The ball is allowed to dry for some time so that the lacquer is well absorbed and then they are ready to play the game of #Cricket.

Pink Balls have are initially colored pink with the help of a pink dye, this step is the same as that of Red Ball, but once the ball is stitched, a shiny pink colored layer is applied to the ball to make it brighter, after this very important color layer, the lacquer is applied.

It takes up to 4-5 days to get the right gloss on the pink.

So, now we know the differences between White Ball, Red Ball & Pink Ball…

Red and White Ball have been in Cricket for many decades and have proven themselves.

Pink Balls have been in development for many years, and they have been used for over a decade now. They were first introduced in 2010 as a trial in women’s cricket and first-class cricket, there have been many experiments done with the ball, to find the best color for night matches.

The color pink was chosen after lots of experiments, feedbacks, and reiterations over the years. There were many other colors experimented with besides Pink too.

Pakistan experimented an Orange ball in one of its first-class tournaments too. The color of the seam of the pink ball was also a big question, some believed a green color seam would be the best visible, others were in favor of shades of grey, and others with black. And #PInkBall has been successful.

Finally, the Black color seam of the Pink Cricket ball was considered the best.

You might be wondering when was the first Pink Ball test played? Pink ball is used to play day-night #TestCricket. The first day-night Test match was played between Australia and New Zealand in November 2015.

The balls were initially manufactured by Kookaburra in Australia, and now other companies have also started using them, Dukes and SG have started making these balls too.

But Pink Ball is new, has it been able to prove itself to be good? Is the Pink Ball Good?

Well Yes, Spectators had a positive response, with over 85% of them claiming to be able to clearly see the ball.

Australia has been a strong promoter of Pink Ball, and most of the bilateral series organized in Australia have at least 1 Pink Ball match these days.

Pink Ball matches have increased the audience in the stadium too, as it was observed that people prefer to watch matches in the evening after work.

Balling and Batting sides have also claimed them to be better than any other alternatives.

There are still some problems, batsmen complain about reduced visibility in twilight and the time around sunset making it harder to spot the ball, for few minutes.

But with iterations and improvements, it is surely going to become normalized.