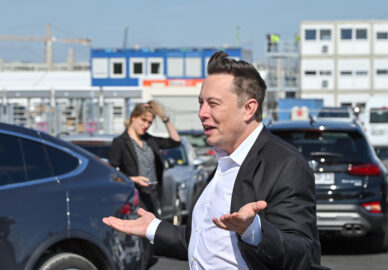 Elon Musk The Second Richest Man in the World

Elon Musk has got a 100 Billion Dollar increase in networth this year alone.

Yes, you read that right. #ElonMusk become the second richest man in the world thanks to adding a $100.3B to his worth.

The increase in Tesla’s value came after #Tesla’s stock was included in S&P 500, which is the biggest share index in the United States, shareholders and investors felt optimistic about this achievement, and that accelerated Tesla forward.

Tesla currently is the most valued automobile company in the world, by a big margin, and the future could see it grow even further.

His major gains come from Tesla. Tesla being a publically traded company, the stock value fluctuates, and can quickly add or remove billions from his networth.

This is the first time he has ever become the 2nd #Richest Person in the World.

Earlier Bill Gates was the second richest person in the world, but after Elon Musk’s gains, Bill Gates is 3rd Richest Man in the World.

#JeffBezos is far ahead of Musk, considering that Jeff Bezos is ahead of Elon Musk by about $50B+

Elon Musk added about $100B to his worth this year, a similar magic in future may help him take the crown of being the richest in the world in 2021.

Tesla being a publically traded company, the valuation of the company can change in no time. This may lead to Elon not being the 2nd Richest Man in the World very soon too, and bringing back Bill Gates.

Jeff Bezos has been the richest man in the world since the year 2017. Quite a good time for him, but his thrown is being threatened hard by Elon Musk, and his gaint business empire.

He runs couple of companies, Tesla, SpaceX and Boring Company are a few to name.

But Tesla is the most financially valuable amongst all, and it being a publically traded company means it’s value changes quite quickly, and thus remains in news.