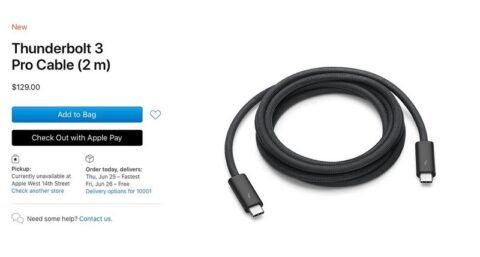 The $129 Apple Thunderbolt 3 Pro Cable is NOT Over Priced

Sure $129 for cable sounds too much, its just an ordinary looking cable right? No.

The Apple Thunderbolt 3 Pro cable, is not a normal cable to charge phone, rather, its a Thunderbolt 3 used to connect eGPUs, and transfer data at speed of 40Gb/s thats insanely fast.

Sure most of us wont ever need that high speeds and would never want to connect external GPUs. But it isnt for normal people, its like comparing a Honda with a Ferrari, both are cars, both of them have there own benefits, but just because Honda does everything that you want does not make Ferrari overpriced or useless.

It’s just that you dont need the Ferrari, for a person that needs a fast performance car, Ferrari makes sense. And the price comparison should be among may be Ferrari and Lambo, as Ferrari and Lambo are both targetted to roughly the same audience.

Similarly, the $129 seems outrageous as most people wont use it ahead of charging there phone. But for the person that needs it, there is nothing really as cost effective as this cable. And I shall talk about it below.

Besides being Thunderbolt 3 certified, it also is Display Port Compatible, infact it can power any display upto 6k resolution with ease. Infact the Apple $129 cable is the same cable that ships inside the $4999 Apple Pro Display XDR, its just that they started selling it sepratetly.

Well one of the major factors is actually the length. This is for professional use, and for pros speed matters. Due to limitations of the cable itself, a normal Thunderbolt 3 cable can be only 1.5 feet or around 0.5 meter long.

There are cables longer than this that exist, but they do not deliver that 40Gbp/s speeds. Any normal/ordinary Thunderbolt 3 cable would slow down beyond 1.5 feet but Apple’s cable is more than 6 feet.

So, Apple does what is called an Active Cable. The Thunderbolt 3 cables are of 2 types, Active and Passive. The cables which we talked about earlier, and termed the “normal cables” are actually Passive cables. But Active Cables on other hand can handle this speed for 2meters easily.

Active cables have besides high quality, a lot of additional curcuitry, to make it maintain the speeds. And while the actual cost of quality and increasing the length isnt sky high, but the cost of making an active cable is really a major factor leading to the justification of high cost of Apple Thunderbolt 3 cable.

So this all together in a single adds up to the #cost overall.

This things are really professional load and for #professional use like #VideoEditing or Heavy File Transfers you surely have cost increments too. Specially the Active Thunderbolt really makes things expensive. Their are other things such as Thunderbolt certification which costs about $10 per cable.

Why I stress out over the length is because Apple also sells a cable thunderbolt 3, which is 0.8M in length and costs $39. At about 1/3rd the cost the only 2 differences are that the cheaper one is 0.8m and it supports daisy chain of 3 devices only.

Most of the people who have dedicated GPUs wont need a thunderbolt cable, and the ones with external #GPU ones would always be unsatisfied with the short length of the cable.

So I explained what features it has, why the length causes the need for it to be active cable taking costs high, and then I have shown you that reducing the length reduces the cost too.

It’s price is almost adequete for what is gives us. Search up on internet and try to find a similarly speced cable at costs cheaper than this. We dont exactly know the bill of materials and how much does each thing cost. But the best way to find out is it over priced is to compare it with competion.

One of the closest competition to this cable which I could find out was from Belkin.

Now Belkin Mixit is a popular brand for computer accessories especially the cables market. So, it can be taken as a decent refernce for comparing prices.

The Belkin 2M Thunderbolt 3 Cable costs 80 USD, $79.95 to be precise. It’s 2meter, Thunderbolt 3, 100watts power, USB Type-C, 6 devices in daisy chain. It seems pretty good, albiet it lacks the USB 3.1 Gen 2 compatibility and it does not have Display Port compatibility.

It can only power the displays via #Thunderbolt 3, and does at max support FHD displays and not the 6k displays that the #Apple ones handle

This is a really amazing cable. For the price it seems a no brainer. It’s a Active cable, Thunderbolt 3, Display Port Compatability, 100 Watts Power delivery etc. It seemed like everything was good, and it costed $65.

So when I read about Zikko, and was about to delete my article, because it seemed to be exactly half the price, though it does not support charging a USB Type-C only device like phone, but still it had almost everything same.

And I was suspicious about low cost, so I checked for the reviews and Amazon overall 4.4 rating seemed to be really good.

But the fact that you are reading this article means I surely found a flaw.

I noticed that there are 2 versions of this being sold on Amazon, one was 1.6 Feet, and other was 6.6 feet.

Now I discused earlier how, length can massively cause performance issues.

I read the reviews specific to 6.6 feet version, and found many of them complaining about performance drop and not connecting to there specific machine. While 1.6 feet was really strong reviews, the 6.6 Feet had some bad reviews, and 1 star ratings of unsattisfied customer.

Even if we keep Apple aside, Belkin is usually the most affordable option, with my personal experience, if something is cheaper than Belkin then probably it lacks features or has Quality Compromises.

Considering this all, I wont recommend risking your money. For 1.6 feet it seems solid with great reviews but cant say anything for the 6.6 feet one.

Considering all this, it seems Apple’s cable actually does more than Belkin, so it obviously more than Belkin. And Belkin being a decent comparison, I think price can be justified.

Conclusion and My Take

The Apple’s $129 Thunderbolt Cable, isn’t expensive for what it does. But its a professional grade utility, average person should never need this power, and it isnt designed for the average person either.

It’s the Ferrari, and may be #Belkin and few others were in the same league, but the features it gives surely makes the price of $129. Though Apple would still make some bucks selling it, there isn’t like an outrageous amount of money being charged by Apple, for the Apple’s Thunderbolt 3 cable.

It’s costly, but its good value for money for what it does, and its only made for professional use case.