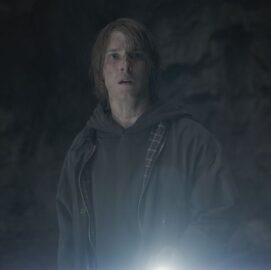 Dark Season 3: What Really Happened In The End??

Spoiler alert!! This post contains major spoilers. Dark is the most confusing series om Netflix right now. It starts with a dissapearance of a young boy in a fictional town WINDEN and i dont think that i need to explain the story so lets jump right to the point!!!   WHO IS EVA? WHATS HER DEAL???

At the end of season two, Martha was shot by Adam which leads to Jonas becoming adam. But after that, a new Martha pops out of thin air and Takes Jonas to a parallel world with a ball( poke ball). Right before she leaves, she tells Jonas that he have to stop apocalypse and save both version of Winden along with its people. But as always, things are not as easy as it seems. Jonas have to save Winden and battle a new powerful enemy “EVA” who wants that cycle should continue. ( EVA is the older Martha). The #problem is not very different from the one he faced in his own reality,just like Adam manipulates Adam and Noah, Eva only uses Adam and young Martha as #pawns in a bigger play.   WHATS EVA’S GOAL?? Eva wants that time loop should not be broken, while Adam wants to do thwr opposite: destroy the time loop so that both world #destroyed and then create a new one where time doesn’t exist. But there’s a reason why Eva wants to maintain the time loop, during his visit to this version of winden, Jonas has ses with Martha which results in a baby named ” #THE #ORIGIN” ( strange name) that connects these 2 Worlds in a same time loop. Adam wants to  destroy the baby and end the time loop while Eva wants to continue the time loop so that her baby can live. This is not just a battle between good and evil, its battle of love – the love of baby versus everyone he cares about. This fight shows us what people can do to save their loved ones.   THE UNSUNG HERO,CLAUDIA Claudia also known as THE WHITE DEVIL. She manages to distant herself from Eva and Adam and she also finds a way to end this cycle once and for all. She understand that she was used by Eva. Throughout the first two seasons Claudia has been shown fighting with Adam,the reason was that Eva promises Claudia tha she will save Regina from #apocalypse. Then she remembers that her older self once said” if everything goes right, Regina will be saves” which hasn’t been the case when she was helping Eva so she understand that she was used by Eva. To break the time loop, Claudia A kills ClaudiaB( who has been guiding her) the she takes her place. Few minutes before apocalypse , she realizes that for short period time stands still that’s when everyone break the loop which creates two #realities in the same #Universe. Adam doesn’t know about this and thus Eva utilizes his knowledge ansd sends 2 Martha’s to two different paths. Claudia does the same thing with two versions of Eva, she send one to a path where she will be killed by Noah and the other to where she is now. Claudia realises that these worlds weren’t meant to exist. These were created by mistake of clock master. He ended up splitting the original world into three while creating the time vessel.   HOW FINAL SEASON CONCLUDES.

Dark Season 3 Episode 2 Netflix 2 1593014022
The only way to stop the loop was tk stop tannhaus from creating the time machine which he created after the death of his son , his granddaughter and his daughter in law. Claudia explains this to Adam who guides Jonas and Martha into #original world to stop the car crash. Jonas and Martha travels back to original world by using caves passage but they figure out that if they prevent the car crash, they will end up erasing persons who are born out of the time loop that includes them,Noah and plenty others. Unfortunately that’s the only way to save their loved ones. In the end they decide to do the “THE #RIGHT #THING” and they prevents the crash. After that, they and others are part of the knot slowly dissapears in a sad scene. But that’s not all, just before credits a pregnant is seen with her friends and they ask her what would be the name of child , Hannah replies” I think Jonas is a beautiful name”. Dark, the series that started with time travel ended up on human nature. Its sad that we will not get a season 4 but this will remain in our hearts forever.