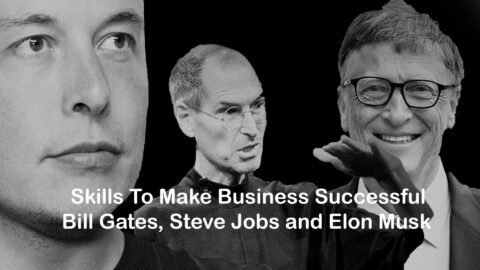 Elon Musk has discussed about the common skills that helped Elon Musk, Bill Gates and Steve Jobs build successful business. The most important being Human Resource. In an interview with Autobild.tv he said “They’re obviously very driven and they’re very talented,”

They are said to have been able to attract a lot of talented people to their companies. Steve Jobs and Bill Gates have been rivals in some cases as they share common business fields. But they have the same basic characteristic of ability to motivate many people and attract new people to their companies. Steve Jobs used to divide employees into teams and take ideas of all the teams. For eg. while making iPhone he made 2 teams, one worked on scroll wheel system to navigate iPhone and other for touchscreen interface.

They used to make people feel like they were contributing towards a common goal. All companies give free perks to keep employees motivated. Tesla employees are allowed free coffee for example. Microsoft offered innitial employees stock options for being innovative. Though no one does free perks better than Google, which offers free food, allows pets in offices, and have their offices painted bright to make them feel good. These perks don’t make employees wasting time, and unfocused instead they make employees to feel a part of company, this allows people to interact with each other and bring up newer and newer ideas.

Steve Jobs many times used his Reality Distortion Field to motivate employees. Most popular example follows, Steve Jobs in 1984 was working on Macintosh computers. Engineers working on Macintosh were asked to reduce 10 seconds from boot time. Disagreeing with it, engineers refused to be able to reduce even a millisecond from it. Steve Jobs, addressed engineers to say, ‘would you reduce it’s time if someone’s life depended on it.’ His point was thousands of people would daily waste 10 seconds more booting the Computer. The sum time amounting to many lives. Few weeks later the same engineer, came up with rewritten code and reduce the time by 20 seconds. Idea is not bribe employees but to make them a part of company and feel like a family. Other companies have employees, where they compete each other and cancel out each other’s work. In Companies like Google, Apple, Microsoft, Tesla, employees interact with each other due to the friendly environment, and help out each other in their works Take this like in colleges best friendships and happiest times happen in corridor rather than class. And these friends do anything for each other. In same manner We should have our corporations support employees to make them feel part of family, and they would do anything for you.