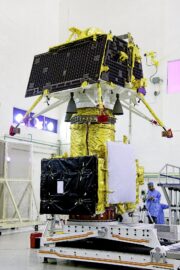 Today on about 2:00 am chandrayan 2 was supposed to land on the moon but only at 2.1 km above the moon’s surface signal was lost, a lot of you might be thinking how can it be considered BIGGEST #SUCCESS. Well there are many reasons for that. It was the second lunar mission done by india , it consisted of a lander and rovers. The pragyan rover was supposed to find water on moon. We were all very #proud of isro when we launched the chandrayan 2 and today it was supposed to land on moon. India took a great risk by doing it beacause they planned to land it on the #DARK SIDE of the moon, TILL NOW,ONE OF THE COUNTRIES HAVE DONE IT , india was supposed to be the first but the signal was lost at just above 2.1km from moon’s surface. It is a mystery how did it happened. Well in my opinion the dark side of the moon is still a mystery and this could be the reason of faliure. The dark side of moon could have some kind of unknown substance which resulted in the signal lost or some extra terrestial species could have done it. Outer space is still mystery and nobody can deny the fact that aliens could exist. It is possible that dark side is a home of aliens and they could have disrupted the signal so that their existence can remain a secret. It is possible that due to some space waves the signal got disrupted. Well there could be a lot of reasons but we are proud of our isro scientists and we would achieve success the next time, if we can do it once then we can do it twice also. Moreover we are proud of our scientists and we are proud of INDIA.