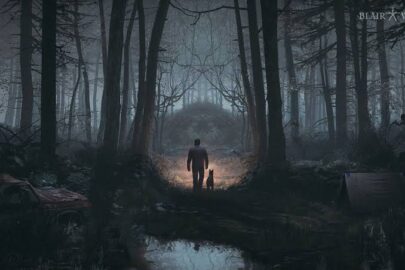 Get Ready To Experience The Blair Witch Project Through First Person View!!!!

In 2000’s a 3part film #”the blair witch project” was released and it was a great film. In 2019 a new BLAIR WITCH game was announced which released this september. Its a very great game , it follows the 2nd part of the film. We play as police officer who goes to the #BLACK #HILLS to investigate the case of a lost 9year old boy. We also have a pet dog as a #companion with us named” BULLET” , he’s a german shephard. Same as outlast in this game also we have a night vision camera but blair witch delivers it more perfectly. In the morning the environment is beautiful but in night it will give you a chill down your #spine. In the original movie there was a house and in this game too. Unlike many other # horror games, in #blair witch you dont always have to run it has a complete combat system but at some points you have to sneak past a #enemy. At night it seems like forest is alive, every sound gives you chills, there are #creepy melodies playing, strange noises communicate with you. Blair witch also works on myths as they dont represent #witches as monsters coming at night to hunt. Blair witch also tells the #backstory of our character and our characters story is very sad. On our journey we have a mobile,walkie talkie,torch and a backpack which serves as the inventory. In that creepy environment we are always accompanied by our dog which gave a felling of not being alone. Bullet(our dog) is a very good dog, he smells scent and acts like a waypoint, he also guides us to collectibles and whenever he smells danger he growls and alerts us. Blair witch is a perfect horror game that works well with myths. There are some minor issues like boring side #quests but they can be overlooked. Overall its a great game if you want to make most of the game you just close your room, turn lights off and play it with headphones, you will definately give you chills. If want to jump out of your seat with fear play this game:You will jump out of your chair after playing it Read about the most fantastic game of this year:Most fantastic game of 2019

Published: 9th September 2021
Last Updated: 3rd September 2019
Views: 208
Tags:#backstory#BLACK#blair#companion#creepy#enemy#HILLS#quests#spine#witches
previousIs Whey Protein Right Or Wrong??
nextThis Year Is Full Of Horros games, This one is the Best I have Ever Seen.
Leave a Reply Cancel reply