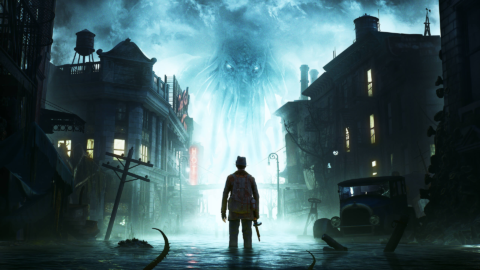 Horror awaits in THE SINKING CITY. Sinking city is a new horror game with great graphics its a game with a lot of things going on. You can dive in water with a diving suit and you end up coming face to face to legendary CATHULLU, yeah that Beast . Gameplay The Sinking City is an open-world detective game with a third-person camera perspective. It features an open investigation system in which the outcome of the player’s quests will often be defined by how observant the players are when investigating different clues and pieces of evidence. The town of Oakmont is made up of seven districts (Advent, Coverside, Grimhaven Bay, Oldgrove, Reed Heights, Salvation Harbor, and The Shells) which have all been affected by flooding to various degrees, and the player must use a boat to safely traverse the flooded streets to reach drier areas. The player can swim if necessary, but the water is infested and can fatally damage the player’s health and sanity. The player also assembles an arsenal of tools and weapons, and at times must use them to kill otherworldly creatures and dispel hallucinations. However, as Oakmont is an isolated place with dwindling resources and deteriorating social order, bullets have replaced money as the preferred currency; expending too many bullets can leave the player unable to barter for desired items. Another major resource is sanity, which is spent on investigative powers used to reconstruct crime scenes and identify clues. Sanity slowly regenerates on its own, but can be replenished faster with antipsychotic drugs. Disturbing scenes and encounters can cause sudden, sharp drops in sanity, affecting the player’s perception of the surrounding environment, and complete loss of sanity is fatal.So SANITY is very important in this game. Story: Charles W. Reed, a U.S. Navy sailor and Great War veteran turned private investigator, travels from Boston to Oakmont at the invitation of intellectualJohannes van der Berg to discover the cause of the nightmarish visions that have been plaguing him for years, visions which are shared by numerous other people and most commonly occur in Oakmont. Reed is hired by Robert Throgmorton, the influential and physically striking head of one of Oakmont’s leading families who has also been studying the visions, to help uncover the cause of the Flood plaguing the town. While Reed pursues this investigation and others using extrasensory powers of observation seemingly bestowed by his visions, uncovering the shadowy history and seedy underbelly of Oakmont along the way, he must guard his sanity as it is eroded by the town’s darkness, otherworldly creatures attracted to death called Wylebeasts, and the use of his own powers Sinking city is a very innovative approach towards horror game and it deserves our attention.