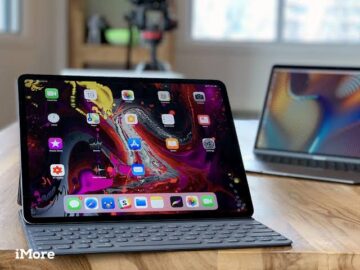 Can iPad Pro Replace Your Laptop For Pro Work

The iPad Pro, is a great device and after the announcement of iPadOS in WWDC it has become even better. But iPad Pro Replace Your Laptop for Pro Work.

Well had you asked me the answer to the question of ‘Can iPad Pro Replace Laptop for Pro Work?‘ a year ago, the answer would have been ‘No’, but after seeing the potential of iPad OS the answer is YES!

Apple did a great job with iPadOS. The present iPads run on altered version of iOS. But Apple, after many years has realized that the iPad needs more custom software to cater it’s needs, therefore they diverged into different operating systems.

The major problem that previous software of iPad troubled with, was the fact that they served mobile versions of sites. Sites like Google Docs which a pro would commonly use, are not available for mobile.

As a result it become a major disability and limiting factor, for iPad. And this very disablity in web browsing was a major reason why Can’t iPad Pro Replace Your PC for Pro Work. With the iPadOS, this has been fixed. Now the browsers will show desktop sites, making them better for pro work.

And therefore all the Pros will love it. Youtubers will now be able to use YouTube Creator Studio website on there iPads. (YouTubers: “Take My Money”)

The web browsing experience on iPad has never been that good. And specially because the Safari Mobile didn’t support switching to Desktop Mode. The very ability to fully use iPad Pro for full fledged web browsing, is a huge feature for me. And therefore I strongly Believe iPad Pro can Replace Your Laptop For Pro Work

The reason due to which iPad Pro can replace your laptop for pro work, is the fact that now, you can connect with other pro devices.

Earlier you couldn’t use mouse with iPad now you can do it, which is a huge hit and liked feature for all the pros with multitasking or complex software interaction. Ability to use mouse helps iPad Pro Replace Laptop for Pro Work. The iPad Pro with the iPadOS has better file management.

The new files app allowed easier navigation to files and easy operations also. Along with this the USB Type-C that #Apple included with the #iPad Pro 2018, was mostly useless because it could not connect to any camera, or storage devices. This was big no in the debate of can iPad Pro replace Laptop for Pro Work.

But then the newer OS allows connecting USB drives, and connecting cameras to directly import images and edit them in Adobe Lightroom.

Apple Pencil: The Navigation Tool That iPad Excels with

Apple pencil is Apple’s weapon, to be better than laptops.

The comfort of writing and drawing that Apple Pencil 2 provides is unmatched. And it is a major reason, due to which Can iPad Pro replace laptop for pro work

The Apple iPad Pro, which was much into debate because of the #SteveJobs, “Who Wants a Stylus” analogy. The Apple iPad Pro came with Apple Pencil, which was considered against the initial ideology of having direct use of fingers. The #ApplePencil has been great.

It allows you to easy switch tools and write/draw naturally. The earlier input latency of iPad was around 20ms, this has been reduced to 9ms now. The performance difference is amazing. This makes writing/drawing of iPad much more fun, seamless and effortless. And this improved software for Apple Pencil is another reason why can iPad Pro replace the laptop for pro work specially for artists, and people who want much more portable device.

These 3 features have made file management easy, data transfer along with import/export possible and high level portability possible. This is another thumbs up for the iPad Pro. This must have convinced you and made you confident that iPad Pro can replace Laptop for Pro Work

Pro Apps For your iPad Pro

The iPad Pro, is a comparitvely less popular form factor. The apps and software support of iPad Pro has been not been very good lately.

The iPad Pro Replaces laptop easily as the new apps start to flood in. Many Creatives have already praised the #Adobe Photoshop and Adobe #Lightroom on iPad.

This makes having and editing photos on iPad effortless. Now, in mission of iPad Replace your laptop, you need full suite of apps.

The Apple’s own Final Cut Pro, which is for video editing is NOT available on iPad, Final Cut is one of the greatest video editing softwares, and it could have been great to have it.

A 3rd party app, Luma Fusion is a great video editing app for iPad Pro. And seen in Johnathan Morrison’s Youtube video. The performance was amazing.

He rendered a full video, and it’s amazing to see it render in real time. These is not just why can iPad Replace laptop for pro work, but why can iPad be better than iPad For Pro work.

Apple has been hard at Shortcuts and easy accessibility with Apps on iPad. Things have been complicated because Apple uses ARM architecture on iPads. Laptops use x86 architecture.

This difference is technologies makes things difficult for app developers. Though Apple, is trying really hard to have good apps so that iPad Pro can replace laptop for pro work.

The stock Apple apps, and availability of the quite large no. of apps makes it amazing. Though there are things like need For Instagram for iPad Pro, and obviously Final Cut Pro are necessary inclusions. This is a area, which will still take a year to improve and it’s a gradual process. The answer to the question Can iPad Pro replace laptop for Pro Work is majorly dependent on availability of Pro apps for it.

Multitasking And Navigation: The uniqueness of iPad Pro

The fact that #Apple iPad Pro has a smaller screen in comparison to laptops is very well accommodated with the multi-tasking gestures and various other effecient uses of screen real estate.

Now the iPad will have widgets on home screen, a right swipe will give you access to the same, they will be handy, and will reduce The split view feature common in phones now days exists on iPad, to allow multiple apps to be open on screen side by side. But now this has been by far improved with Apple Slide Over.

Apple Slide Over, allows you to have 2 instances of same app open at the same time. For eg. You could be composing a #email while reading text from another email you read, side by side. Apple has done #great job with this stuff, and i can assure you that Apple is working really hard to make it great.