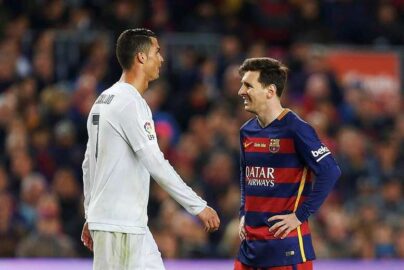 Who is the Greatest Of All Time(GOAT):Messi or Ronaldo Football is a widely watched sport all over the globe and years after years many footballers have came and gone. Now the real question is out of all of them who is the best? The question that diffrent club supporters give answer differently, Real Madrid fans will say Cristiano, Ronaldo, Beckham, Figo, Roborto Carlos, Iker Cassillas  on the other hand Barcelona fans would say Messi, Ronaldinho, Romario, Maradona, Iniesta, Xavi, Pique(and yes he is Shaqira’s boyfriend?) coming back to point, out of the years LaLiga And Champions Ligue has been dominated by 2 players Ronaldo and Messi, when ronaldo was in real madrid he played 4 finals and won 4 finals and also while his time in Man U he played 2 finals but both of them he loosed to 1 team FC Barcelona and in both of the finals, one man scored, ‘Messi’ but this doesnt say anything about who is better. Now before coming to a conclusion we must understand that both messi and ronaldo are very diffrent players and both of them have diffrent playing styles. Ronaldo is more of a Solo act he is fast, likes to humilate other players with his skills, likes to score penalties which explains his nickname ‘Penaldo’and is always tearing up opponent’s defence on the left flank. Messi on the other hand likes to dribble and scores excellent free kick,he takes time to understand other sides playing style and then strikes the banger by sliding between the defenders. Now we must understand that both are are excellent players for their respective side and have been able to save their team most of the time. But after Ronaldo’s recent conflict with perez and his move to juventus his season has gone in what we call a blunder and by stats if we compare we see that messi has more goals than ronaldo despite have way less matches. Although messi has been unable to win an international trophy and his country blames him for not playing his best with Argentina, but we must also see that all of argentina’s squad except messi is rather way too much dependent on him, he managed to put him in finals once in 2014 but argentina’s squad failed him in the finals. So concluding this article i would like to say that Messi is the GOAT clearly for me, any argument against this would be appreciated and talked upon so feel free to help bring the best.