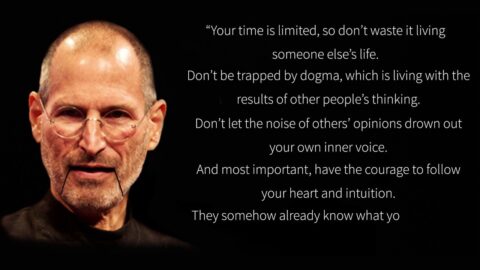 Your Time is Limited Don’t Waste it Living Someone Else’s Life. How many of you recall your last days of school, and recall the memories years and years later. And most the people in the last days of the school, don’t recall there classmates as much as they do years and years later. We never realize the importance of the moment when we are in the school, but we realize it when we leave it. The life is not short, but we make it short. Living someone else’s life means that u restrain yourself from reaching your goals or motives. We all love to spend time with our friends, but because we don’t live each moment doing things we love. The people who would have ever spent time living each moment they got to spend with there friends, or the ones who understood transience of life will spend every moment to there fullest. These people will never feel sad for missing out great moment with school friends later in life. Now When Steve Jobs said that Your Time is Limited Don’t Waste it Living Someone Else’s life, it meant that love and love each and every small moment like this to its fullest so that you don’t regret it later. Our time is limited because our lives are limited but life as a whole is infinite. The idea is that in every small moment be it as small as spending time with friends, we should do it to its fullest. Steve Jobs very well followed it. He would have never dreamt that he would die at a age of 56, but when he died, he died fulfilled. He had accomplished many dreams and ambitions in various aspects of life. He lived his each day asking himself would he spend his day like he was doing it was his last day. This meant that he everyday tried to accomplish all the things, that he would like to do in life. When most of the people think of living each day as if it was there last day, they think they would like to become CEO or earn a billion dollar, then it is impossible. Life is short, if we live each day as a step towards becoming the CEO of the company, then may not be next day but one day they will definitely be the CEO of the company Our life is short if we try to meet expectations of everyone. We don’t have to live the life according to status quo, we need to make our own rules. If we understand the transience of life, and live each and every moment for ourselves having our goal in mind we would achieve it one day or the other. One of the most important thing to understand is that it is a constant process, if we do it constantly some day or the other success will knock out door someday. Mahatma Gandhi, Martin Luther King, all these were great visionaries. They loved each moment of there life towards one goal to achieve freedom, equality and independence. They had a vision and a belief. They put every ounce of there life in to it. At a time when no one believed freedom , independence and respect possible they believed and refused in living others life. Such infinite mindset,  a way of living life, a belief to challenge the status quo is what it means to not live others life. Live a life not bound by rules set by others And acting quickly and consistently towards your goal is full recipe. You can go to gym 12 hrs a day for a week, but that would not be fruit full. But if you go 1 hr a day consistently for many days your body will get in shape. Consistency matters more than intensity, being consistent throughout would do more success than being intensive for short burst. Your Time is Limited Don’t Waste It Living Someone Else’s life.