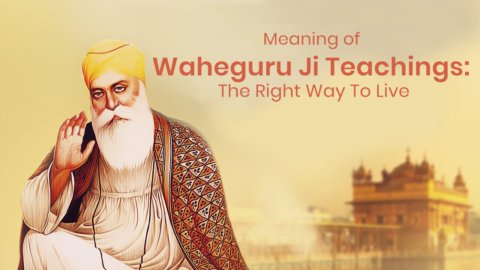 Waheguru Teachings have had the true moral values, & cultural norms but the teachings of Waheguru still resonate with us, which we apply to this day.

The world would not be this good without Waheguru Teachings.

Today we discuss all the Waheguru teachings about humanity, relationships, ethics, and many more, the lessons and principles that Waheguru teaches the right way to live.

Waheguru is the soul of Sikhism. Sikhism was built on the Words of Sikh gurus. Sikh Gurus with their words molded the entire Sikhism over the generations. Some of these gurus spoke about Waheguru too.

Waheguru Teachings teach us many important lessons, but Waheguru has many short lessons too. Guru Nanak who is one of the most significant Sikh Guru also gave crucial lessons.

What are the 5 Teachings of Guru Nanak Ji?

Below are our favorite 5 main Teachings of Guru Nanak Ji:

Guru Nanak taught us that one needs to have a submission to the will of God. One has to do the deed, and the rest should be left to god everything happens with God’s choice.

Those were some of the many teachings of Guru Nanak Ji.

God will do what is good for us. We simply have to have faith and walk on the path of truth.

Understanding the Meaning of Waheguru Ji is no cakewalk, it’s deep and you have to carefully break down the word “Waheguru” to understand its meaning.

Guru Nanak has formulated that there is only one god. Despite various religions, there exists only one almighty.  Guru Nanak Dev Ji said, ” I am neither Hindu Nor Muslim, I am a follower of God”, which spoke about his belief in one god.

In Sikhism, the god is omnipresent, shapeless, timeless, and sightless. ( Nirankar, akar, lakh). Sikhism stresses that before creation there was God, and because of His will ( Hukam), the Illusion ( Maya of attachment and enticement) came into being.

Waheguru Teachings show that he believed in rebirth, for him god had no religion and no gender, God would reward us based on our deeds. Waheguru Teachings about Religion used the term “Ik Onkar” The symbol is written in the Gurmukhi script and has several components.

I hope you are enjoying learning the Waheguru Teachings…

Similar to Waheguru Teachings, the Word Waheguru itself is super deep, Waheguru Meaning is crucial in understanding Sikhism properly

Guru Nanak Dev Ji told in front of King Babar “You are not Babar but JABAR”. We should always speak the truth without any fear. According to Guru’s doctrine, the victory of truth is not dependent on ending or suppressing falsehood but on standing firmly by truth.

That is why Guru Nanak Dev Ji exhorts that to stick to the truth and to remain on the side of truth when it is necessary is very essential.

One should always state the truth and never depend on lying. As per Sikhism truth is high, but the highest is truthful living.

Honest Earnings: Earning/making a living honestly, without exploitation or fraud. Naam japo ( focus on God): Meditating on God’s name to control the five weaknesses of the human personality. Vand chako (Sharing with others): Sharing with others, helping those in need.

According to Waheguru, 3 duties that a Sikh must carry out are:

Guru Nanak’s Vision about Castism and Division of Society

Guru Nanak’s life was in a century filled with Caste-based extreme discrimination, it was a curse to be a human sometimes, seeing what he saw with the cast society at his times, he was strongly against it.

The situation in India at the time of Guru Nanak Ji’s birth concerning caste discrimination: To understand how big was this caste-based discrimination we need to go back 550 years. When a dog could walk up to the well of so-called high caste people but a person belonging to low caste could not dare to walk near the same well.

Even before we learn what were the Waheguru Teachings for Casteism, we need to understand why he believed in those teachings, and what were the circumstances that brought this condition. Some examples of prevailing mindset in society at that time were :

Born of the feet of Brahma, if a shudra speaks harshly to Brahmin, Kshatriya, or Vaish, the king should get his tongue cut. (Manu Simariti Chap. 8, S: 270)

If a shudra calls people from other castes harshly then put an eight-inch-long hot iron rod in his mouth.
If a shudra, in pride, instructs a Brahmin in dharma then the king should put hot oil in his mouth and ears. (Manu Simariti Chap. 8, S: 271-271)

Waheguru was strongly against all artificially created divisions and all discrimination, both in word and deed. He said that the caste of a person is based on what he does. Everybody is equal before God, irrespective of gender, color, caste, or creed, and it is our actions that move us closer or further away from Him.

He put forward the thought that salvation occurs not from pilgrimage or rites etc, but through heart, spirit, and soul. For this to happen continuous seeking of knowledge must take place which is dependent on one’s guru.  Everybody needs a Guru. Make your Guru Gurbani, the Shabad, and not the ways of the world i.e. fame and fortune.

Waheguru Teachings teach us to not wish for revenge. Our nature has become like that, when some hit us one punch, we will in return hit him 4 punches. But what Guru Nanak Dev Ji teaches us. To forgive everyone instead of taking revenge for what they did. This topic is linked to how should we treat Bad People, which I’ll later.

Rather Waheguru has taught their followers to be doing service and charity, the concept of Langar, which is to help others without expecting anything in return prevails. Sikhs are energetic, and they are selfless too. This can be seen even today, as Sikhs comprise 2% of India’s population, but 16% of India’s armed forces.

All the Waheguru Teachings of Life are vital in their way, as Sikhism believes in God being omnipresent, they believe that if something wrong happens with you, you do not revenge it, God will make conditions of reward/punishment as and when deserves by each human whenever needed.

Do not take revenge, God is there to do that work on your behalf

Most Important: Waheguru’s Teachings Women’s Position in Our society

Translation: Why do we call her bad or low, who gives birth to even kings.

Greater than every king/emperor that history has ever recorded, is the mother of the emperor. The mother from which the King is born is mightier thanking himself. 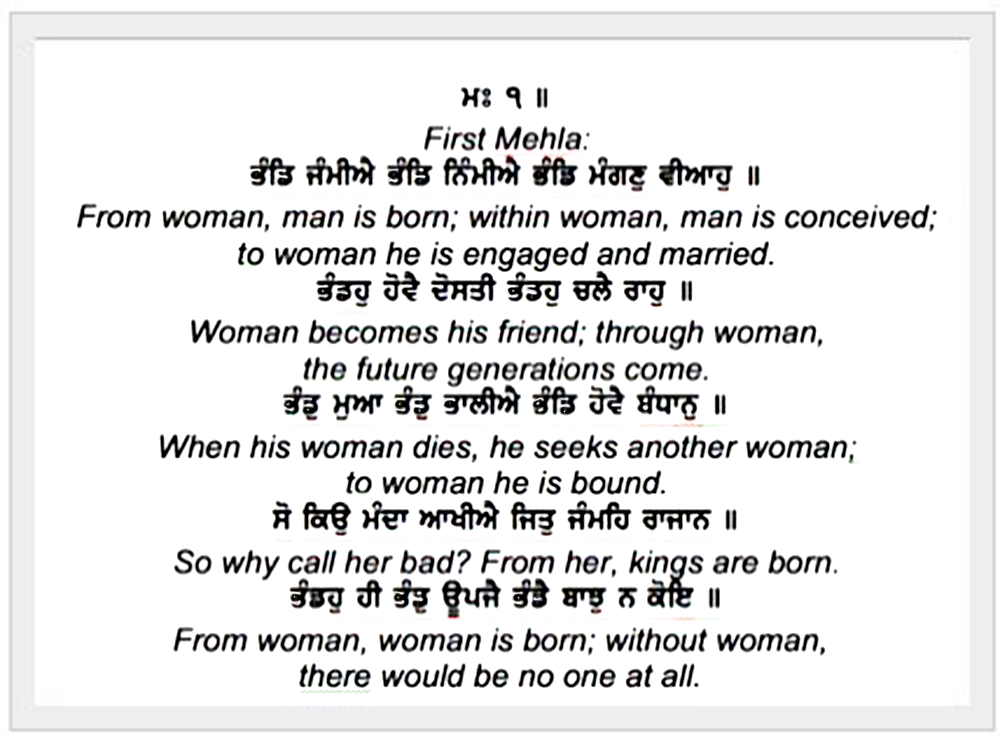 Waheguru was against superstitions, false rituals, worship of demi-gods and goddesses.

He stressed that only One God, the Formless, is to be glorified. In this way, he showed the path of truth and enlightenment.

It’s an honor for me to dedicate a small piece of my article to our GURU NANAK DEV JI whose whole knowledge cannot be summed up in one small article. Have a great day

Like every baseless malpractice, Guru Nanak also never believed in Sikhism, that false believes should have no place in the world, Waheguru’s teachings about superstition, stand true even today, we tend to believe in so many false things just because we heard them.

But we should never believe in anything without a logical understanding of the same.