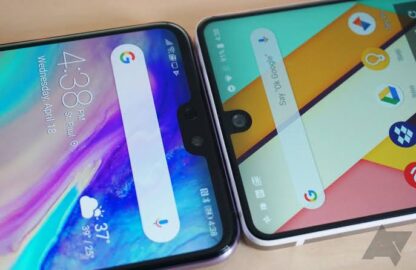 In the race to go bezeless, or to achieve maximum screen to body ratio, companies have been trying variety of approaches. These approaches include, machanized moving parts  and other include using sliding mechanisms, some like Samsung simply keep the bezel and some try huge notches like Apple. SO we will discuss all one by one.

This what the iPhone uses. The big notch, that encases all of the sensors in it. and is a black region at the top of the display. The notch is this case, is very conventional and most of the phones use it. horizontally, it does not extend to full width, and therefore gives some screen real estate on sides. This real estate shows the time, notifications etc. Though most of the companies allow you to put a black bar across bezel so that it technically, seems to be a bezel. It is a conventional style. Started by first iPhone X. Majority of phones follow this style, to attain good screen to body ratio. Some companies have smaller notches, and some have larger. Apple has one of the largest, as it has many sensors encased in it, for doing Face ID. though other companies do it by reducing sensors, mostly, remove everything other than Front Camera, and speaker. This is most common also. It is a simple solution, but the problem, is that there is less space to display notifications, and also there are many who believe that it is not that appealing in terms of looks.

Teardrop is the notch at it’s smallest. It is just basically a notch, but they shrink the camera to a really small size, and the speaker for calls in also embedded into the wall of phone in manner, that it becomes, really small. These devices have really good horizontal screen space though not full width. The only criticism people find with it is that either, it does not look good, or it compromises over quality of speakers. Besides this, it is the closest that we have reached to bezzeless without involving any kind of moving parts till now. Though there is this Samsung phone, that is in rumours, which will bring a cutout notch. In it the camera, would be surrounded by pixels also. It would be normal rectangular piece of display, with a small cutout within it that has front camera. This has no practical advantage, but the fact that there are some pixels above the camera, cause the whole edge of phone to light up, making the phone visually more appealing, Bath Tub Notch This is a big notch that occupies lot of screen space. Wierd thing is that the screen space is vertical. It is a more chunkier notch. That has larger than normal vertical real estate consumed. This is majorly in case of Pixel 3. Due to its large dual cameras, it is the most weird looking notch and can to some extent reduce or hamper functionality. Though in case of Pixel 3, it brings with itself a great front facing camera, that is one of the best in business. The Essential Phone, which almost most of us had forgot, had a quite decently sized camera, but as it was single camera it was considered more of a teardrop notch. Now let us discuss notches with moving parts.

This Popup camera notch was the first step in the direction of motorized parts. In it the things that traditionally are put in notch are encased in tray and come out when required. This was seen with the Vivo Nex, where the camera comes out through the popup when camera app is opened. The problem is that it is seriously slow. Vivo has claimed to have tested for many time, but all the phones with this design are fragile apart from being slow. Moreover as they have popup, so they are not resistant to water. This design looks visually appealing and to flaunt or show off this is a great option, but it has its own complications, like it would be difficult to get phones like these get repaired, and Phone Cases that can accomodate the moving parts also, are still not available in market in suffecience.

This is better, more clean version of the selfie popup camera, here a whole bezel of width of phone, moves up, and down. This is more sturdy, and doesn’t look incomplete. Whereas the selfie popup, when popped out looks a bit incomplete. This design of full width, can have multiple sensors as it has lot of screen real estate. Oppo Find X is as Oppo calls it’s new innovation. Oppo Find X has a new concept that allows it to have 95% screen to body ratio. They do it with the help of a motor that rolls out the top bezel. It is not a bezel less phone but a hidden bezel phone. Though it fulfilles the basic intent of a small phone with big display.

This is a seriously new concept, and eliminates the problems of the motorized and non motorized notches to a great extent. Released with Mi Mix 3, in this system, one has to manually slide the display down to reveal the camera. When not needed the camera remains hidden, and when required it comes out in no time, as you simply have to push it through thumb. Most of the people who have got to experience it, found it to be utterly sattisifing. And it has lesser latency, and failure of mechanical part is also elliminated. Though it has the possibility of dust geting trapped, and it also has cases unavailable. Though all brands selling phones with motorized notches are giving Phone cover in the notch, but it may not match the taste of all. The above was the total of all the notch designs we have seen till now. May be infuture under display notches are also possible. But till now these are all the notches.