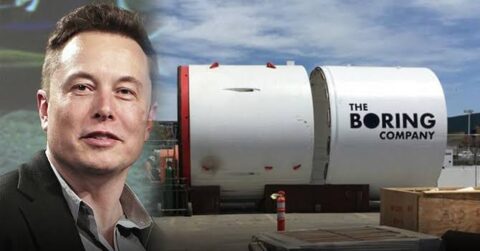 Boring Company, Another Elon Musk venture that is trying to revolutionalise our life and change the way we transport is what we are discussing today. We would be discussing it’s motives, dreams and history

Working in #Hawthorne, #California, this company makes tunnels that would be transporting cars over electric pods. The #pods at which the car would ride, would travel over 150mph. Which used tunnel boring machines to dig tunnels for transportation.

But this tunnel has a ‘whole’ lot more functionality, ordinary things don’t exist. In those tunnels or Loops as Boring Company calls them, there would be electric pods that would take cars through the tunnels. They plan to have it’s speed around 250MPH. The pods would be powered by solar energy. The tunnels would be underground providing more space on land for other purposes.

There is also another tunnel that would have partial #vacuum in it allowing cars to travel at even higher speeds. This would be only for longer routes. A tunnel has officialy been opened for a few mile stretch in Los Angeles which opened on 18th demember few days later than the scheduled time, and Boring Company has got the permission to build a tunnel from Chicago O’Hare Airport to Downtown #Chicago.

Boring Company in order to fund its projects is selling its own merchandise like hats, and many #flamethrower, believe it or not they sold like hot pancackes.

The Company opened the tunnel for public in LA, it would take sometime to smooth it out. And it is not running at its max speed also. They will be improving it out.

They are working to bring many fold improvements to the way we make tunnels also. At oresent the tunnel making rates are very high, they want to reduce to size of tunnel required per car also.

Below is what #ElonMusk’s Boring Company states for his project.

To solve the problem of soul-destroying #traffic, roads must go 3D, which means either flying cars or tunnels. Unlike tunnels are weatherproof, out of sight and won’t fall on your head. A large network of tunnels many levels deep would help alleviate congestion in any city, no matter how large it grew (just keep adding levels). The key to making this work is increasing tunneling speed and dropping costs by a factor of 10 or more – this is the goal of The Boring Company. Fast to dig, low cost tunnels would also make Hyperloop adoption viable and enable rapid transit across densely populated regions, enabling travel from New York to Washington DC in less than 30 minutes.

First, they reduced the #tunnel diameter. The current standard for a one-lane tunnel is approximately 28 feet. By using electric autonomous vehicles with alignment wheels, the diameter can be reduced to less than 14 feet. Reducing the diameter in half reduces tunneling costs by 3-4 times.

Second, theye’re working to significantly increase the speed of the Tunnel Boring Machine (TBM). The #TunnelBoringMachines are super slow. Also if you thought that Boring Company name was given just randomly, then that is not true, the tunnel ‘Boring’ machine, gives it the name Boring. A snail is effectively 14 times faster than a soft-soil TBM.  Our goal is to defeat the snail in a race. Ways to increase TBM speed: