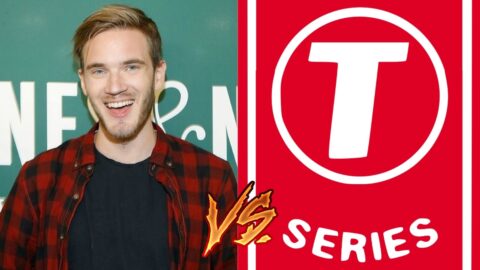 PewDiePie Vs T-Series: Battle For YouTube Throne Gets Fierce

PewDiePie is under constant fear of being de-throwned as biggest YouTuber on Earth. T-Series the biggest Indian YouTube channel and the second biggest in world.

T-Series had seen a really high gain in subscribers for past lot of time. And since 1st September 2018, the gap became really close. T-Series was predicted to cross PewDiePie on 22nd October.

Just recently has Logan Paul also started to promote PewDiePie. In the recent YouTube rewind 2018 Video, which is a recap of all major things happening in YouTube did not feature it, though there was a easter egg of PewDiePie’s Can You Do This Chair.

Many a times has T Series reached really close to PewDiePie, as close as 30k subscriber difference, but PewDiePie has been able to rebound.

Long list of YouTubers want to insure that a Indian channel, showing Bollywood songs will take over the world.

Mr. Beast created a poll on twitter asking public if he shall join hands with Logan Paul and Jake Paul to support PewDiePie. Forgetting the unethical things, people voted for the greater cause of fighting against India.

#LoganPaul, being one of the biggest #Youtubers created a automated link, clicking which subscribed the account to PewDiePie, and directed to PewDiePie’s #Youtube channel.

The fans of PewDiePie like #JustinRoberts even bought the biggest billboard spot in #NewYork City, all to support PewDiePie against T-Series. The most bizarre support he received was from this hacker who hijacked over 50,000 printers to print a message asking people to subscribe to PewDiePie. And thus marketing his channel.

At present there is a difference of around 900k subscribers, 900k is a big amount in terms of subscribers but consideries the rate at which both the channels are growing it can be covered even within a day.

The deciding factor in the war between #PewDiePie and #TSeries is not the statistics and projections, because there are 2 many other inconsistencies affecting it.

The deciding factor would be the support, whenever PewDiePie recieves support from any big YouTubers he immediately gains subscribers and same is the case with T-Series.

It is the other channels that join the war that matter the most, PewDiePie can retain his thrown till the point in time he has a major support by Youtubers.