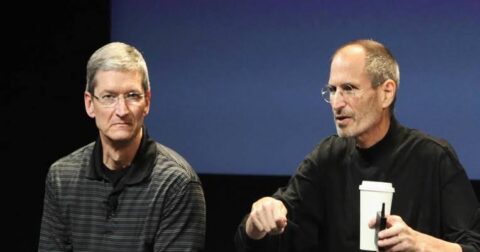 Tim Cook and Steve Jobs: How is Apple doing

Apple had been at its all time high during the era of Steve Jobs in terms of respect as well as the innovation. But now on other hand Apple has gained many major milestones like $1 Trillion in stock market evaluation.

I will explain the whole thing about Steve Jobs and Elon Musk using Bing Bang theory, but let’s understand what modt of the people assume today

Steve Jobs may or may not like Apple today, but we shall respect Tim Cook, equally as Tim Cook was Steve Jobs’

Apple now a days is considered to be less innovative, and as much as Steve Jobs challenged the Status Quo and worked to achieve the impossible. The beauty gate, the bend gate and many other problems that Apple faced are cosndiered to be criticism of Apple.

But here’s my take:

Apple has suffered a lot. From a ppint in 1997, when Apple was facing losses, Steve Jobs, came back to Apple. He got investments and uplifted it.

The result was that Apple had money. In 1998, the ARPANET became what is the internet today, it was the bing ban in world of internet, a whole set of new opportunities were emerging, new divisions and unconventional things started coming up, and there was whole lot new opportunities emerging.

It was a te when technology was at its boom, and many things being worked over for years were successful, Apple had riden on the wave.

They then intersected technology with Music to create the iPod. Which was a new hit. Then came the intersection of internet ipod and phone called iPhone. Another success.

And Tim Cook has been CEO for just 7 years. At the start of Bing Bang thibgs happened quick, newer planets starts and galaxies formed, but slowly after period of millions of years things dtarted to settle, to a point where now the universe doesn’t have significant changes for years.

Similarly now the environment is settling and somewhat setting in technology world. There are still great things happening Apple watch and Apple Tv are Tim Cook’s works. And they are still gaining momentum wheras iPhones have years old momentum.

Tim Cook has 2 things as the most important points in his Resume. These are #Airpods and #AppleWatch. And they are still at bud stage. Give them time and they shall become mainstream products like iPhones.

It’s not that i am favoring either Steve Jobs or Tim Cook. I personally am a  big fan of Steve Jobs. But we need to keep in mind that when we think of smart earphones and smart watch, we only have #Apple as a brand nothing comes close to it.

Now if we talk of failures, Steve Jobs majorly had the Antennagate, where in iPhone 4, the signal dropped significantly when held in a particular way.

If we talk of Tim Cook, there have been more including bendgate of iPhone 6, the beauty and battery gate of #iPhone Xs.

Overall in short #TimCook deserves more than he get, though nothing still competes the level of #SteveJobs

Published: 10th September 2021
Last Updated: 1st December 2018
Views: 462
Tags:#AirPods#Apple#AppleWatch#iMac#iPad#iPhone#SteveJobs#TimCook
previousWhat All Can 5G Do In The Upcoming Generation Can Be Really Appalling………………..
nextTime to play as the THIRD HORSEMEN!!!
Leave a Reply Cancel reply